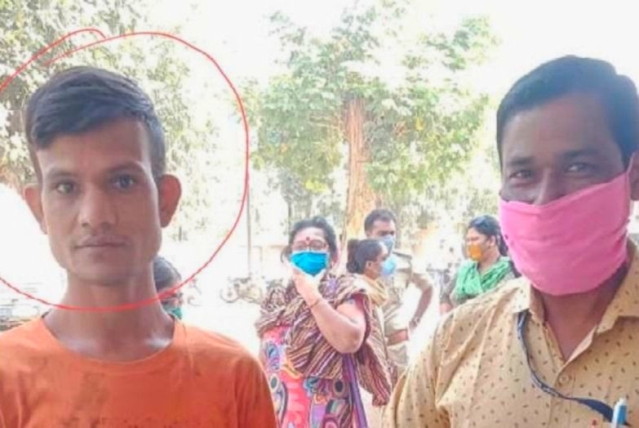 The accused, Sohidul Rehman, on the left after his arrest

A 14-year-old Hindu girl from West Bengal who was kidnapped a month ago by a much older Muslim man and was rescued from Gujarat this week, has revealed that the man forced her to read namaz and Quran during the confinement.

This correspondent has an audio recording of a conversation between the girl and a counsellor from a non-government organisation that helped in the rescue. The girl is heard saying that the man, Sohidul Rehman, forced her to read namaz and recite ayats from the Quran in Arabic.

She also says that though they did not go to a mosque to formally have a nikah ceremony, Rehman called a man home and, in his presence, read the nikahnama and made her do the same. Rehman also told her that he is her husband from now on, and repeatedly entered into physical relations with her.

The girl is a native of Hamirpur village in South 24 Parganas district of West Bengal. After she went missing on 6 October, a first information report (FIR) was registered the next day at Jibantala police station (number 456/2020) under IPC sections 363 (kidnapping) and 366A (procuration of minor girl).

A New Delhi-based organisation named Mission Mukti Foundation learnt of the case on 11 October, and took up with higher officials of the Bengal police.

Virendra Kumar Singh, director of the NGO, told this correspondent that the police then procured a call detail record (CDR) of Rehman for three days – from 7 October to 10 October – and provided it to the NGO. The data showed that Rehman was in Bihar on 8 October, in Rajasthan the next day, and in Gujarat the day after.

These details, however, were not much helpful.

“We still did not have the tower location. In addition, days were passing by and we feared that Rehman had shifted to another state,” says Singh. The NGO then sought the intervention of New Delhi-based National Commission for Protection of Child Rights (NCPCR) aka child commission.

The case was eventually taken up by the Anti-Human Trafficking Unit (AHTU) of West Bengal’s Criminal Investigation Department (CID).

It was only on 11 November that, after obtaining the current location of Rehman, an AHTU team from Bengal left for Gujarat’s Rajkot district for recovery of the girl. “I also left for Rajkot from New Delhi on the same day. Meanwhile, child commission directed the Rajkot police to cooperate in the rescue operation,” says Singh.

The girl was rescued from Jetpur in Rajkot on 12 November, two days before Diwali. In a post on Twitter, NCPCR chairman Priyank Kanoongo likened his role in the rescue operation to “Laxmi Puja”.

The kidnapper, who is 28 and is already married, was arrested on the charges of kidnapping. If the girl testifies to sexual assault in her statement to the magistrate and the medical report confirms it, Rehman would be additionally booked under the POCSO (Protection of Children from Sexual Offences) Act.

Singh told this correspondent that copies of both the formalities are awaited.

The girl was brought before the child welfare committee (CWC) In Rajkot on 13 November. An official from NCPCR, without wishing to be named, told this correspondent that the girl expressed a wish to return to her parents when told that Rehman is already married and has a wife in Bengal. The girl continues to be in the custody of Bengal CID and is likely to return to her parents this week, said Singh.

The NCPCR official shared more information about the case: Rehman would talk to the girl’s aunt (mausi) over the phone. One day, the girl picked up the phone instead of the aunt. Rehman talked to her, and told her the specific time he would be calling her next. The two began to talk regularly. Some weeks ago, Rehman proposed nikah to her.