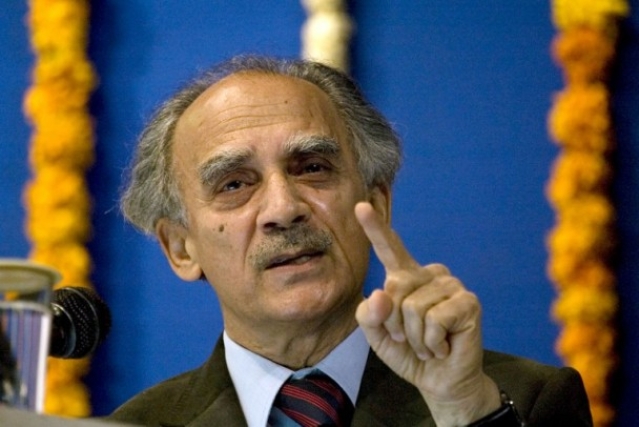 There are always two parts to Arun Shourie’s speeches – what he says and how he says it. Often the `how’ grabs attention, while the `what’ is not given any thought.

If anyone wanted to see how a man called Narendra Modi could completely reverse the fan following of the country’s leading right-wing intellectual Arun Shourie, one only had to be at the launch of T. N. Ninan’s book, The Turn of the Tortoise, in Delhi on Monday.

As Shourie lit into the Narendra Modi government in his inimitable style of public speaking, the assembled Intellectual Class of Delhi was in splits, lapping up every word and frequently applauding the man whom they once reviled as a Hindutva Hardliner and whose books, The World ofFatwas(on the issue of fatwas by Muslim religious leaders) and Worshipping False Gods (on B. R. Ambedkar), were met with the kind of righteous indignation that only India’s secular brigade is capable of summoning.

This reversal isn’t new. L. K. Advani got a whole new band of admirers when it became obvious that he was not in favour of Modi becoming prime minister and even more when he was completely sidelined. Suddenly the Hated Hawk, who supposedly had blood on his hands because his rath yatra for the Ram Janmabhoomi movement in the late 1980s was followed by a trail of riots, became a Pitiable Dove.

But lost in the applause after Shourie finished his initial remarks and walked back to his seat was an aside by television journalist Sreenivasan Jain who was moderating the discussion: `wooh, this is what you get when you keep Arun Shourie out of your cabinet.’

Was Shourie speaking out of pique? An unqualified yes, would be the answer from many former admirers who are also Modi’s, fans and cannot get over the fact that their intellectual icon is attacking their political icon.

But there are always two parts to Shourie’s speeches – what he says and how he says it. Often it is the `how’ that grabs attention and is slammed or applauded, depending on who or what the object of his acerbic wit is. It is the `how’ that prompts questions about motives. But when it comes to the `what’, there is no denying that Shourie was right on many counts, never mind why he said it.

Shourie was on weak ground on two occasions. At one point he said people are now remembering doctor-saheb (pointing to former Prime Minister Manmohan Singh who was sitting in the audience) and saying aur kuch nahin to sayana to tha (if nothing else, at least he was wise). But this was the same Singh whom Shourie had dismissed as `eminent careerist’ in the course of a television interview in the dying days of the United Progressive Alliance government (when the interviewer had referred to Singh and Montek Singh Ahluwalia as eminent economists).

Shourie was right that businessmen complained bitterly in private about the Modi government even as they publicly gave it 9 marks out of 10 for performance. But this is not a post-May 2014 phenomenon. Businessmen have the same publicly-servile-privately-grousing approach with every government.

There was little mention during the panel discussion of the fact that not only is the fiscal deficit coming under control, the quality is also improving with the share of capital expenditure getting higher; that the roads sector is seeing a lot of traction; that growth is picking up slowly. These are things happening beyond the managed headlines that Shourie spoke about.

But the fact that the government is doing some things right does not take away from the fact that there is little action on several other crucial fronts. This inaction could have consequences that could negate the other gains.

Can the Modi government’s ardent supporters deny that banking reform is proceeding very slowly? As Ninan (who can’t be said to be speaking out of pique) said when asked what is the one suggestion he would give the prime minister if he met him, the government needs to focus on setting the banking sector right.

The government has taken several steps to improve financial inclusion – Jan Dhan Yojana, payment banks, Mudra Bank – but the public sector banks, which account for over 70 per cent of the banking sector, are still nowhere close to autonomy, Indradhanush notwithstanding. Was Shourie wrong to flag this or point out that the government must ensure the independent directors on bank boards are truly independent?

Was Shourie wrong in pointing out that tax administration continues to be harassment-prone? Anyone who has dealt with the tax bureaucracy will testify that it continues to run riot, unchecked. Does reining it in require legislation? Can the Modi government deny the self-goal it scored on MAT?

Was Shourie also wrong in pointing out that the Modi government takes an aggressive position on controversial issues at first and then quickly backs down? That is what happened in the case of the land acquisition law and many commentators seen as pro-Modi have pointed to this folly.

Was Shourie wrong in pointing out that disinvestment is a sham since the Life Insurance Corporation is picking up the majority of the shares of the public sector companies that the government has put up for sale? Is this government’s disinvestment strategy any different from that of the UPA?

Question Shourie’s motives all you want, but there is no getting away from the fact that the Big Change that the Modi government held out hopes for has just not come. Let not Modi induct Shourie into his government if he doesn’t want. But go beyond the why and how of his words and focus on the what.