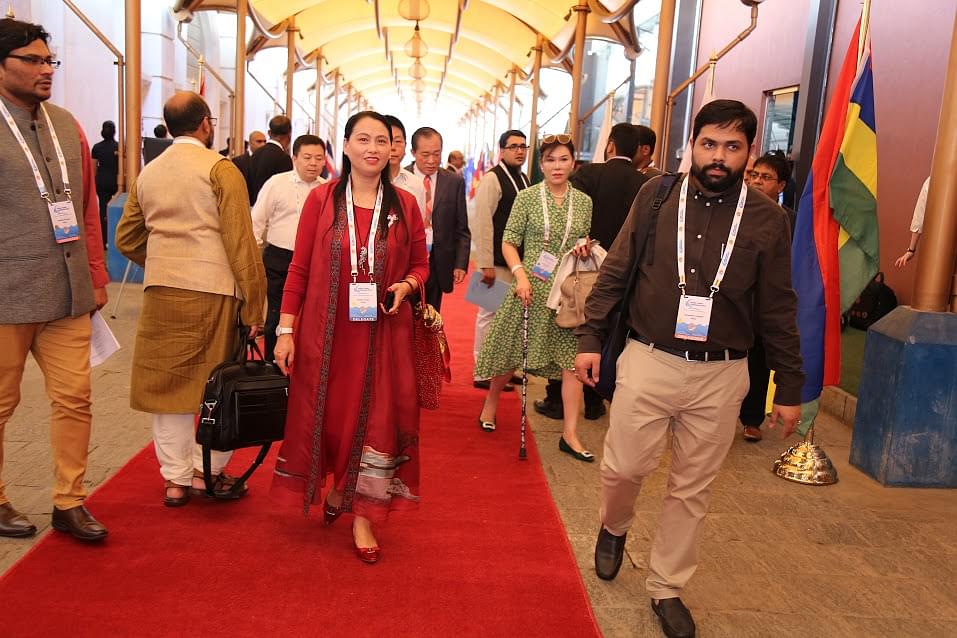 Delegates at the conference

India has its sights firmly set now on the high seas, what with a significant policy shift – from a land-centric approach to one that encompasses the oceans too – having occurred under Prime Minister Narendra Modi. And as a natural corollary to that, India now also needs to leverage its geographical advantage and play a major role in the Indian Ocean Region (IOR) by facilitating a coalition of IOR littoral states and stakeholders.

The first step towards this was taken in Colombo last week when leaders, policy makers, strategic affairs experts, diplomats, military men and top intellectuals and scholars from more than 25 nations brainstormed over two days to chart out a roadmap for peace, progress and prosperity in the IOR. The second Indian Ocean Conference, organised by the India Foundation – a leading think tank of the country – in association with S Rajaratnam School of International Studies of Singapore and National Institute of Fundamental Studies of Colombo, marked a major step towards making India’s intention to play a major role in the IOR clear to the international community.

However, India has no intention of being hegemonistic and pursuing any extractive, exploitative or expansionist agenda in the IOR. As India’s Foreign Minister Sushma Swaraj and other Indian participants at the conference pointed out, India wants to incubate and foster cooperation between all littoral states of the region as well as IOR stakeholders to ensure not only freedom of navigation in the IOR and overflights, but also lay down a rule-based dispute-resolution mechanism, encourage multi-level ties between all the nations, evolve a consensus in protecting the marine ecology, and building an IOR Parliament on the lines of the European Parliament.

The ‘SAGAR’ (security and growth for all) policy for the IOR enunciated by Prime Minister Modi during his visit to Seychelles and Mauritius in March 2015 will form the pivot for India’s actions in the region. That India will have a significant role in shaping IOR’s future and will shoulder the security and economic expectations of the IOR countries was largely acknowledged by the IOR nations. Modi’s plans to build a strong grouping of IOR nations also found a fair amount of preliminary endorsement at the Colombo conference.

Significantly, the India Foundation, which is the foremost policy advocacy group in the country, is batting for the formation of a parliament of nations of the Indo-Pacific region on the lines of the European Parliament. But such a body, feels the India Foundation, should be a political one and not a bureaucratic one. Some delegates from other nations who spoke at the various sessions of the conference alluded favourably to the idea, and that itself is a significant step.

At the inaugural session on 31 August, Foreign Minister Sushma Swaraj referred to Modi’s vision for the IOR when she recalled the role the Indian Ocean had played in forging trade, cultural, religious and civilisational ties between India and many other countries. She promised that India would use its capabilities for the benefit of all IOR countries and would play a major role in ensuring peace, stability and prosperity of the IOR.

India, said Sushma Swaraj, looks upon the Indian Ocean as a major stage to deepen its ties with IOR nations and to advance its commitment to ensure peace and stability. She also underscored the need for security of the Indian Ocean and for all stakeholders to respect international laws and norms. The Indian Foreign Minister, while identifying piracy, trafficking in drugs and humans, illegal fishing, and terrorism as the primary threats facing this region, said that India will play a major role in eliminating these threats. She also spoke of India’s disaster relief capabilities and how IOR countries are benefiting from that capability.

Sri Lankan Prime Minister Ranil Wickremesinghe mooted the idea of an Indian Ocean Development Bank that can provide money to banks in the IOR countries to fund businesses and startups across the region as a step towards building prosperity. He also called for boosting trade and economic, including banking, ties among IOR countries. Wickremesinghe hinted that established political parties across the region should arrive at a broad political commitment on regional cooperation. This suggestion found informal endorsement among delegates of all other nations at the conference.

The Lankan Prime Minister stressed on freedom of navigation and overflights in the IOR. Wickremesinghe promised that Sri Lanka would work with all countries to formulate a model that will ensure a stable order based on security and free trade in the Indian Ocean. Countries of the IOR need to emulate Sri Lanka that is signing free trade agreements with countries like India, China and Singapore, he said.

Singapore Foreign Minister Vivian Balakrishnan said that IOR countries need to embrace interdependence, eschew domination and expansionism and reinforce their commitment to free and fair trade for the region to progress and prosper. In this new age of uncertainty marked by changing relativities among superpowers, changing trade equations, the fourth edition of the industrial revolution and job losses, protectionism and anti-immigration sentiments are on the rise and free trade is being blamed. But the solution lies in greater cooperation and more free and fair trade, said Balakrishnan, adding that the Indian Ocean will play a primary role in bringing about progress and prosperity in the region.

Seychelles Vice President Vincent Meriton said that tension in the Middle East and the Korean Peninsula poses a threat to peace in the IOR. Prolonged hostilities in the IOR will be disastrous for small island economies, he warned, adding that the blue economy was a beacon that would drive the region towards peace and prosperity. He said that poverty breeds discontent and, thus, threatens peace and prosperity. Hence, poverty has to be tackled and the only way to do so is by stepping up free and fair trade that will usher in prosperity.

Bangladesh Foreign Minister Tofail Ahmed echoed Meriton in his assertion that cooperation among countries in the IOR in boosting intra-regional trade and commerce, especially through the Indian Ocean, is a must for improving the economies of the countries. This would, in turn, alleviate poverty and ensure security in the region.

Mauritius Ocean Economy and Shipping Minister Premdut Koonjo said that just as international cooperation had contained piracy, similar cooperation is required to tackle other security threats like drug trafficking. Japan’s Vice Minister for Foreign Affairs, Iwao Horii, said that sustainable development based on free trade, transparent procedures and an equitable approach is necessary while nations must resolve disputes based on international laws. The IOR countries must unanimously oppose actions of countries that threaten peace and security in the IOR region. Horii said his country would boost the capacity of IOR littoral states to tackle threats like terrorism and piracy.

Sri Lankan Foreign Minister Tilak Marapana underlined the need to have a rules-based order for the IOR, which is facing new security challenges. A common approach among all IOR countries to tackle the security challenges and boost prosperity through trade and shipping is necessary, he added. Vietnam’s Assistant Minister of Foreign Affairs identified piracy, terrorism, natural disasters and epidemics as the prime threats facing the IOR and underlined the need for IOR nations to evolve a common strategy to tackle these threats. The mechanism to tackle such threats, he said, should be institutionalised and made permanent.

The foreign secretaries of India and Sri Lanka, senior officials from Germany, Australia, the USA, South Korea, Indonesia, Malaysia, Maldives, Pakistan, Laos, Afghanistan and China, besides defence and strategic affairs experts and diplomats also spoke at the 11 sessions that spanned the conference.

The consensus that emerged was precisely what Prime Minister Modi had advocated in March 2015: that trade and commerce between countries of the IOR has to be boosted and that the Indian Ocean was the medium through which prosperity and progress can be ushered into the IOR. Modi’s plan for an IOR body that will regulate and boost trade and commerce, ensure a level playing field for all countries and a rules-based order to promote free and equitable trade, provide multiple platforms for deepening political, social and cultural ties between the IOR nations and facilitate coordination in tackling security threats facing the nations found favour among all the nations represented at the conference.

The conference, thus, achieved its purpose of presenting the India Foundation many templates to work on to promote and fine-tune India’s ambition of playing a major role in the Indian Ocean. Being a prominent think-tank and advocacy group, the India Foundation can justifiably claim to having been provided with a mandate to suggest policy frameworks for the realisation of Prime Minister Modi’s vision for India’s central role in the IOR.