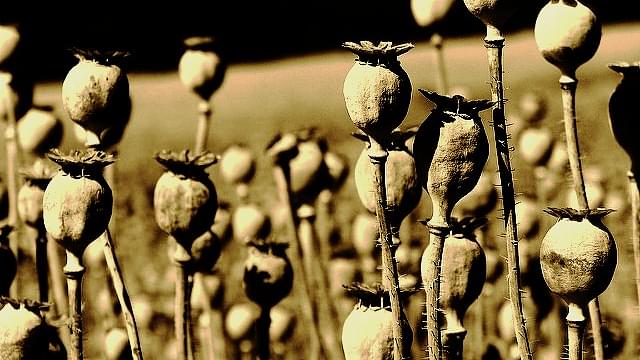 Bengal’s rural economy, especially in many large pockets of the state, has been kept afloat by illegal businesses and trades. Primary among them that yield thousands of crores of rupees annually are cattle smuggling, poppy cultivation and drug smuggling, sand mining and illegal coal mining. Though no conclusive figures are available and proper studies have never been carried out, those in the know say that these four illegal businesses generate at least about Rs 15,000 crore a year.

The most lucrative among them is cattle smuggling through the porous India-Bangladesh border, especially in the Murshidabad, Malda, Nadia and North 24 districts. A large percentage of cattle smuggling takes place from Murshidabad, which is separated from Bangladesh by the Padma river. A senior IAS officer who served as the district magistrate of Murshidabad a few years ago told Swarajya that about 500 to 600 heads of cattle - this number goes up before Eid and other Muslim festivals - are smuggled out across the river to Bangladesh every night when vigilance is slack.

Cows and buffaloes are good and silent swimmers and they are just pushed into the river with some men who guide them to the other bank. At other places, the many rivulets and canals that flow from India to Bangladesh and vice versa are used to smuggle cattle across. Even the fence along the border is often breached to smuggle cattle across and often, the fence is no deterrent to cattle smuggling (watch this and this video of cows being smuggled out of India).

According to figures given out by the Border Security Force (BSF), which guards the Indo-Bangladesh border, 1.4 lakh heads of cattle were seized while they were about to be smuggled out of the country. More than 90 per cent of these seizures were from Bengal, the rest being from Assam and Tripura. BSF officers admit that it is not possible to maintain 24x7 vigil all along the border and for every head of cattle seized, at least 20 are smuggled out. That means in 2017, more than 25 lakh cattle heads were smuggled out to Bangladesh from Bengal.

As per conservative estimates, the smugglers earn about Rs 15,000 from every head of cattle that is smuggled out. During Eid and other Muslim festivals, the earnings go up to Rs 25,000 per head of cattle. According to a report carried last week by The Times Of India’s Kolkata edition, this business generates about Rs 2,400 crore a year. But that, say those who have knowledge of this illegal trade, is a conservative estimate and the actual figure would be more than Rs 3,500 crore. They estimate that more than 1 lakh people are directly involved in this illegal business in the districts along the India-Bangla border and the total number of people benefiting from or indirectly involved in this trade would easily be more than 5 lakh.

Another flourishing illegal business that yields a few thousand crores of rupees is illegal poppy cultivation and drug smuggling across the border. According to this Narcotics Control Bureau (NCB) report, illegal poppy cultivation is prevalent in Birbhum, Murshidabad, Bardhaman, Nadia and Bankura districts of the state. The report lists out specific areas where poppy is cultivated illegally for extraction of opium. The opium is then smuggled out through Bangladesh or Nepal, say NCB officials. Once again, though precise figures are very difficult to arrive at, it is estimated that a couple of thousand acres in these five districts are under illegal poppy cultivation and the huge profits are making more and more farmers turn towards growing this illegal crop (read this, this and this report).

A senior police officer who served in Murshidabad district, where poppy cultivation is perhaps most brazen, said that in that district alone, this illicit business generates at least Rs 1,000 crore a year. That is a lot of money for a poverty-stricken and backward district. NCB officials who did not want to be quoted said that it is impossible to crack down on illegal poppy cultivation in a very organised and extensive manner due to the political and police patronage the cultivators and the kingpins of the racket enjoy. NCB officials say that illegal poppy cultivation in Bengal generates about Rs 4,000 crore a year at least.

In addition to cattle smuggling and illicit poppy cultivation, smuggling of various other drugs and commodities from across the border is also very rampant, especially in the south Bengal districts. Primary among these commodities are foodgrains, salt, fuel, cooking oil, spices and packaged foods like biscuits and noodles, garments, footwear, motor parts and engines, lubricants, and medicines. BSF and state government officers say this smuggling generates more than an estimated Rs 1,500 crore a year and a few thousand people are involved.

Illegal sand mining from river beds during the dry season is another activity that fuels the rural economy, especially in the districts of Birbhum, Hooghly, Purulia, Purba Bardhaman and Bankura. Though the government floats tenders to mine sand from river beds, a lot more than what is allowed under the contracts is mined and this mining is just about 10 per cent of the total sand mining that occurs throughout the state. North Bengal is criss-crossed with rivers and rivulets bringing down sand, rocks and boulders from the hills of Darjeeling, Sikkim and Bhutan. Here, illegal sand and stone mining, including breaking of boulders into stone chips in giant grinding machines, is rampant, and which goes on under the nose of the state administration.

Despite Chief Minister Mamata Banerjee speaking openly against illegal sand mining and the sand mafia, this activity goes on openly and widely due to the huge profits it generates (read this and this report). It is estimated that illegal mining of sand and stone mining generates Rs 3,000 crore a year, benefitting thousands. Like the other illegal businesses, this too is controlled by crime syndicates that have strong political links.

Another lucrative and illegal business in the coal-rich Asansol-Raniganj belt is illegal coal mining. Local coal mafias have taken over many mines belonging to public sector like Coal India Limited’s (CIL’s) Eastern Coalfields Limited (ECL). This news report dating back to early 2012 quotes CIL as alleging that it was incurring a loss of Rs 144 crore a year due to this illegal coal mining. ECL officials say that while Jharkhand has successfully cracked down on the coal mafia and stopped illegal coal mining, the business flourishes under political patronage in Bengal (read this report).

Coal is mostly mined from ECL’s abandoned mines by an estimated 70,000 poor people employed by the powerful coal mafias. The mafia has also wrested control of a few productive mines from ECL. About 15,000 tonnes of coal is illegally mined every day and the business generates about Rs 3,000 crore a year. And this, say ECL and police officials who would not be named, is a conservative estimate.

Thus, even though farming may not be yielding good returns in Bengal, many parts of rural Bengal aren’t complaining. These illegal businesses may be putting food on the plates of lakhs of poor people, but the black rural economy has also created many rural dons who are not only beyond the reach of the law, but are suspected to be involved in anti-national activities. And the huge sums of money generated from these illegal businesses are allegedly funding terror activities.