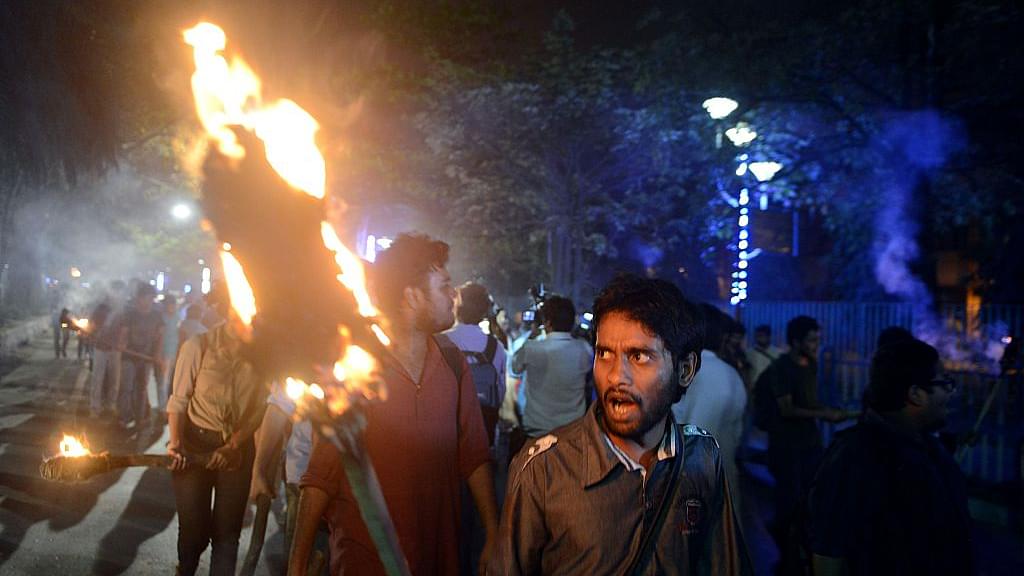 The Secular Left Outrage Brigade (SLOB) has gone into hiding. Yesterday (6 May), Left-leaning students at Kolkata’s Jadavpur University organised violent protests against the screening of a film by Vivek Agnihotri in the University after repeatedly trying to disrupt it, showing the real face of intolerance in modern India – the Stalinist face. Agnihotri, whose car was attacked on the way to campus, finally had to abandon the screening of the film midway.

As yet, there are no voices seeking to return awards, or liberals speaking up against intolerance. Maybe, the stock of Congress-given awards has been exhausted while venting spleen against the Modi government, and it will take a return of the Congress to power to replenish the stock. Or, maybe, intolerance is a one-way street – valid only if allegedly practised by the so-called Right-wing. The Left is exempt from criticism for any kind of intolerance, for, after all, they are batting for the poor, the secular and the underclass. Holy causes can be backed by unholy means.

This much was clear from statements made by students opposing Agnihotri’s film, which shows the ugly side of both Naxalism and state-led repression, in an NDTV report. “We do not welcome anybody who preaches violence and preaches Hindu fundamentalist thought in the context of present-day India where divisive politics is dividing the people,” said one protester. Another added: “We feel if such propaganda is allowed there will be fascist mobilisation within the campus.”

So a film that shows violent Naxalism and has no reference to any Hindutva agenda is supposed to result in “fascist mobilisation.”

Clearly, the meaning of intolerance is being stood on its head in Jadavpur – in the same state that recently took pride in holding a Ghulam Ali concert after the Shiv Sena blackballed him in Maharashtra for being a Pakistani singer. Ghulam Ali is fine, but a film on Naxalism has to be thwarted Shiv Sena-style by the Left, and this intolerance too is fine. Fascism was on display in Jadavpur, but the Leftie student fascists failed to look in the mirror.

This is classic Left-wing double-think: Bring out the SLOBs when it’s your dubious cause you are championing, but maintain radio silence, or even back active intolerance, when it’s not your cause.

Incidents of Stalinist outrage have been rising in campuses dominated by the Left. We need not get into the JNU incident, where students shouting anti-national students were defended as pro-free speech liberals.

But another Leftist citadel, the Centre for Studies in Developing Societies (CSDS), discriminates against the sole voice that looks at issues from a non-Left angle. A few days ago, CSDS’s oldest serving professor, the redoubtable Madhu Kishwar, sent the Centre a legal notice for discriminating against her, and specifically denying her an institutional affiliation for availing herself of the Mahatma Gandhi National Professorship awarded to her by the Indian Council of Social Science Research (ICSSR).

This is ridiculous, since ICSSR is funded by the same HRD ministry that also gives CSDS core funding. So taxpayer money is used to deny true recognition to someone who does not fall into the “SLOB” consensus range. Academic intolerance is on show again.

In recent months, after raising a hue and cry over the murder of Mohammed Akhlaq in Dadri by alleged Hindu activists, similarly gruesome murders drew no condemnation from SLOBs.

In October, a Bajrang Dal anti-cow slaughter activist was hacked to death – but there was not a yip from the SLOBs.

In January, Muslim mobs attacked a police station in Malda, allegedly to protest against the remarks made by one Kamlesh Tiwari about the Prophet. But not one squeak from the SLOBs. Muslim groups protested in several places, some even shouting pro-Islamic State slogans, demanding death for Tiwari, but no outrage – even lip service – was seen over this demand for vigilante justice.