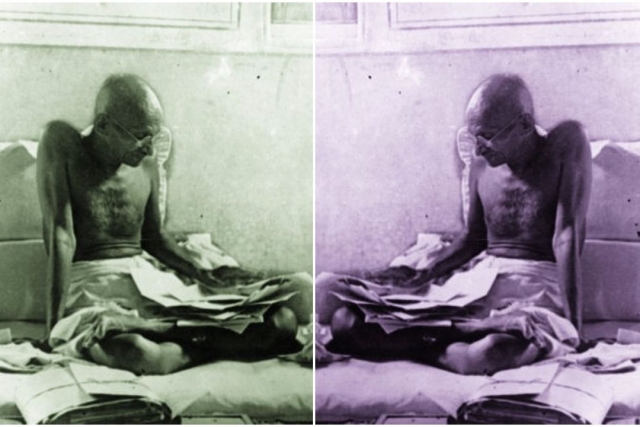 Mohandas Karamchand Gandhi (1869-1948) should be considered as one of the chief contributors to human civilisation and evolution, no less. He declared himself a Sanatani Hindu, repeatedly, when such a label was considered (and is still considered) a derogatory term.

Unfortunately, there is a tendency among the new breed of Internet Hindu warriors to defame Gandhi and underrate his contributions. From a Dharmic point of view, nothing can be a greater blunder than this.

Gandhi definitely is not above criticism. He had committed his share of blunders, which had affected the lives of scores of Hindus — Sikhs and Buddhists included. Yet in the grand canvas of history, he explored means to assert an assimilative Hindu identity when the Hindu nation was being attacked by aggressive proselytising forces.

Can his strategy work with respect to Christianity and Islam? Frankly, even a century is too small a time to tell for sure that the strategy had failed. But a century is good enough time to do a course correction.

In this respect, Khilafat movement was a blunder. It created a platform for Islamist with the toil and sacrifice of Hindu leaders. This platform would later give rise to the Frankenstein — the Pakistan movement.

At the same time, what about the ‘Ishwar Allah Tere Naam’ approach? Today, there is much cruel happiness in telling the people that those lines were not in the original hymn. Today, we have scholars among us who point out that ‘Sarva Dharma Sama-Bhava’ was a term coined by Gandhi, and is not part of any of our ancient tradition.

Here we are doing injustice to Gandhi and hence to our own selves.

The Sarva Dharma Sama Bhava and Ishwar Allah Tere Naam definitely can be traced to ‘ekam sat vipra bahudha vadanti’ which the Goel-Elst school would at once point out cannot be extended to Abrahamic religions.

At one level they are right. But let us take the entire context in perspective.

Dr B R Ambedkar pointed out an interesting aspect in the context of mahavakyas. Pointing to the usual missionary/Western Indological criticism of ‘Aham Brahmasmi’ as an egoistic statement, he pointed out that that criticism could have been valid had it stood alone. But taken together with Tat Tvam Asi, the mahavakyas become the spiritual basis for democracy as a way of life.

Similarly, had Gandhi only spoken about Ishwar Allah Tere Naam and stopped there, he could have been considered as misinterpreting and taking the Vedic dictum out of context and applying to Abrahamic religions. However, one should take into consideration the following facts:

So where does that leave one? Where does Gandhi stand after rejecting conversions, asking the forcibly converted Hindus to be reconverted back to their ancestral fold, and then singing Ishwar Allah Tere Naam?

Consider now the fact that Chhatrapati Shivaji Maharaj called Islam and Hindu Dharma as "diverse pigments used by the true divine painter for blending the colours and filling in the outlines" of all humanity in his letter to Aurangzeb.

This approach of Shivaji or Gandhi is no compromise or dilution of Dharma. On the other hand, we see the Dharmic assimilative approach in action. If anyone is afraid of this approach, in terms of theology with respect to Ishwar Allah Tere Naam, it should be the Islamists and evangelists and not ‘Hindutvaites’.

Unfortunately, Gandhi underestimated the ground reality and overestimated his own spiritual capacity to effect that assimilation when pitted against the political Islamism, which in a tragic irony he himself helped to create. This was a genocidal blunder that is still creating human misery and tragedy for Hindus including Sikhs, Buddhists, and Buddhist tribes like Chakmas in Pakistan and Bangladesh.

None would have accepted that blunder and failure with a heavier heart than Gandhi himself.

Today, there is an attempt simultaneously to discredit Gandhi and also appropriate Gandhi by anti-Dharmic forces.

For example, Kancha Ilaiah, a pseudo-Dalit racist, who has been promoted as Dalit ideologue by ‘Breaking India’ forces, calls Gandhi as "a moral and internationally acceptable personality" for "all crony capitalists”.

He says that Gandhi could not achieve in India, the height and extent of Abraham Lincoln’s reforms in the American society because Gandhi worked within the framework of ‘spiritual fascist’ Hinduism.

At the same time, the oxymoronic species of ‘pub-Gandhians’ and ‘beef-Gandhians’ want to project Gandhi as one who was influenced solely by Christian as well as Western civil values and institutions, and who used Hindu imagery only as a strategy for reaching out to the masses. They want to promote him for his blunders and its net result — the genocidal effect on Hindu society.

Fortunately, the Hindutva leaders of Gandhian as well as post-Gandhian era have steered themselves clear of both these fallacies. Guruji Golwalkar, Deendayal Upadhyaya, Dattopant Thengadi and Ram Swaroop, to name a few, have actually taken the Gandhian worldview to the evolutionary next level, avoiding the pitfalls and doing course correction.

Whether it is self-reliance, rural hygiene, voluntary service dedicating the entire life for the betterment of the marginalised sections of the society, prevention of forcible and fraudulent conversions, sustainable development — Mahatma Gandhi has been a source of inspiration for the Sangh and Sangh Parivar organisations.

When we use data from Gandhian thinker Dharampal, we arrive at real post-colonial Dharmic framework for historiography. We should thus thankfully remember Mohandas, the Mahatma, for sowing that insightful, inspiring seed in Dharampal that grew into The Beautiful Tree.

Mahatma Gandhi is definitely a jewel in the crown of Hindu civilisational history. He should be remembered as a great son of Mother India.

Criticise him but learn from his mistakes and stop vested interests from projecting his blunders as his legacy. But do not give into the lure of juvenile hatred.

Gandhi’s thoughts and values are definitely Hindu and, hence universal, should give us strength and inspiration in making India stronger and the world a better place to live in.