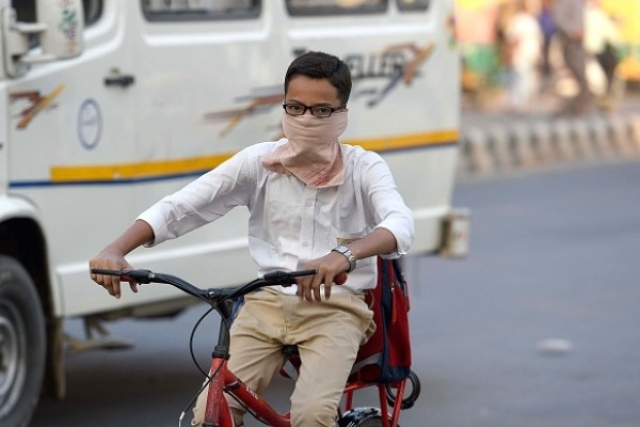 Come the months of October and November, pharmacies sell masks, foreign diplomats pack their bags, crackers draw attention, and the media and people at large from India to the United States begin taking note of Delhi’s pollution.

Delhi is no longer called the national capital, but, rather, India’s pollution capital.

As per the latest data, Ghaziabad’s air is the most polluted in the country, which is in line with last year’s data. A study by the Indian Institute of Technology, Roorkee, found Ghaziabad to be highly polluting over the last five years.

Central Pollution Control Board (CPCB) data from 30 October, for the last 24 hours, said that in terms of PM 2.5 concentration, Ghaziabad has the worst air quality, with an index value of 451. The cities that follow it are Gurugram, Bulandshahr, Faridabad, Noida, Hapur, Baghpat, Delhi, Greater Noida, Kanpur, Agra, Muzaffarnagar, Lucknow, and Moradabad, as per reports. An astonishing 11 of 14 cities with the worst air quality in India are from Uttar Pradesh, especially the western part of the state.

But while Delhi walks away with all the attention and sympathy, and all efforts seem to be directed at the national capital, Ghaziabad largely goes unchecked and gets mere token attention.

It is this fixation with Delhi that probably accounts for Uttar Pradesh, with more than 10 times the Delhi’s population, having just 11 pollution monitoring stations as compared to Delhi’s 23.

Ghaziabad itself is not just more polluted than Delhi but is also the prime contributor to Delhi’s pollution. The city, thus, needs attention not just for its own sake but for Delhi’s as well. While Delhi’s pollution is primarily blamed on personal vehicle emissions, overpopulation, and stubble-burning in bordering states, Ghaziabad faces these issues and many more.

Here’s a brief look at what ails Ghaziabad: It is an industrial city that has over 3,000 factories, of which only 431 have the required clearances. Most of these factories are clustered in the industrial township of Sahibabad, and their emissions go unchecked.

Hitting out at the industries, Anumita Roy Chowdhury, executive director at the Centre of Science and Environment (CSE), said that while there has been a substantial decrease in sulphur emissions from vehicles, industrial emissions continue to remain high.

Palash Mukherjee, a research associate at CSE, said that these industries not just pollute the air, but their effluents also cause water pollution as they, when discharged into drains untreated, seep through the soil and contaminate the groundwater.

Ghaziabad’s traffic and transport system also contribute to the pollution. Three national highways, NH 24, 58 and 92, pass through the city that witnesses heavy traffic round the clock, leading to jams and high-volume emissions. Mukherjee also pointed out that, unlike Delhi, where intra-city transport is based on the cleaner compressed natural gas, public transport in Ghaziabad is diesel-based and highly polluting.

Anand Vihar at the Delhi-Ghaziabad border, with its inter-state bus terminus serving Uttar Pradesh, Uttarakhand, and the Nepal border, is among the most polluted and dusty parts of the national capital region. It is host to countless buses running on diesel that pollute the air round the clock. Additionally, most buses plying the Anand Vihar-Meerut route are illegal run-down buses that have long crossed their stipulated life.

All of this significantly affects people’s health in and around the city. Not just the common respiratory ailments and issues concerning eyes and skin, studies have shown that traffic-related pollution increases chances of asthma in children, a chronic respiratory ailment constantly on the rise in India, and now the most common chronic disorder among children in India.

“People being diagnosed with asthma for the first time with no family history is definitely going up. As for asthma among children, they may not remain asthmatic if the triggers are taken away,” Dr Neeraj Jain, a senior consultant (Chest Medicine) at Sir Ganga Ram Hospital, New Delhi, recently told a newspaper.

While Dr Jain says children may evade asthma if the triggers are taken away, triggers in and around Ghaziabad are not going anywhere. An architect based in Ghaziabad, 27, who previously worked in Uttarakhand, told Swarajya that the air quality in the two places is markedly different. “I chose Ghaziabad as it is closer to Delhi. Nobody warned me about the pollution because maybe they have learnt to live with it. But I find it difficult to even breathe at times. And I just cannot move out of the house in the evenings.”

“I have made up my mind to move out soon. There is no way I will bring up my children here,” he said.

Saurabh Goel, a shop owner near the busy Ghantaghar chowk market, told Swarajya that his 11-year-old daughter had begun to show symptoms of asthma and that had made him very worried. However, he says he is helpless. “My three generations have lived here and done business here. Where will we go now? All we can do is stay as much indoors as possible.”

The poor state of healthcare in their home state and the increasing focus towards discriminatory practices in Delhi further add to people’s woes. Goel’s brother Vivek said that unlike Delhi, the administration doesn’t make any visible efforts to spread awareness on combating pollution, so residents don’t always understand how it is slowly killing them.

Despite the grim state of affairs, there seems to be no action, but only reaction on the part of the administration. Schools are closed, water is sprinkled, and construction activities are halted every year as short-term reactionary measures when the situation worsens.

The Ghaziabad administration on Monday (29 October) suspended all private construction activities till 10 November. The administration is also gearing up to implement the apex court’s order prohibiting 15-year-old petrol and 10-year-old diesel vehicles in the NCR. Their record, however, has not been good at implementing such orders. The National Green Tribunal had earlier imposed the same ban in April 2015, and then again in July 2016, but the administration had failed to implement it.

The budget to battle pollution has also constantly been slashed in Uttar Pradesh over the years, falling from Rs 4.5 crore per year to around Rs 50 lakh. The government has appealed to farmers to not burn stubble and has claimed to be working on a long-term solution that revolves around making biofuel from the crop waste that farmers burn.

While the administration keeps taking reactionary measures year after year and the government keeps talking of ambitious projects, a solution for people choking in the country’s most polluted city does not seem to be materialising.