Government On The Brink, Thanks To Family Politics 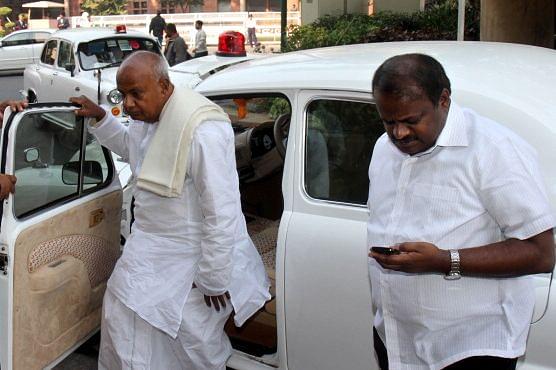 From December 2018 till 1 July when MLA and mining baron Anand Singh resigned, things had gone awry, but it was spoken of in bated breaths. But the 10 MLAs of the Congress and three MLAs of the Janata Dal (Secular) were not to be cowed down; they decided to rise against the interference of the most powerful political family of the state after the Congress’ Gandhi-Nehru family.

Byrathi Basavaraj, who is the most outspoken among the rebel MLAs, had gone on record outside Rennaissance Hotel in Powai, Mumbai, on Thursday just before they left for Bengaluru, saying, “Deve Gowda and his sons H D Kumaraswamy and H D Revanna were the whole and soul of the present coalition government; all transfers, funds and many developmental works were taking place only with the consent of the family”.

Though Kumaraswamy is the Chief Minister, his brother Revanna was believed to be calling the shots in the most important ministries, boards and corporations. “Our leader Siddaramiah had apprised Congress president Rahul Gandhi and his mother Sonia of these developments before the Lok Sabha elections, and wanted the Congress party to step away from the coalition,” Basavaraj added.

Rule Of The Mafia

S T Somashekar, leader of the rebel MLA camp and a former policeman, giving the example of the BDA, said, “Wherever there is land involved, strong lobbies were created around the organisation to take control over it. Strong IAS officers were planted in those organisations, and they were rewarded for doing the family’s bidding. In case they did not cooperate, they would be arm-twisted. Why then are other political leaders required if an entire family alone calls the shots? Why has the government made a secretary-level officer the Commissioner of BDA? He should be sitting in Vidhana Soudha? There is more than meets the eye.”

Within the Congress party too rumblings have been witnessed right from Day One of the coalition government. Siddaramiah himself was not happy with the way Revanna started gaining undue influence over the coalition. In his submission to Sonia Gandhi during one of his visits just before the Lok Sabha elections, the former chief minister had said that if the Congress party did not come out of the coalition before the Lok Sabha elections, the party’s image would take severe beating. His worst fears did come true, as 2019 was among the worst performances of the Congress in Karnataka.

Blood Is Thicker Than Water

When Deve Gowda was defeated in Tumakuru, and his profligate grandson and son of the Chief Minister, Nikhil Kumaraswamy, lost from Mandya, A H Vishwanath, a JD(S) leader, was made party president. However, he too knew that this was a sham and his story would be short-lived. The JD(S), it appears, wanted to put up a show that it was not a family party and that it could choose someone at arm’s distance for the post. But Vishwanath knew only too well that this was just optics. Soon, he too demitted office and joined the rebel camp.

Sources close to Vishwanath told Swarajya that there were at least four family members exercising pressure on him to return.

It is not just the Congress, but even the BJP has suffered under the 20-20 arrangement with the JD(S). It may be recalled that the JD(S) did not hand over the chair of the chief minister to the BJP after 20 months of administration, as per the agreement between the two parties. B S Yeddyurappa on Friday recalled the “friendship” his party had with the JD(S) and said that was one of the grave mistakes the party ever committed.

“I said this very clearly when I lost majority in the House after the coalition came to power. I stated on the floor of the House that the family-based party will not allow any democratically managed parties to stay afloat, their sense of personal entitlement and fiefdom will not allow normal functioning of the government,” Yeddyurappa had said.