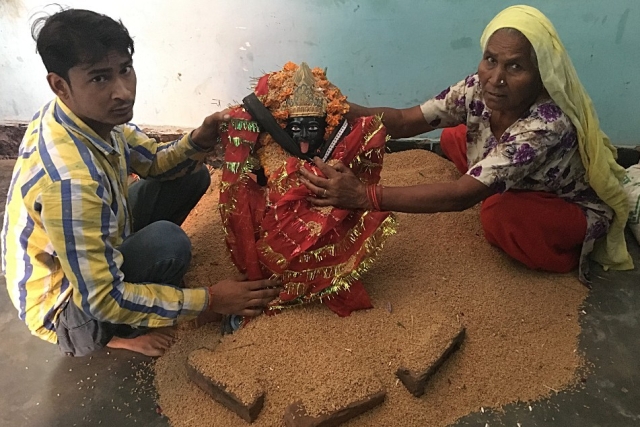 'Dalit families in UP threaten conversion after permission denied to install idol in temple'.

This headline, or a slight variation of it, was recently put out by a number of news publications. This was about a case in western Uttar Pradesh's Incholi tehsil, some 100 kilometres from New Delhi.

As immediate reactions on social media suggest, this is what most readers deduced from the headline: that 'upper caste' groups, possibly Brahmins, in perpetuation of caste oppression, stopped 'lower caste' groups from exercising their rights on a place of worship that is supposed to treat all Hindus equally. That more than six decades after discrimination based on caste was made illegal, upper castes continue to do it with impunity, leaving lower castes with little option than to quit the oppressive system and embrace a caste-less religion. Right?

A visit to the village and conversations with both sides and other villagers reveal a picture quite contrary to what the headlines suggest.

It turns out that the tormentor - the group that allegedly stopped the installation of the idol - is also a Dalit group. In fact, both sparring sides are but one Jaatav (a Scheduled caste) clan, or kunbha as is known in local lingo. The dispute involves a piece of land and not the right to free worship. This is evident from the fact that several temple priests, including Brahmins, have offered their premises to install the idol. The threat to convert to Islam, in the family's own words, is to teach the other side a “lesson”.

It was Rajkumar, 54, who appeared before news channels to declare the intention of 50 families to convert to Islam if their idol of goddess Kali was not installed in the choice of their temple.

As I enter his house on Kunkura Road in village Mussoorie, several women including his mother Bedo Devi direct me to a small room that has a mound of wheat. They bury their fingers into the wheat and produce a feet-long idol of goddess Kali.

Bedo Devi bursts into tears. "It is the third day of Navratra [on Friday] and our devi is buried here in anna (grain). She is denied her space and subject to humiliation. Who is going to bear this sin but us?" she says in between sobs and rests the deity in the mound as before.

Rajkumar then directs me to another room so we can talk at length, but first points to the framed pictures on the walls. Portraits of Narendra Modi and Atal Bihari Vajpayee are placed alongside Hindu deities. "I am a big Modi supporter. I have supported BJP (Bharatiya Janata Party) all my life," says Rajkumar, and goes on explain why this information is relevant to the controversy at hand: "Please do not think that we are not proud Hindus. But we are forced to consider conversion to Islam because of the apathy of the administration.”

He narrates his side of the story: There is a Shiva temple some 200 metres from his house where the family routinely prays. Some weeks ago, he expressed his desire to install an idol of Kali in the temple on the first day of Navratra. The temple already has idols of Shiva and Hanuman. Managers of the temple welcomed his proposal. One of them, Shivcharan, even accompanied him to Hastinapur to buy the idol that cost Rs 11,000. Rajkumar had raised funds for the idol from his mohalla (colony) and it was the residents' collective wish to see that the idol is installed with proper rituals. Cement and bricks were bought and kept for use at the site.

Things were going well until the D-day arrived.

On Wednesday, when he went to the site, he found that the families around the temple had thrown the bricks on the road and spilled the cement. Rajkumar was told that the idol cannot be installed as it would take up the community space in the temple that is used for activities like havan, bhandaras and weddings.

An aghast Rajkumar returned and gave a written complaint to the additional district magistrate requesting their intervention and threatening that if their idol is not installed, several families in the mohalla would convert to Islam. To the media, Rajkumar said, "We are Hindus. If we can't put a goddess idol in a temple, then where should we go? It's better to convert."

This statement is not exactly honest, for the family was not denied their rights as Hindus.

The opposing group offered Rajkumar an alternative site less than fifty metres away from the Shiva temple. However, it was unacceptable to Rajkumar's family. "That site opens to a jungle. There is no way I am keeping my 'ma' (mother) in a jungle," Bedo Devi says. "Moreover, Kali cannot live alone. We need a Shiva there too."

Mukesh Giri, a Brahmin pujari of another Shiva temple, also offered his premises. But this proposal too was turned down by Rajkumar's family. "There is already a Kali idol in that temple. Can Shiva live with two goddesses?" says Bedo Devi.

Rajkumar says the villagers are suggesting other options but it’s not fair to them. "Our question is, when they initially agreed to our proposal, why make a U-turn now? I would have never brought the deity in the first place."

I walk over to "that side", where 10 people including Shivcharan have been named as accused in the complaint by Rajkumar. Curiously, not one of those named is available or willing to talk. But several other residents huddle around me to give their side of the story. They say that families of both mohallas are related to each other and all are but one clan. They rubbish the BJP-BSP theory.

Amit, who works as a labourer, says, "Rajkumar has a government job. Everyone in that mohalla is well off. They can marry their daughters at any venue. On the other hand, our mohalla is poor. All we have is this temple. Why do they want to eat into our tiny space?"

Monty, a student, says, "This is not even a temple but a dharamshala. This premises is used for rest by kanwariyas too. Today it is Rajkumar, tomorrow it will be someone else bringing their idol from that mohalla. We will lose the only community space we have."

The residents say that the site which Rajkumar's family calls 'jungle' can be turned into a beautiful, walled premises through collective effort, but "some people can't think beyond their moonch (pride)'".

They say it is all that is there to the controversy, a mere fight for a small space with egos at stake. Asked why Rajkumar's proposal was agreed to in the first place, Amit says, "I don't know who said yes to it. As you can see, most are opposed to it."

Asked about the threats of their relatives becoming Muslims, residents say they are not bothered. "Let them do what they want. We never suggested it as a solution," says Deshraj. "It's become a fashion to convert these days," says another resident amid loud chatter that is now making it increasingly difficult to talk.

Pujari Mukesh Giri, clad in saffron robes, calms everyone down as he throws a pearl of wisdom, "Mandir bahut hain, pooja karna wala koi nahi (there are many temples, but no one wants to pray)."

Is there any solution to the deadlock?

Residents say that the station house officer (SHO) of Incholi thana has been visiting every afternoon since Wednesday to make both sides talk and arrive at a solution. Indeed, SHO Premchand Sharma turns up shortly after.

Amid what seems like hundreds of villagers seated on the ground and perched on the walls, Premchand Sharma sits on a chair with two constables and begins the talks. He tells Rajkumar to have patience. Rajkumar replies that his patience is running out as auspicious days of Navratras are passing by. Sharma retorts, "Then show me written permission by the administration and I will ensure the deity gets installed. Have you applied for permission yet?" Rajkumar says he doesn't want to get into all that.

Tea and biscuits are passed around while Sharma dwells on the virtues of patience. He makes no visible effort to call the 10 accused for talks. He tells Rajkumar that he should not make dramatic threats like he did that "give fodder to the media" and gets up to leave. The meeting lasted more than 30 minutes.

Sharma tells me, "So you are from Delhi? Well, he [Rajkumar] is not doing anything like he says. We are trying to get both sides to talk and arrive at a solution. This is a non-issue."

Rajkumar tells me, "I am serious. I will call a maulvi on the last day of the Navratra if my deity is insulted like this. I am already getting calls from a lot of maulvis. See, check my phone.”

Bedo Devi nods in agreement. "I will donate the deity, sell off this house and shift to another village."

Rajkumar's brother-in-law, also named Rajkumar, says, "Muslims may fight a lot among themselves but in mosques, they are one. I have been working with Muslims for 18 years now," he says. "Yahan hamari koi sunwayi nahi hai (nobody gives us a hearing here)."

No amicable solution in sight, the matter is now down to legalities. Rajkumar has fetched documents that show that the Shiv Sewa Samiti that claims to manage the temple is a registered organisation but can make no claims on the temple land as it belongs to the government. Rajesh Kumar, also from Rajkumar’s mohalla, pulls out a diary from his pocket that has a record of donations made to the Shiva temple in all these years. “See, most of the donations are by members of this mohalla,” he says.

But it's quite clear that legalities won't solve the dispute. Not during the nine-day Navratras anyway. Rajkumar says it’s too late to apply for permission and he doesn’t have the will left for it. “I don’t want the devi to go through all this,” he says.

Though their conviction keeps on faltering - at one point, Rajkumar’s younger brother tells an activist that “he is a kattar (staunch) Hindu” - the family is likely to act on their threat. In their own words, "it's become too embarrassing for them to live in this village anymore".

Conversions to escape embarrassments within their own community, and conversion threats to spur administration into action, are not uncommon in this part of the country.

In the nearby Baghpat district, a Muslim family of 20 members recently threatened to do 'ghar wapsi' (conversion to Hinduism, the religion of their ancestors) to "spur police into action" in the murder case of their child, allegedly perpetrated by members of Muslim community. They acted on their threat, adopted Hinduism and shifted to another village. Again in Baghpat, a Muslim man threatened to become a Hindu if fellow Muslims who stopped him from offering namaz for undertaking a kanwar yatra, were not punished. The case received much media attention in August but there has been no follow-up reports on whether he did act on his threat.

This latest case in Incholi follows a similar pattern. It’s reportage, however, is yet another example of media’s propensity to present stories involving Dalits as narratives of caste oppression when they are clearly not.