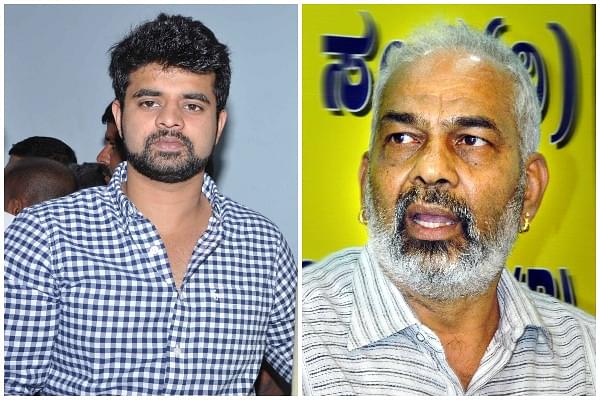 The Main Contenders: Prajwal Revanna (JDS-Congress) and A Manju (BJP)

Hassan, a district ruled by the Hoysalas for a major part of its history, lies 200 km west of Bengaluru. As it goes to the polls on 18 April 2019 to elect its MP, Swarajya hit the ground running to ascertain what issues and factors are driving the election campaign in the region.

A cursory glance at the political history of the district will reveal that the Vokkaliga-run Janata Dal (Secular) wields substantial clout over the voters.

Its candidate this time is Prajwal Revanna, son of Public Works Minister HD Revanna and grandson of former Prime Minister HD Deve Gowda. Taking him on is A Manju, an erstwhile BJP MLA (1999), and subsequent Congress Minister, now back in the BJP fold.

This correspondent chose to first visit the mandi to obtain a feel of the voters’ mind. Conversations ensued between traders, both small, and medium, which revealed an obvious preference for the HD Kumaraswamy government.

Mahesha, a banana seller, told Swarajya that the present government’s interest-free loan scheme (Badavara Bandhu) of Rs 10,000 for street vendors was a big hit and that he was inspired by the JD(S) and would vote for Prajwal Revanna.

Another conversation was struck with a condiments seller named Chandrasekhara, who too expressed his support for the JD(S) on the ground that the party helped create infrastructure for the Devraj Urs Market, owing to which they can do brisk business.

A casual chat with a cloth seller also revealed the influence the JD(S) wields in this area.

Further down, Swarajya met a provision store owner, who surprisingly had a slightly different take on the poll fight. He said the contest between Prajwal and Manju would be tight as the latter was certainly no lightweight in the district owing to his past political experience and his dedicated support base. He, however, felt that the fact that Prajwal was Deve Gowda’s grandson, and that Manju was being viewed as a “party hopper” by some might work in Prajwal’s favour.

A foray into a store selling garments gave this correspondent a reason to smile. On being introduced as a reporter from Swarajya seeking ground information, the store owner, Mohammed Umaid (name changed) said he was “well aware” of the publication and sat us down for a discussion. When quizzed on his views regarding GST, he said, initially, it had affected his business by around 20 per cent. He, however, admitted that GST was an excellent move by the Centre but slab rates needed to be low. On being asked what his idea of a maximum slab rate should be, he said it should not cross 10 per cent. He also predicted higher revenue mop-ups in the long term on this account.

In Halebid, Belur taluk, Swarajya spoke to people on the streets and some shop owners to ascertain their views and political preferences. What we gathered is that this region has only one problem, and that is lack of water. During campaigning for an earlier election, B S Yeddyurappa of the BJP had promised to bring water to Halebid from the Yagachi Dam for both irrigation and drinking purposes. Shoba Karandlaje, as Minister for Social Welfare in the then BJP government, laid the foundation stone for a drinking water project for Arsikere and Javagal hoblis.

Swarajya was told that under the tenure of JD(S) MLA for Arsikere, KM Shivalinge Gowda, the project was completed when Siddaramaiah was Chief Minister. The third phase of the project is now pending.

With as many as 50 per cent of the hoblis in Belur taluk receiving water from this project, the people are ecstatic that in the last state-budget, the government sanctioned Rs 100 crore for a check dam at Ranaghatta so water can be brought to Halebid lake (Dwarasamudra). Work is expected to commence after polling is over. The people are also hoping that the state government will revive a Hoysala-era canal between Ranaghatta and Halebid lake, and hence may look towards not antagonising the coalition if the project has to fructify.

With Halebid and Javagal being almost water-less, the average voter believes whoever promises to solve their water woes will get their votes. Further conversations revealed that happenings at the national level, though highly welcome, do not solve their immediate concerns as they face an existential crisis. With agriculture in the region performing poorly, the farm loan waiver promised by Chief Minister H D Kumaraswamy has stirred major expectations, and seem to have increased his party’s chances of winning votes in an area considered a BJP stronghold.

Another major concern for the voter is the issue of rising prices, especially that of fuel. When Swarajya asked a farmer whom he would hold responsible for the problem, he said the Centre was to blame. When reminded that the state government too had hiked fuel prices, he showed a reluctance to pin the blame on the state leadership.

Some women folk Swarajya spoke to seemed unhappy with the prices of LPG cylinders. They admitted that though the Ujjwala scheme was welcome, the price of cylinders was unaffordable.

In Belur, Swarajya spoke to Somasundara, an agri-inputs dealer, to get a sense of the ease of doing business in a small town. He said there were no hiccups in doing business, except for one major stumbling block i.e water. He said the situation was so acute that in 2012, one could get water at 300 feet below the ground, but seven years on, boring a 1,000-foot-well is the minimum action required to obtain water. When asked whether bureaucratic harassment in business was an issue in a small town like Belur, he dismissed it as a non-issue. He said everyday business was effortless as all those carrying out entrepreneurial work were local, yet aware residents.

Hassan district, unlike the main city, did not appear too concerned about the impact of a strong, central leadership at the moment. Faced with an acute farm and water crisis, the only aim of the voter at the moment is an immediate solution of these two problems, owing to which they have to look to the state government.

A few voters Swarajya spoke to said that while the Modi-led Centre’s schemes were undoubtedly laudable, the state BJP leadership did not present a picture of inspiration. They reasoned that even though all politicians were essentially manipulative, no Karnataka Chief Minister had gone to jail on corruption charges, except for probably Yeddyurappa. Such optics send the wrong message to the voter, they opined.

And with Kumaraswamy promising to implement the Ranaghatta water supply project, the voters seem to be looking to him for succour. After the victory of the BJP’s Pritham Gowda in the last Assembly elections in Hassan, the JD(S) appears to be in overdrive to regain lost ground.

Manju Can’t, However, Be Under-Estimated

Despite the influence wielded by the Deve Dowda family in the district, the BJP candidate for Hassan, Manju, is not being taken lightly. His primary poll pitch to the voter is to end dynastic politics in the region. Advocating the need for a merit-based leadership in the region, his political views are a big hit among the youth. What may be challenging for Prajwal is Manju’s acquisition of the traditional BJP vote base, transference of votes by his dedicated supporters when he was in the Congress, to the BJP, and the rising popularity of Prime Minister Narendra Modi.

Whether the JD(S) wins or not, what one may safely say is that the going shall not be very easy for the Gowda scion as the voter is slowly coming of age.

(Pictures are by Prakash P, a freelance photojournalist based in Hassan)