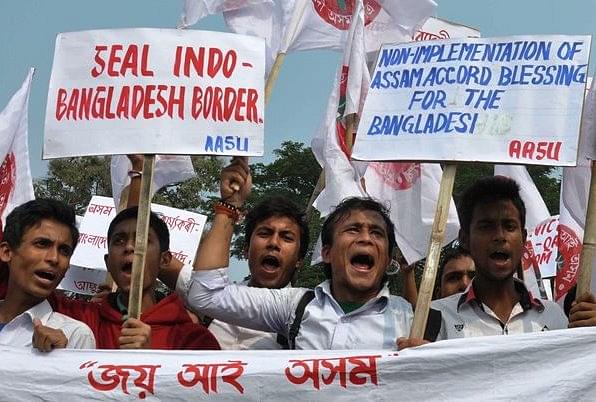 Protests against non-implementation of Assam Accord.

Assam, where Assembly elections are scheduled eight months from now, could be headed for fresh turbulence over implementation of some clauses of the Assam Accord of 1985.

The Accord, signed between the Government of India, the All Assam Students’ Union (AASU) and the All Assam Gana Sangram Parishad (AAGSP) brought an end to a six-year-long anti-foreigners’ agitation that the two bodies (AASU and AAGSP) spearheaded.

But even after 35 years, the foreigners’ issue — presence of lakhs of illegal migrants from Bangladesh — continues to rock the state periodically.

That’s because precious little has been done by successive regimes in the state and the Centre to detect, detain and deport the lakhs of illegal migrants in the state.

The reason: these illegal migrants, an overwhelming majority of them Muslims, formed a crucial vote bank for the Congress which has ruled the northeastern state for most of the last 35 years.

The tumultuous process of updating the National Register of Citizens (NRC) for Assam, and then the Citizenship Amendment Bill (CAB) brought the contentious foreigners’ issue to the fore once again.

The passage of the CAB in Parliament in December last year plunged the state into a grave crisis, with the AASU and many other organisations launching intensive protests.

The AASU and other protesting bodies held that the CAB violated the Assam Accord, which promised deportation of all those who had entered the state illegally from Bangladesh after 24 March 1971.

The CAB seeks to confer citizenship on Hindus, Sikhs, Buddhists, Jains, Parsis and Christians who had entered India from Bangladesh, Pakistan and Afghanistan till December 2014.

The anti-CAB stir evoked support from a cross-section of Assamese and other indigenous groups of the state (read this and this) who face the imminent prospect of being overwhelmed by illegal Bangladeshi migrants.

In a bid to address the concerns of the indigenous people of Assam, the Union Government constituted a committee to recommend measures for implementing Clause 6 of the Assam Accord.

Clause 6 reads: “Constitutional, legislative and administrative safeguards, as may be appropriate, shall be provided to protect, preserve and promote the cultural, social, linguistic identity and heritage of the Assamese people”.

One of the main tasks before the committee, headed by Justice (Retired) Biplab Sarma and comprising leaders of the AASU, was to define ‘Assamese people’.

But due to the preoccupation of both the Union and state governments with battling the Covid-19 pandemic as well as the devastating floods in the state, there was no progress on the committee’s report.

An exasperated AASU released the report of the committee last week. As per the report, only those (Assamese, other indigenous communities of Assam and Indian citizens) who were residing in the state on or before 1 January 1951 and their descendants could be considered as ‘Assamese’.

The committee recommended deportation of all those who entered Assam illegally from Bangladesh after 24 March 1971, to Bangladesh. Pending their deportation, these ‘foreigners’ should be resettled outside the state, the committee said.

It also wants 80 per cent reservation of Group ‘C’ and ‘D’ posts in government, semi-government and even the private sector for ‘Assamese’ people.

The committee has recommended introduction of the Inner Line Permit (ILP) system (also read this) in Assam, introduction of an upper house of legislature, making Assamese compulsory in schools, complete fencing of the Indo-Bangladesh border and protection of land rights of the indigenous people of the state.

It said that a time frame of two years should be set for implementation of the suggested measures.

Despite promises made about implementation of the recommendations of the committee, the Union government is quite unlikely to accept them.

That’s because some of the recommendations will not withstand judicial scrutiny and some are even violative of the principles of natural justice and also the Constitution.

If the cut-off date of 1 January 1951, for defining an ‘Assamese’ is accepted, the fate of all those who entered Assam between 1 January 1951 and 24 March 1971, would become uncertain.

They will be deprived of the benefits accruing to Assamese people despite being Indian citizens, and that will be patently violative of the Indian Constitution while failing the test of judicial scrutiny.

The suggestion about deporting the lakhs of people who have entered the state from Bangladesh since 25 March 1971 to the country of their origin (Bangladesh) is completely impractical.

There is no way that Bangladesh will acknowledge them to be its citizens and take them back.

Resettling them in other parts of the country is also an impractical suggestion.

Uprooting lakhs of people from Assam and sending them packing to other parts of the country will be an extremely costly exercise.

And no other state would agree to take them in.

Also, such an exercise would evoke global condemnation and censure and would, in all probability, be struck down by the Supreme Court.

There is no way even Parliament would approve such a mammoth exercise.

The committee should also have been aware of the 50 per cent cap on job reservation imposed by the Supreme Court and known that its recommendation of 80 per cent reservation runs foul of that cap.

The reservation of seats in elected bodies for ‘Assamese’ people is yet another recommendation that is bad in law and is most likely to be struck down by a court of law.

An Indian citizen (who would have entered Assam between January 1951 and March 1971) enjoying constitutional rights and privileges in Assam cannot suddenly be deprived of those.

As for the ILP, it is a retrograde measure that will severely hamper trade and tourism. If Assam wants to emerge as the gateway to Southeast Asia and beyond by leveraging the Union Government’s ‘Act East’ policy, it definitely does not need the ILP.

The ILP is, in fact, one of the greatest hindrances to economic development of states like Nagaland and Mizoram, where it is in force.

Given all these, it will be extremely difficult for the Union government to accept the recommendations of the committee. And that may trigger a renewed spell of protests in Assam.

The AASU is keen on quick implementation of the recommendations, and can easily whip up sentiments if the Union government drags its feet on it.

In the runup to the Assembly polls a few months from now, a fresh spell of trouble could thus engulf Assam.