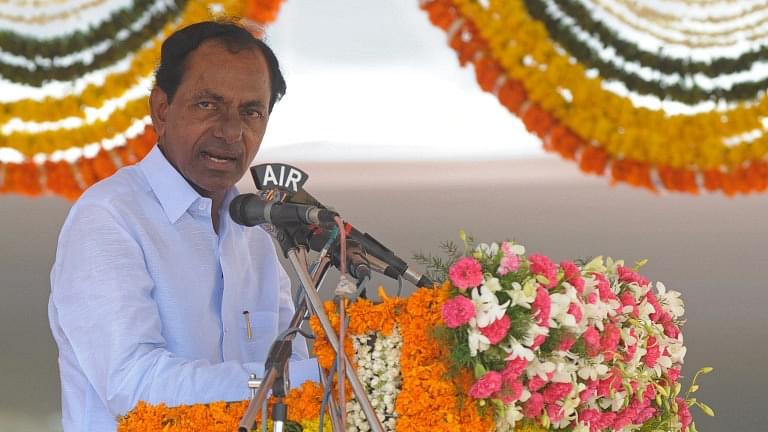 Telangana’s Chief Minister Kalvakuntla Chandrashekar Rao (KCR) announced in the state assembly day before yesterday (18 January) that his government will table the long-pending bill to triple reservation for Muslims in education and employment, from the current 4 per cent to 12 per cent, in the upcoming budget session. Additionally, he told the house that he was planning to arm the Wakf Board in the state with judicial powers.

Let’s look at these two issues, how they have panned out so far and why this pandering to Muslims is dangerous, and not just in the constitutional sense.

The chief minister has been very keen on increasing quotas for Muslims -- it was a key poll promise during the 2014 assembly elections after all, so much so that he wanted to pass the quota bill in a special session of the assembly last year, which was convened in August to ratify the GST constitutional bill. However, his decision met with procedural roadblocks. Telangana didn’t have a Backward Classes (BC) commission back then. Only the commission of inquiry had endorsed the idea. Which wasn’t enough. Only a BC commission can “increase or decrease quotas or make additions or deletions on eligible castes”, as KCR’s BC welfare minister put it at the time.

In October, the commission was set up. Then KCR wanted to introduce the bill in the ongoing winter session, but deferred his decision after Telangana’s Advocate General advised him to do so. The latter didn’t want the bill to be passed in haste only to be struck down by the courts later. He had suggested that “it would be better if BC Commission tours districts to conduct hearings on the Muslim quota and submit a report to the government. Otherwise, it would be viewed as if the panel had drafted the report sitting in Hyderabad, which may face legal issues later.”

On 15 December, the commission initiated public hearings on the matter and received about 52,000 representations, most of which supported the enhancement in Muslim quotas, as indicated by the commission’s Chairman B S Ramulu. By the time the budget session begins next month, the commission in all likelihood would’ve submitted its report. It is ready and endorses the Sudhir Commission recommendations. The commission members are waiting for an appointment with KCR. Congress, Telangana Rashtra Samithi (TRS) and Majlis-e-Ittehadul Muslimeen (MIM) have also given official representation to the commission supporting the increase in the quota.

KCR says he is enhancing reservation for Muslims not on religious grounds but on their socio-economic conditions and educational backwardness. This line of argument is obvious. Quotas based on religious grounds are unconstitutional, and will not stand scrutiny in court.

So will KCR succeed in his enterprise? One can’t be sure given the myriad ways in which jurisprudence in the country works. The legal system is confused. In 2004, Y S Rajasekhara Reddy’s Congress government had enshrined 5 per cent quota for Muslims, taking the total reservation in the state to 51 per cent. This was struck down by the Andhra Pradesh high court citing the 49 per cent constitutional limit for quotas. Cleverly, the Reddy government changed the quantum of quota to 4 per cent. This was also deemed unconstitutional by a seven-member bench of the high court. When the matter reached the Supreme Court, it passed an interim order staying the Muslim quota until a separate constitutional bench decided on the matter. The case is still in progress.

KCR wants to avoid the whole legal tangle. He plans to go to the centre directly and ask the Modi government to put the state’s law into the ninth schedule. Laws in the ninth schedule are protected from judicial review. But the centre is unlikely to play ball. The chief minister has his plan sorted out. He will cite Tamil Nadu’s example. If it can give 69 per cent quota, why can’t we, goes the argument.

We will tell the Supreme Court that the Centre had allowed the Tamil Nadu government to implement reservation over and above 50 percent quota limit  prescribed by SC since 1991 by incorporating the state reservations in the IX Schedule of the Constitution. We will inform the Supreme Court that people in Telangana State are also demanding similar exemption. Since TS is also a state in India like TN, I am 100 percent confident that the hike in the Muslim quota will overcome all constitutional and legal issues as there cannot be different rules for different states. If we succeed, we will get quotas like TN. Otherwise, both the states will lose.

KCR’s confidence (100 per cent, no less) in the ‘rule of law’ is really charming. If he wants to pin his hopes on the apex court’s wisdom, he needs to get in line. Haryana government also wants to put the Jat quota in the ninth schedule. And more important, the 69 per cent quota in Tamil Nadu is not the final word. The matter is still sub-judice.

But it’s really nice to see KCR trying so hard to deliver on issues that his voters deeply care about. He couldn’t care less whether the matter is sub-judice or not, unlike the current National Democratic Alliance government at the centre (Exhibit: Jallikattu).

Judicial powers to Wakf Board

KCR’s insatiable thirst to appease Muslims doesn’t end with a substantial increase in their quota in jobs and education. He also wants to give judicial powers to the Wakf Board. He is wooing the youth of the community with the former, and Mullahs with the latter. His government will introduce a bill in the next session empowering the board. ‘Wakf land is being illegally grabbed’ is the justification behind the move. While he is right on the encroachment of land (out of 1.3 lakh acres in both Andhra Pradesh and Telangana, the Wakf Board claims that 81,000 acres of land is encroached upon), by giving judicial powers to the board, he is barking up the wrong tree.

He has also promised to give back all vacant Wakf lands that were given to multinational corporations by the previous governments. He said:

A huge extent of Wakf lands have been encroached upon in the city and districts during the undivided AP government. Several land cases have been lying pending for years. Due to the lack of judicial powers, the Wakf Board is not in a position to initiate action against land grabbers or resume lands. We will soon give judicial powers to Wakf Board.

Very touching indeed. How can the state give power of adjudication to one participating party in a legal battle? This is akin to giving judicial power to an alleged victim over the alleged accused. This is nothing but a step towards injecting Sharia-like laws in mainstream Indian jurisprudence. KCR’s plans threaten to turn the whole idea of the legal system on its head.

But let’s excuse KCR for his outrageous proposal for a second and talk about the rule of law, equality before the law and equal protection of law. Applying his own logic (If Tamil Nadu can give 69 per cent quota, why can’t we?), shouldn’t he give the same judicial powers to temples? There are 20,000 temples in the state (5,000 of which have prominent properties). These temples have about 86,000 acres of land, but more than half of it -- 56,000 acres -- has been encroached upon. Certainly, they also qualify to be given judicial powers?

But surely, the courts would stop KCR from pursuing his openly communal and common-sense-free politics? One shouldn’t hold one’s breath. Remember, these same courts have allowed communal laws like the Right to Education (RTE), which only applies to non-minorities (mostly Hindus), and given constitutional backing to bodies like the National Commission for Minority Educational Institutions (NCMEI), which by law cannot have Hindu members. These same courts let the Sonia Gandhi-led United Progressive Alliance government overturn their own judgment in the Inamdar case (2005) by passing the 93rd constitutional amendment which sowed the seeds of sectarianism in the education sector.

But all is not lost. Yesterday (19 January), the Supreme Court ruled that churches do not have power to grant divorce decrees, only civil courts do. This means the Indian Divorce Act, 1989 will override the Christian personal law.

One hopes that the courts will not let KCR run roughshod over the rule of law.

PS: On top of it all, KCR has also increased honorarium for imams and mauzams from Rs 1,000 to Rs 1,500 per month. He has also announced that the state government will bear the cost of all self-financing courses in minority degree colleges.

Nehruvian secularists were outraged when KCR allowed his guru to sit on the chief minister’s chair for a few seconds (which was mere symbolism), but are nowhere to be found when he is openly flouting the basic tenets of secularism. That’s why they have lost credibility. But rest of us must speak up and make it count.