How Deepika Rajawat Used The Kathua Rape Case To Her Advantage 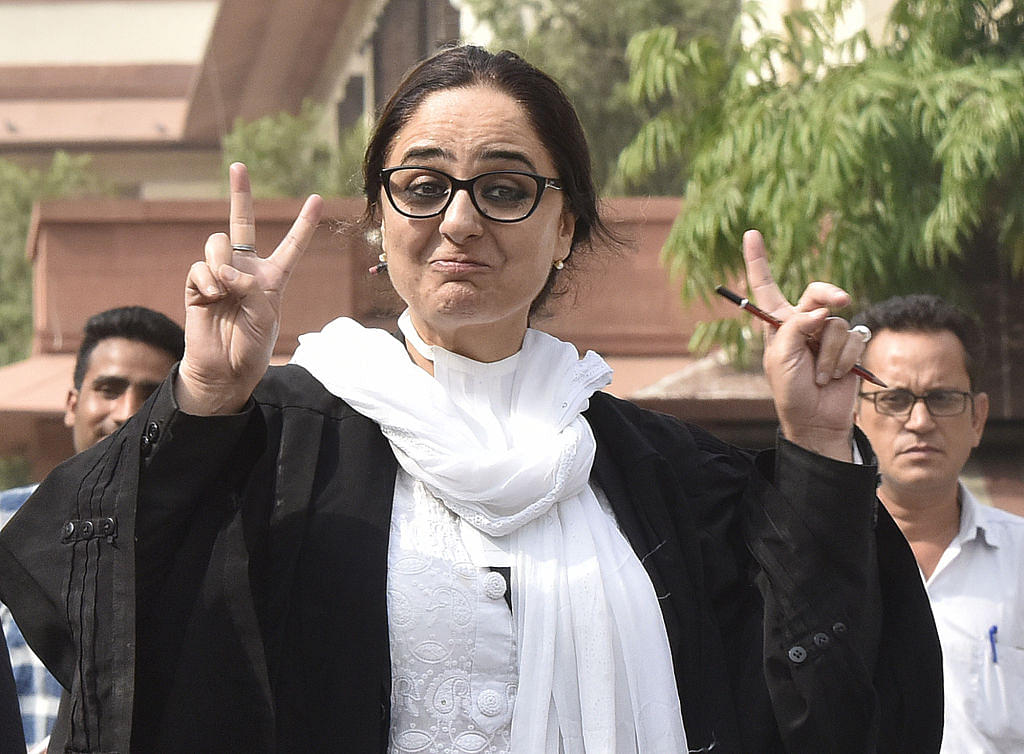 A picture speaks a thousand words, they say. Like, say, the picture of a young female lawyer striding with confidence, determination writ large on her face, her black robes ballooning around her while male lawyers and activists walk around her without being able to claim even an inch of the frame. What the picture spoke to most, including liberal feminist celebrities in a different continent, was of the resilience and the courage of the lone female lawyer taking on the cause of the hapless child rape victim. Deepika Rajawat became an immediate darling of the national and international media and was considered a force to reckon with. She was branded an icon for her times.

Earlier this month, the family of the Kathua rape victim decided to remove Rajawat from the case, citing that she has only attended two court proceedings though it is conducted on a daily basis in Pathankot. They added that they have no issues with her and would want her relived from the case, also in light of the numerous threats she claims to be facing. Rajawat, in her defense, said that once the public prosecutors for the case took over, she did not have any role to play, and hence, thought it prudent to focus on her cases in Jammu. On Twitter, she went on to blame the family of the victim by saying that it is in the genes of people to be thankless. Incidentally, the other crusader in that very picture, Talib Hussain was accused by multiple women of rape and abuse and Rajawat went on to defend him in one of the cases.

The Rajawat case gets more curious because while she was doing nothing beyond filing a writ petition in the J&K High Court in February, she spent the rest of the year collecting awards for her work. Since she did not represent the family in 108 out of 110 hearings, she was essentially collecting awards for doing … well, nothing. A report in a J&K-based portal lists out all the talk shows and awards event attended by her since April this year including one in Kerala, where she was adjudged the “woman of the century”. Though she could not find time to travel to support Asifa’s family at the court, she did find time to criss-cross the country attending protest rallies and conclaves and even international journeys to Vancouver and Geneva.

This sort of activism can loosely be translated as ‘scavenger activism’, where the pain of the victims is used as a ladder to step towards a better career, coveted adulation and often even financial gains. Using the Occam’s razor, it would be fair to conclude that such activism stems from the necessary need of self-promotion, which pushes the principles behind the engagement to the background. In the age of hash-tag activism, where social causes could act as accessories, it still takes a lot for an activist to perform the ground connect with perfection and use that as a launchpad for bigger and better things. The curious case of Rajawat seems an apt example of that, where the launchpad was selected meticulously and possibly based on principles but was very craftily abandoned and replaced with a perfect social image.

Another example which most can remember is the case of Teesta Setalwad, who was accused of embezzling funds collected in the name of the riot victims of 2002 in Gujarat. Setalwad and Javed Anand were accused of misusing the funds for personal expenses and for investing in fixed deposits. Each of the career activists can easily deflect any scrutiny of them by citing grand conspiracies. Setalwad had accused the government of Gujarat of framing her while Rajawat claims that vested interests want her distanced from the case because they are jealous of the credit and awards that she is receiving. There are others like the youth activist Gurmehar Kaur, who is a self-proclaimed free speech and peace activists, and have moved from literature festivals to conclaves to book deals to access in all the right places on the back of her ‘activism’. But in a personal capacity, she has resorted to black-mailing others.

Internationally, the cases become way more interesting with a bouquet of more strategies being put to use. Take for instance, the case of Rachel Dolezal. Biologically a Caucasian, Dolezal kept up the public pretence of being a black woman going to the extent to darkening her skin and braiding her hair. Dolezal went on to become a known face in African-American activism in the US but was revealed by her biologically parents as being a fraud with no African heritage. Dolezal hilariously went on to say she is a trans-black person and added that the idea of race is a lie. She not only appropriated the space that should have belonged to a black woman to gain popularity but she was earlier also accused of a welfare fraud.

The examples of such activism are numerous and anyone who has attended any non-government organisation-funding agency conference can possibly relate to what I am talking about. Pondering about global poverty and impoverished children and depleting biodiversity is best done in five-star hotels over a carefully curated menu with organic staples and an evening of rumination over sparkling white wine. The curious case of Rajawat is just another instance of how pain of one is the best social ladder for another – whether intentional or accidental.