How Gorakhpur Can Defeat The Japanese Encephalitis Malady 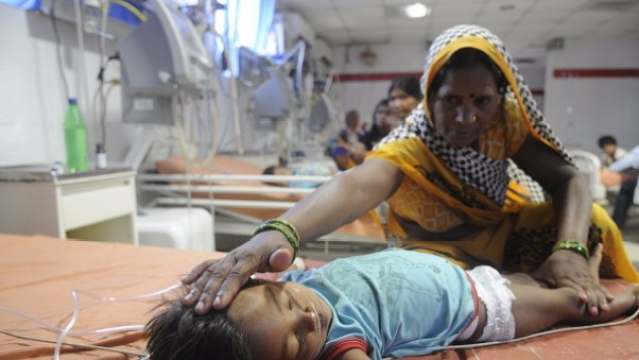 More than 60 children have reportedly died at the BRD Medical College Hospital and at least 30 deaths in two days. (Deepak Gupta/Hindustan Times via Getty Images)

When you make a mistake, there are only three things you should ever do about it: admit it, learn from it, and do not repeat it.

Baba Raghav Das Medical College in Gorakhpur, a district in eastern Uttar Pradesh (UP), became the epicentre of a controversy after more than 60 children died there earlier this month.

The story initially unfolded as a failure on the part of the hospital administration in procuring oxygen cylinders due to laxity in payment of dues to the supplier.

Even as the confusion about the cause of death continued, the debate shifted back to the old culprit, Japanese Encephalitis (JE), the child-killer disease.

JE is a viral disease that is transmitted by the infective bite of the Culex species of mosquitoes. The infection can lead to high fever, headache, stiffness in muscles, seizures, coma, and, in worst cases, untimely death. It primarily affects children because of their weaker immune systems.

In India, there are four states where JE is endemic: UP, Assam, West Bengal and Bihar. In 2016, UP contributed 25.5 per cent of JE deaths. The last outbreak in UP was in 2005. The centre of the outbreak was Gorakhpur. As many as 5,737 persons were affected by the disease in seven districts of eastern UP and 1,344 people died.

As long as Gorakhpur’s JE problem is looked at from the narrow prism of only providing for beds and medicines, it will continue to haunt the district. It is important to understand that the factors that influence propagation of vector-borne diseases are complex and sometimes fall outside the purview of the health department.

Climate: Gorakhpur, like its neighbouring districts (Siddharthnagar, Kushinagar and Maharajganj), has a particular climate that makes it vulnerable to JE. The incidence rate of JE is higher in these districts compared to the rest of the state. The temperature in Gorakhpur ranges from 8.9 C to 38.3 C. Most of the JE cases are reported between July and November with peak case load in October. The average highest temperature in October is 32.8 C. The district receives rainfall between June and August with an average of 52.2 days in a year. Murty et al (2010) found that 28 C temperature with 50-55 per cent relative humidity is the most appropriate condition for an increase in mosquito density. This hot and humid weather makes Gorakhpur conducive to breeding of mosquitoes.

Agriculture and husbandry: Gorakhpur is located in the mid-Gangetic planes between Rapti and Rohin river basins. Large swathes of land are cultivated for rice production; 152,497 hectares of land is under paddy production. One of the most important causative factors for JE is management of paddy – JE vectors thrive in irrigated paddy fields.

Approximately 63 per cent of the total workforce of Gorakhpur is directly engaged in agricultural activities. Families that depend on agriculture supplement their income with cattle rearing. Pigs and pond herons are considered to be primary carriers of the JE virus. In fact, pigs are especially considered to be amplifier hosts because once infected by the virus, they allow for manifold multiplication of the virus without getting sick themselves.

Urban development and management: It was traditionally believed that the JE virus resides in rural areas because of the presence of paddy, pigs and birds. However, emerging research suggests that the JE virus may not necessarily be constrained to rural environments. The JE virus is isolated from more than 15 species of mosquitoes, of which 10 are Culex. Culex tritaeniorhynchus and Culex gelidus are two important Culex vectors in India. Murty et al (2010) conducted a study in Kurnool in which they found that while Culex tritaeniorhynchus was more prevalent in rural areas (68.05 per cent), Culex gelidus was more abundant in urban areas (57.5 per cent). Gorakhpur is a bowl-shaped city with high groundwater tables. The gradient of the city is low to flat, which leads to problems of waterlogging and flooding. This creates ample habitation for JE vectors to thrive in urban areas.

A patient suffering from JE needs emergency care. While initially the disease is asymptomatic, after five to 15 days, the disease can show in a more severe manner when the patient develops high fever, starts getting fits, tremors and muscle stiffness, and can slip into coma. In such a situation, one needs immediate medical attention. Due to unavailability of health facilities and medical attention within five to 10 kilometres, patients need to go to far-off district hospitals such as Baba Raghav Das Medical College, one of the major government health facilities in the region. The hospital receives 2,500 to 3,000 patients every year for treatment of viral encephalitis, from Gorakhpur as well as surrounding districts.

Vector-borne diseases like JE require intersectoral coordination. The burden levied by infectious diseases cannot be borne by the health department alone. Going forward, the following steps ought to be taken:

Address agro-climatic concerns: It is important to converge climate and agriculture to tackle the issue of vectors. Keisar et al (2005) found that the highest number of larvae for JE vectors were collected when rice fields were plowed with water. Interestingly, the number declined at the time of rice transplantation, and remained low until harvesting. This has interesting implications both for climate as well as agriculture. Irrigation technologies like Alternate Wetting and Drying (AWD) methods can help with vector control. The AWD technique of irrigation refers to a way of irrigating fields where the rice fields are not kept continuously submerged. Instead, intermittent drying and re-flooding of rice fields is carried out without stressing the plants. This technique improves land and water usage, and lack of standing water helps with vector control.

Address husbandry practices: Even though pigs are considered to be primary amplifying hosts for the JE virus, Gorakhpur may possibly need to be studied as a case for poultry as potential carriers of JE vectors. According to the nineteenth Livestock Census, the total number of pigs in Gorakhpur is only 1.3 per cent of UP’s total pig population. Eighty-six per cent of Gorakhpur’s livestock comprises poultry, which is higher than the state average. In 2005, after the JE epidemic in UP, out of the 77 confirmed patients at King George Hospital, 76 patients were of pure rural origin; 79.2 per cent were children of farmers or children of labourers. Interestingly, less than half of the patients had pigs in their villages. This meant that there were alternative hosts of the viruses, like birds (Kumar et al 2006). In fact, Cleton et al (2014) found that even though ducks and chickens are considered to play a minor role in the spread of the JE virus because of low viremia (presence of viruses in the blood), young poultry can be potential amplifying hosts. This is because poultry between the age of two and 42 days have high viremia and, if they catch JE infection, they can be amplifying hosts. The state government should run campaigns to make citizens aware that pigs and poultry need to be segregated from humans. In addition, steps must be taken to immunise pigs and poultry for JE vectors.

Address urban development issues: Flood-resilient housing, solid waste management and sewage treatment should be pursued on priority. Gorakhpur gets flooded because of its topography. Climate change is likely to increase rain events throughout Gorakhpur over the next 50 years; it is expected that low-intensity rain events may increase by 2-25 per cent (Stapleton et al (2013). In Gorakhpur, 23.3 per cent people have access to tap water from treated sources, while 61.8 per cent people drink water from hand pumps. As far as sanitation is concerned, 67.6 per cent of Gorakhpur’s urban population uses open latrines for defecation.

The numbers are worse for rural areas. More than 80 per cent of the rural population defecates in the open (Gorakhpur District Census, 2011). Lack of access to clean drinking water and proper sanitation put children at risk as they ingest faecal pathogens and their immunity is compromised. This in turn affects them when viruses such as JE are endemic in unsanitary and unhygienic environments. Thus, a cycle of disease is perpetuated.

Address public health issues: Vaccination policy should be complimented with vector surveillance. There is no cure for JE. Therefore, children have to be immunised. The vaccine for JE is derived from mice brain. The first two doses are administered with a gap of seven to 14 days; the third dose can be given any time after one month and before one year of the second dose; a booster is required after three years. While immunisation is a good strategy, coverage remains low due to low levels of awareness among people and low availability of vaccines. The pure public good in vector-borne disease is surveillance of all types of vector-borne diseases. Mosquito population counts should be done for all cities and local entomological knowledge repositories should be maintained to strategise vector control.

Do not repeat it

The JE virus is the most important cause of viral encephalitis, but it is not the only type. The World Health Organization (WHO) has coined a broad umbrella term called Acute Encephalitis Syndrome (AES), under which cases diagnosed as non-JE, like bacterial meningitis and herpes simplex encephalitis, are junked. According to the National Vector Borne Disease Control Programme, even though JE continues to remain a cause of concern for UP, the number of AES cases is increasing. AES may be the next looming danger. Here is a basket of diseases that is becoming weightier every year. Going forward, scientific studies need to be carried out to understand the disease burden of various vector-borne diseases and their causes. Vector-borne diseases are determined by a set of complex interrelated social, economic and environmental factors. This means that health cannot be left to the health sector alone: it requires intersectoral coordination, cooperation and action. Traditionally, much of the government works in silos. Intersectoral action for health would require government departments to work with each other horizontally (inter-ministry cooperation) as well as vertically (at national, regional and local levels). Without intersectoral action, health outcomes will remain underachieved.

1. These numbers have been sourced from Brookings India Health Monitor, which in turn retrieves data from the latest Census, Health Management Information System (HMIS), and Rural Health Statistics. Details of computation and methodology are available here.

2. Total livestock covers cattle, buffalo, sheep, goat, pigs, horses and ponies, mules, donkeys, camels, mithun and yak. Poultry includes all birds as well as poultry farms and hatcheries. The total livestock for UP is 68,715,147, of which the total poultry is 23.5 per cent.

What Will It Take To End The Scourge Of Gorakhpur?

Depoliticising The Learnings From Gorakhpur: Can Public Health Agenda Stand On Its Own Feet?