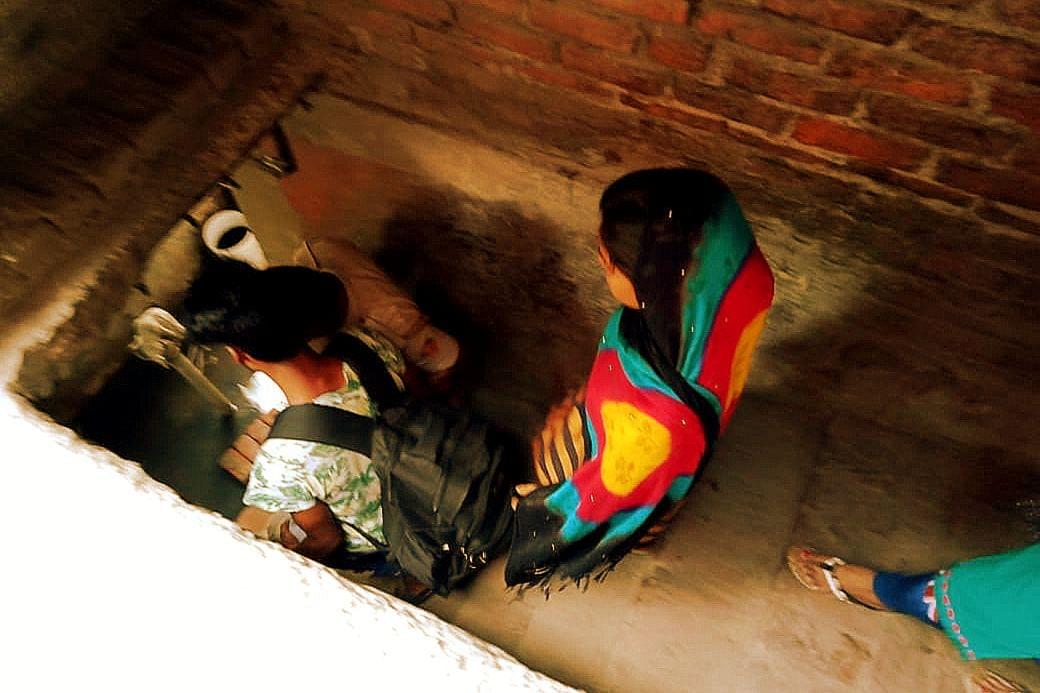 The girl being rescued after a raid on 21 April

A minor Dalit girl kidnapped from West Bengal on the pretext of marriage and brought to New Delhi in March, was about to be sold to a trafficker in Rajasthan, but the ongoing lockdown saved her.

The girl was rescued in April in a joint operation by the national child commission, Delhi police and a Delhi-based non-government organisation (NGO).

The team laid a trap for the kidnapper by posing as citizen volunteers distributing free ration.

The girl is currently staying at a women’s shelter and would be taken to her parents after the lockdown ends. The accused, Mohammad Salauddin, was arrested but granted bail.

Here’s the story of her kidnapping, the dramatic rescue operation and the prompt bail, owing to police negligence:

He told this correspondent over phone that on the early morning of 29 February, the family found the girl was not in her bed. They looked around, but did not find her.

Later in the day, they reached out to her friends and classmates. A name, Mohammad Salauddin, emerged in the conversations.

“I could not believe my girl was seeing someone. She had just appeared for her Class 10 exams. I used to pick her up from school every day. Even for her tuition classes, I would drop her and pick her up. I fail to understand where she even met him,” he told this correspondent.

Kamal, who belongs to the Poundra community, which is a scheduled caste, said that the village has Muslims in majority and Hindu families usually accompany their girls outside homes.

Kamal has two daughters; the one who was kidnapped is 16 while the other is aged 11.

On his complaint, a first information report (number 592/2020) was registered at Barauipur police station on 2 March.

When Kamal searched for the girl’s documents to produce her age proof, he found that her Class 10 admit card, Aadhaar card, birth certificate and her bank passbook were missing.

While Kamal says he mentioned Salauddin’s name to the police, the statement in the FIR makes no mention of his name.

The police only invoked IPC 363 (kidnapping).

The accused calls the girl’s family

Kamal says that after about a week, he received a call from Salauddin, who he had never spoken to before.

Kamal shared an audio recording of the conversation with this correspondent.

A brief transcript (as translated from Bengali) is given below:

Kamal: Both of you should return now

Salauddin: Withdraw the case that you have filed and I will promptly come back

Father: Is it that easy?

Salauddin: Samaresh (who is implied to be a local cop) is asking me to surrender along with the girl but she is not willing to do so. I am a Muslim and I swear on Allah that I will never give her any troubles

The father again asks the boy to return.

Salauddin: Everyone is advising me not to return; many cops live in my locality and they too are saying the same thing

Father: Cops are telling you not to bring her back?

Salauddin: They are advising me to bring her back after a few months

Later in the conversation, Salauddin revealed that all he wanted to know was the case number so his lawyer could file for bail. Kamal refused to give it.

Kamal tells this correspondent, “This relationship is unacceptable to me as the man is Muslim. Moreover, when I inquired about him, I was told he is heavily into weed and has no job. I can’t ruin my daughter’s life.”

“If he really loved my daughter, he should have come to me first. She is just a child. His intentions are not good,” he says.

Kamal passed on the phone number to the police, but it was constantly switched off.

Weeks passed and Kamal helplessly waited for the police to bring his daughter back. In the beginning of April, he received a call from her in the afternoon. She had called from an unknown number.

“All she said was that she was trapped and wanted to come back home. She said she was in Delhi, but did not know her location,” Kamal says. He gave the phone number to the local police.

By that time, a nationwide lockdown had come into effect, and inter-state travel was prohibited.

An NGO in Delhi, Mission Mukti Foundation, received a tip-off from a cop in West Bengal. The NGO took the case to the National Commission for Protection of Child Rights.

The commission directed the Delhi police to probe. Through the number, the girl’s location was traced to Khajuri Khas.

Khajuri Khas is one of the areas in northeast Delhi hit by communal violence that broke out between 23 and 25 February.

It was the same area where murdered Intelligence Bureau employee Ankit Sharma lived.

Virendra Kumar Singh, director of the NGO, told this correspondent that the police gave him two phone numbers — of families living in the colony where the girl had been kept.

The police told him that she was brought to Delhi on 21 March — a day before ‘janta curfew’.

Singh then called up the two numbers. He told the men who answered the calls that the NGO would carry out a food distribution drive in the area within two days and they must come at a given spot to collect it.

This correspondent has recordings of those conversations. One of the men, Mohammad Aqib (name changed), is heard telling Virendra that the colony has Gujjar-owned houses that have been rented to Muslims, and no ration distribution drive is being carried out in the area.

On 21 April, a team comprising NCPCR officials, cops from Khajuri Khas police station and a few volunteers of the NGO reached the spot.

When the two families reached the spot, the team questioned them about the girl in confinement in their colony. “For a long time, they kept denying any knowledge of it. Eventually, they agreed to speak on the condition that their name would feature nowhere in the police case,” an NCPCR official said.

A woman took the team inside the lane and pointed at the house; the team raided it and detained both the girl and Salauddin.

The accused gets bail, thanks to police negligence

Virendra Singh told this correspondent that in the presence of cops and NCPCR officials at the police station, the girl said that Salauddin was planning to sell her to someone in Rajasthan. “She said it in front of all officials. If it weren’t for lockdown, she would have been trafficked to Rajasthan by March end,” Singh said.

An NCPCR member, who was part of the team, confirmed it. Asked about the girl’s medical report and statement to the magistrate, the member said they have not received information from the police yet.

While one wonders what fate the girl could have met if the accused’s plan to traffic her had succeeded, the case as it stands is that the accused is out on bail.

“This happened because the Delhi police failed to present the copy of the FIR, that was registered at West Bengal, to the court,” Priyank Kanoongo, chairman of the child commisison, told this correspondent.

“The accused got a prompt bail. The FIR itself had weak charges. The police should have invoked POCSO and added section 370 at the time of filing it,” he said.

IPC 370 is for trafficking of minors; the Protection of Children from Sexual Offences (POCSO) Act, 2012, has stringent sections for sexual assault on minors.

Kanoongo said that it is this inter-state confusion that is failing to put a stop at trafficking — especially that of minor girls.

“Unless trafficking is handled by a central agency, such as the CBI, we cannot tackle it,” he said.

“When CBI was formed, trafficking was one of its focus areas. Now, state governments have limited their powers in states, and trafficking has gone up,” he said.

The girl’s family awaits their daughter

Kamal Mondal said that he has managed to talk to his daughter a couple of times since her rescue. As he awaits her, he says ‘the girl’s life has been ruined’.

Virendra Singh told this correspondent that his organisation would counsel the girl and her family.