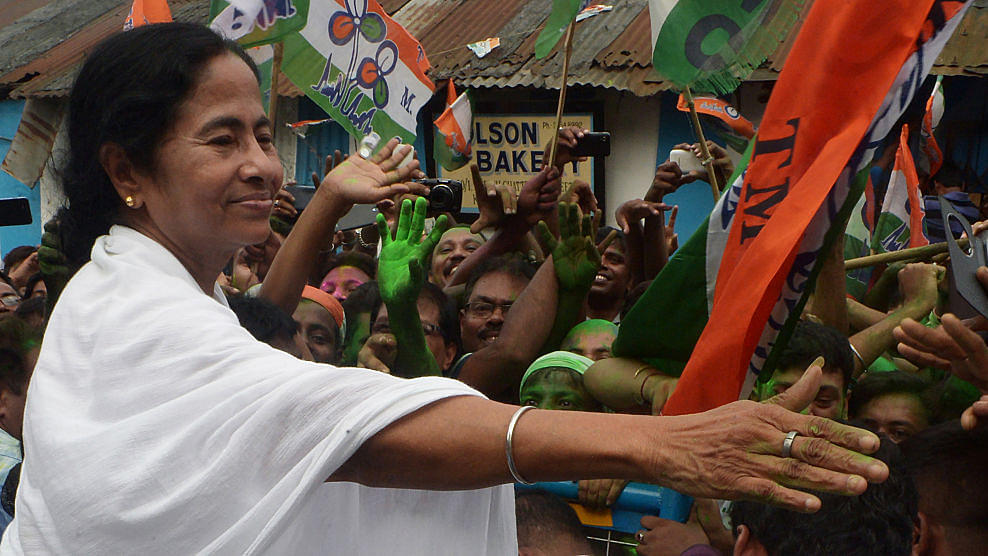 West Bengal has witnessed communal riots in as many as 12 places last week. And the embers are still glowing; all it requires is another spark to set off a major conflagration. The blame for this rests solely on the hijab-covered head of Bengal Chief Minister Mamata Banerjee.

The dates for immersion of Durga Puja idols and Muharram processions coincided this year, and last year too. While Dashami (celebrated as Dussehra in other parts of the country) fell on 11 October, Muharram fell on 12 October this year. The Mamata Banerjee government issued an order banning immersion of idols on 12-13 October to allow Muharram processions on those two days. All the household Pujas were asked to immerse their idols by 4 pm on 11 October, even before all the rituals would be over.

The state government’s order was blatantly unfair. Puja and other religious rituals on Dashami (11 October) were to get over by around 2 pm as per the tithi (dates and auspicious timings for Pujas as per the Hindu lunar calendar). After that, the ‘Sindur Khela’ (where women smear each other with vermilion and everyone bids a final adieu to the Goddess) forms an important ritual that stretches over at least a couple of hours. So there was no way organisers of the Pujas could have rushed through all these rituals and immersed the idols by the arbitrary and unfair 4 pm deadline set by the state government.

The state government’s unilateral diktat was not only unfair but amounted to interference in the religious practices of the majority community. Worse still, it was done to, as the majority community perceived it, appease the minorities. Fittingly and inevitably, the Calcutta High Court partly struck down the state’s order a few days before the Durga Pujas. The single member bench of Justice Dipankar Dutta made some scathing remarks against the state government and rightly observed that the order was “arbitrary” and “a clear endeavour to appease the minorities”.

Justice Dutta, quite presciently, observed that the state government’s order on immersions would “pit one community against another” and “intolerance would rise in the event of such arbitrary decision by the government”. Justice Dutta observed:

There has been a clear endeavour on the part of the state government to pamper and appease the minority section of the public at the cost of the majority section without there being any plausible justification. The reason therefore is, however, not far to seek.

The administration has failed to take note of the fact that Muharram is also not the most important festival of people having faith in Islam… To put it curtly, the state government has been irresponsibly brazen in its conduct of being partial to one community, thereby infringing upon the fundamental rights of people worshipping Maa Durga.

Justice Dutta also said that it is incumbent on pious Hindus to immerse the idols on Dashami or the day after that and the immersions could not be put off to a later date at the whims of the state government.

Eventually, Justice Dutta’s fears turned out to be true. But not because Devi Durga immersion processions coincided with Muharram processions on the same routes. The seeds of discrimination planted by Mamata Banerjee, and before her by the odious Marxist rulers of the state, had already taken deep roots and caused wide chasms in the society. Muslims, emboldened by the decades of appeasement by the state’s rulers that also provided them a large measure of immunity from the law, launched unprovoked attacks on Durga Puja mandaps at many places and on immersion processions.

On 12-13 October, participants of Muharram processions attacked Hindu households and shops, ransacked and torched them and destroyed cars and vehicles belonging to Hindus. Similar attacks had taken place last year when Muharram fell immediately after Durga Puja and similar discriminatory restrictions were put in place by the state administration.

But the unexpected happened this year. After being at the receiving end of discrimination for decades, the majority community retaliated this time. At Murshidabad, Howrah, North 24 Parganas, Hooghly and Burdwan districts, the Hindus launched counter-attacks on Muslims that took the latter and the state administration by surprise. The Hindus also attacked Muharram processions and houses and shops of Muslims. An enraged Mamata Banerjee directed the state administration to crack down on the majority community.

Acting on the chief minister’s directives, the police started indiscriminately arresting men belonging to the majority community. This again sparked loud and angry protests and police stations were laid siege to and roads blocked in the affected areas. In a quick damage control exercise, the police then picked up an equal number of Muslim men. But, here too, the anti-Hindu stance of the state administration was evident: while the Hindu men were booked under grave charges of inciting communal hatred, rioting, arson etc., the Muslim men were slapped with mild offences like causing public disorder and threatening people.

The retaliatory action by the Hindus this year is not surprising. Anger has been simmering for a long time over the appeasement, both overt and covert, of the minority community in Bengal. The Marxists allowed lakhs of Bangladeshi Muslims to settle down in the state and gave them ration cards and voter identity cards in return for their support in elections. These settlers not only upset the demographic balance in many districts but also started torturing Hindus and driving them out of areas where they became a majority.

Mamata Banerjee went many steps ahead and gave imams and muezzins monthly doles. She started wearing a hijab and was seen frequently in the company of Muslim religious leaders who she started courting and showering largesse on quite blatantly. A majority of the beneficiaries of Mamata’s populist schemes, like bicycles for school children and scholarships or subsidised food grains for the poor, are Muslims. Allegations of the state administration being compelled by Trinamool Congress leaders to favour Muslims abound. Mamata’s appeasement of and favouritism towards Muslims is because of the near-total support she has received from Muslims in the elections.

This, in turn, fed Hindu anger, which was exacerbated by incidents like the denial of permission to hold a Durga Puja to 300 Hindu families of a village in Birbhum district simply because a handful of Muslim families objected to idol worship in their vicinity.

Acts like this strengthened the impression among Hindus that they were being treated like second-class citizens even though they are in a majority. The Muslims felt emboldened with the knowledge that the state government would always favour them over the Hindus. And so the Muslims attacked the Hindus, thinking there would be no retaliation. But the latent anger among the Hindus boiled over and they reacted angrily this time. The result was widespread communal clashes.

Goswami and other sociologists, as well as leaders of opposition parties, say that Mamata’s appeasement of the minorities has led to a gradual polarisation of the two communities. And this polarisation, they say, will only increase given the fact that Mamata will not stop appeasing the minorities. If anything, her appeasement of the minorities will only increase, and this will only fuel more anger among the Hindus. That will make Bengal a tinderbox waiting to explode at the slightest spark.