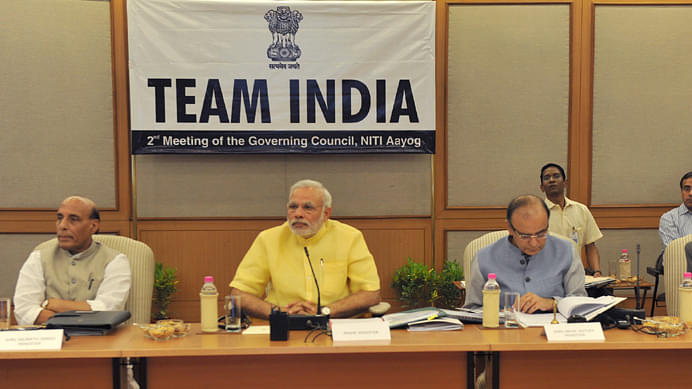 A meeting of the NITI Aayog

The Centre’s think tank, Niti Aayog, has decided to set up a ‘nudge’ unit to help the government implement its schemes in a more effective way. The proposed unit will come up in association with the Bill & Melinda Gates Foundation. Aayog will soon seek Cabinet approval for the same.

Anirudh Tagat and Sowmya Rao explain, in layman terms, what nudges are.

At a conceptual level, if you think of policy design as the map and development outcomes as the destination, then nudges can be the road signs that gently guide you towards the best route.

This may sound patronising, but there is enough evidence out there which tells us that people make irrational choices all the time. After all, we are not machines that weigh costs and benefits every single time before reaching a conclusion.

In this scenario, nudges can be used as policy tools to help bring about behavioural changes and necessary policy corrections to help make various government programmes more effective.

Livemint’s executive editor, Niranjan Rajadhyaksha gives an example of toilets. He points out that even people who have access to toilets defecate in the open. This is more rampant among people from the older generations living in rural areas. It’s not that they are not aware of the harms of open defecation, but as Rajadhyaksha writes, people are more sensitive to losses than gains, or loss aversion. So, if you tell them how open defecation will harm their community rather than how it would benefit it, they would be more likely to listen to you.

Changing social attitudes is a big task. Using nudges can make the task of policymakers a lot easier.

Which other countries are using ‘nudge units’?

Tagat and Rao give examples of Israel and Singapore, both of who have gained from this experiment. They write that in Israel, the issuing or renewal of an ID, like the passport or driving license, became conditional upon answering the question of becoming a registered donor. “The default option was an ‘opt-in’ provision, which greatly increased the list of registered donors by targeting the status quo bias,” they add.

They also mention that in Singapore, the government started printing the average electricity usage of the locality on the back of bills. This nudged households to think about their own energy consumption, driving them towards reducing it to the average levels.

Australia and the United Kingdom have their own behavioural insights teams aiding their governments in improving the efficacy of their policies.

How ‘nudging’ can help India?

First, nudging people to vote. Those who are invested in their country’s progress are often frustrated by the low turnouts during polls. The turnout is usually low in urban areas, especially the metros. So, how could nudging help in this case? The duo tells us that in the United States, a phone campaign experiment found infrequent and occasional voters to be seven percent more likely to vote than before.

Infrequent voters received phone calls that said nearly everyone in their apartment complex was expected to vote even as they were not and asked how they were planning to spend the day instead. This simple intervention, or nudge, helped push up the voter turnout.

Second, nudging people to not litter. Tagat and Rao recall an Indian innovation in nudging in this case. Walls are often painted with religious imagery to prevent people from urinating on them. The duo also points to a Mumbai-based company’s initiative of providing WiFi garbage bins, which would offer free WiFi in exchange for taking care of rubbish efficiently.

Third, nudging people to pay taxes. Barely three percent of India’s population pay income tax. There are thousands of Kirana shops or local restaurants that don’t provide you bills and, therefore, save taxes on their business income. How can the situation be improved in this case?

Tagat and Rao tell us about a study in the UK where the authors studied the impact of different types of tax reminders on payment of tax for those who had declared their taxable income. They used five ‘norms’ to incentivise tax payments.

Under the minority ‘norm’, people were told that “nine out of ten people in the UK pay their tax on time. You are currently in the very small minority of people who have not paid us yet.” This had the largest impact, pushing up the likelihood of tax payment by nearly 5.1 percent (an increase of £2.36 million in taxes collected in 23 days).

Apart from these cases, nudging can also help prevent the spread of new variants of tuberculosis by getting patients to complete the course of drugs prescribed by hospitals. People can be nudged to drive safely or cross railway crossings more carefully. Students can be nudged to attend classes more regularly. Nudging can help people to pick retirement and savings plans so they don’t suffer in old age. Decongesting traffic is also a possibility if people can be nudged to not break the lane rules, which is perhaps the biggest reason for traffic jams in India.

What are the limitations of a nudge unit?

Mint in its editorial today (13 September) has listed three main limitations to a nudge unit.

First, it points out that behavioural sciences have limited uses. For instance, it can definitely help the government make better policies by introducing simple tweaks, however, when it comes to macro issues, it of little help.

Second, sooner rather than later, we will be forced to ask, “who nudges the nudgers (i.e., the government)?” After all, those who are nudging the common man are also people with their own cognitive biases.

Third, the complexity of India is a major challenge. A nudge may work in one state but not in another. It may improve the policy in one district but can worsen it in the next. It is said in India’s context that “Every two miles the water changes, every four miles the speech.” And if one might add, so do the people and their traditions and biases.

Dr V Anantha Nageswaran makes an interesting point on the limitation of the nudge theory. He says that the more nudging becomes public, the less impact it will have as people will figure out they are being nudged. “Somewhat similar to the problem of how the process of being observed, changes the behaviour of the observed,” he adds.

In light of these challenges, nudging is a challenging exercise. However, we must not miss the forest for the trees. The advantage of adopting behavioural insights to improve policymaking far outweighs any limitations we may foresee at this time.