Ideological Watchdogs of Congress: Goats In Search of a Scapegoat 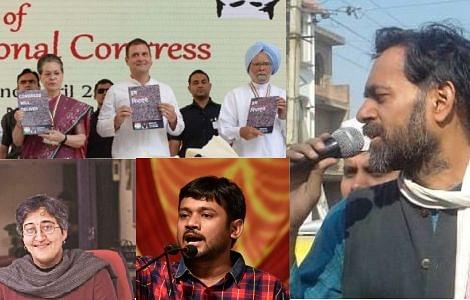 The Congress manifesto and the influential “intellectuals”

The Bharatiya Janata Party (BJP) has managed to secure more seats in its 2019 general elections than in 2014, and breach new geographies. The Indian National Congress (Congress), the other national party has, on the other hand, remained stuck to improve marginally its dismal tally obtained in 2014, with its sphere of influence now confined to the narrow edges of the country. It was a foregone conclusion that the Congress would at best get 100 seats and nothing more. However, the exit polls were unanimous in predicting either a comfortable majority or a landslide for the National Democratic Alliance (NDA), and this led to an almost impulsive articulation of pain and concern by some ideologues committed to restricting the BJP’s mandate (however large) and prevent it from achieving its legitimate political goals.

Leading this pack, before the official counting day but after the exit polls were out, was the psephologist-turned-part-time-hobby-politician, Yogendra Yadav. He started off by remarking on a TV programme that “Congress must die” and later elaborated the same sentiment in an opinion piece in The Indian Express. Professor Suhas Palshikar responded to Yadav’s poorly argued piece with another and much better argued op-ed. In this piece, the Professor essentially provided a reality check for the Indian democracy and counselled Yadav as follows:

The Yogendra Yadavs, Prakash Rajs, Kamal Haasans and Kanhaiya Kumars, despite the goodwill they enjoy, need larger social acceptability beyond their immediate circles in order to be operational. India’s democracy does not easily admit a liberal fringe or a radical liberal extravaganza.

He also advised them to exploit the Congress as a vehicle to further their agendas until the broader society can be readied to accept such fringe elements into the national mainstream.

On counting day numerous opinions like that of Yogendra Yadav’s were expressed on television by political analysts who want to stop the BJP in its tracks. These intellectuals are not formally a part of the Congress but they are a product of the intellectual patronage system seeded and nurtured by the Congress. They have now accepted the larger burden of carrying forward the ideology of the Congress on their own shoulders—with or without that very party.

These intellectual watchdogs of the Congress hold as much responsibility for the rout of the party as their party leader, Rahul Gandhi. It is important that this group is held to account before they go and attach themselves to any other host party. We all remember how this group held sway over the country during the United Progressive Alliance (UPA)-Raj as members of the National Advisory Council (NAC), and that association seems to have introduced a lot of toxins into the body of Congress. Congress’s politics, ideas and manifestos came under heavy influence of this section of people.

Let us look at the following promise from the 2014 manifesto, which delivered the very first drubbing of a lifetime to the Congress:

The Prevention of Communal and Targeted Violence (Access to Justice and Reparations) Bill, 2013, which was drafted and introduced by the Indian National Congress will be passed as a matter of priority.

Even a superficial reading of this act will make it amply clear to anyone how determined these “intellectuals” were to systematically reduce Hindus to almost second-class citizens in India. Although they failed to push this legislation through during UPA-2 they promised to do so in their 2014 manifesto!

Did the 2014 election results have any impact on this promise in the Congress manifesto? Certainly not—the same promise was back in their 2019 manifesto but under a different nomenclature.

We will pass a new law in the first session of the 17th Lok Sabha and in the Rajya Sabha to prevent and punish hate crimes such as mob-engineered stripping, burning and lynching. The law will contain provisions to compensate the victims and to hold accountable the police and district administration for proven negligence.

We all know from experience who would define a “hate crime”—the self-same “intellectuals”—and also how they would define it.

The same group of intellectuals (like Yogendra Yadav), who are openly wishing for the death of the Congress or demanding Rahul Gandhi’s resignation, had pinned a lot of hope on a few radical candidates, across the nation, making it to the Lok Sabha.

Notable among them were Kanhaiya Kumar on a CPI ticket from Begusarai (he lost by more than 4 lakh votes), Prakash Raj as an independent from Bengaluru Central (he lost his deposit), and Atishi Marlena on an AAP ticket from East Delhi (she came third). If one followed the campaign trail or support for these candidates closely on social media, it was amply clear that this same set of “intellectuals” was backing and campaigning for, these radical candidates.

Kanhaiya Kumar, in particular, received open support and endorsements from some academics, TV anchors and Bollywood stars. Of course, we all know that Kanhaiya Kumar rose to prominence for his association with seditious event held on the JNU campus in early 2015. Somehow, magically and for the first time, we see the following promise in the 2019 Congress manifesto:

Omit Section 124A of the Indian Penal Code (that defines the offence of ‘sedition’) that has been misused and, in any event, has become redundant because of subsequent laws;

We can all connect the dots to make an informed guess as to who would have mobilized the Congress to include this promise in their manifesto.

Is it then any wonder that the Congress fared so poorly in the election, given the big gulf created between them and the national mainstream? A big chunk of this responsibility falls on the larger, ideologically-oriented, radical opinion making circles influencing the Congress party.

And that is the reason why these “intellectuals” are actively looking for scapegoats—from Rahul Gandhi to Congress party itself! But it is my considered opinion that they must be held accountable for their share of the damage done to the Congress and to our national politics.