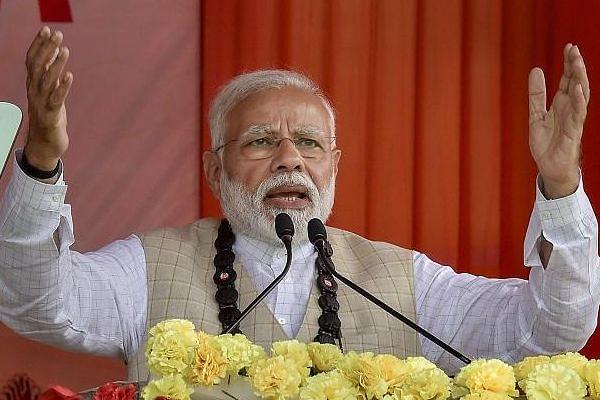 Ajit Singh, 60, shows a message from Prime Minister Narendra Modi on his basic mobile phone. On 5 March, he received Rs 2,000, the first installment under Pradhan Mantri Kisan Samman Nidhi (PM-KISAN). In union budget last month, the government announced it will give annual income support of Rs 6,000 in three tranches to 12 crore farming households with less than five acres.

Singh, a resident of Talao village in Haryana’s Jhajjar district, owns four acres. He believes that the money will likely be used for non-agriculture purposes. “Right now, I don’t need this money as there is a lot of time for harvesting of rabi and sowing of kharif crops. But tomorrow, I have to buy binola (cattle feed),” he says, as he turns his attention back to the card game his friends are engaged in at a baithak. “Farmers will most likely use it to meet household expenses,” one of them pitches in.

In the same village, at another chaupal, Rameshwar Singh and his seven other friends are reading newspapers and engrossed in a political discussion. Rameshwar Singh and his two other brothers have four-and-a-half acres between them. “I didn’t get the money but my brother has got the message about Rs 2,000 getting credited in his account,” he said. “His one son is in Delhi Police. That’s why he didn’t get it,” informs one of his friends, Ranbir Singh. “We filled the forms barely 10 days ago and yesterday they got the money. I am yet to receive but they have. His family is the first one to get any government dole,” he says in jest.

In Kheri, Pradeep Kumar, 55, is smoking hookah along with three others at village sarpanch’s office. He owns four bighas (one acre). “I got the money a week back, within days of filling the form.” Will he use the money for household or agriculture purposes? “No. I think I will take it out during harvesting of wheat crop which is due next month,” he told Swarajya.

Many opposition leaders have criticised the government for only announcing a paltry annual sum of Rs 6,000 under PM-KISAN scheme. Also, the Prime Minister has got a lot of flak from his detractors as they accuse him of trying to win the election using such a populist programme.

Though farmers acknowledge that the amount should be higher to count as a concrete support incentive, they are thankful for merely starting the scheme. “The amount will only increase in future. It’s a good start. No one is going to reduce it, that’s for sure,” says Pradeep Kumar.

“Even if it is for winning election, at least, farmers are getting something. Why didn’t they give? It’s Modi only who is giving it, right? He is not taking anything from us,” says Dileep Singh, in his early 80s who has been a witness to governance of all prime ministers since Independence. “As far as the question about amount being less, no amount will be enough for ungrateful people. Even if you give 1 crore, they will say, it’s nothing,” he adds.

Devender Kumar, 35, another resident of Kheri who owns two kanal (one-fourth of an acre) also received the money directly in his account. “Any support for the poor from the government is a welcome relief. Something is better than nothing,” he says.

In Gudha village, a group of 16 people is sitting in a chaupal, some of them playing cards, a few doing the game’s commentary, and rest talking about politics. “Ask those saying the amount is less, what would they have done if Modi hadn’t given even one paisa? At least he gave something. We are content with that,” says Krishna Kumar, who got the money in his account last week.

“When Devi Lal announced pension for old age people, it was only Rs 100 per month. Now, it is Rs 2,000. A start has been made. Khattar government has also announced an additional support over and above this. If he also gives Rs 6,000, then it will translate to Rs 1,000 per month for a farmer. This is good enough for now. And it will increase,” says Bijender Malhan.

As one of them complains about him not getting the PM-KISAN amount, he is shouted down by others. “He is a former government employee. He doesn’t need it and not eligible either,” they explain.

While domain experts, who are delving deeper into the modalities of the scheme, and evaluating it on the basis of economics and its usefulness to the farmer, politicians, both in the government and in opposition are more concerned about its potential impact on the upcoming general elections.

Swarajya found that at least in Jhajjar district the electoral impact of this scheme is going to be minimal. It wouldn’t be wrong to say that this will be the case for whole of Haryana and other agrarian states with similar income levels. Comparatively poorer states, especially in the eastern part of the country, are a different ballgame.

“Maybe it won’t flip many votes but has helped Modi gain currency with the people. It will surely have an impact,” says Hawa Singh. “Airstrike is the real deal,” he adds referring to the Balakot attack by the Indian Air Force, and then goes on to explain how big an impact this had on even traditionally non-Bharatiya Janata Party (BJP) voters.

“It’s true. Two months back, no one was thinking of voting for the BJP in this region. But PM-KISAN and airstrikes have had a major impact on people’s voting inclination. Even in 2014, this region didn’t vote for Modi. This time it will,” says octogenarian Ram Chander.

Ajit Singh, whom we met in Talao village, said that money should be given on per acre basis. “Ideally, three to four thousand per acre, twice a year, would be more than enough in alleviating farmers’ distress.”

“Khattar-Modi didn’t have much support in the Jat community here. It’s Hooda’s heartland but PM-KISAN, airstrikes and transparency in giving government jobs have earned the Prime Minister and Chief Minister a lot of goodwill and it is slowly transforming into votes,” he adds.

Rajbir Singh, a Dalit, who got a job in Haryana Roadways one year ago is all praise for the government. “I got it without paying even a penny as bribe. In recent Group D selection process, six youth got the job. This is a big issue in villages,” he says.

In Gudha, everyone seconds Kumar’s views, except one former Border Security Force (BSF) personnel. “US media was taken to the site yesterday. They showed the bombs didn’t cause any casualties,” he says. Others shout him down. “Why didn’t they take the media there on the very day of strike?” asks Devender Malhan. “He was a cook in BSF, not a soldier. Don’t take his words seriously. Also, he is a Congressi and the only person among us who is not supporting Modi,” his friend quips.

“These Congressis are questioning how many died. Modi showed boldness to go inside Pakistan and strike. Whether it was 10 or 100, it doesn’t matter. Before this, we wouldn’t even kill one,” says Sujit Malhan. “Can you do one thing? If you can take our one message to these Congressis, just let them know. Agar gaon mein aage na to thaari khaal ne taarenge log (if these people come to villages, they will be skinned alive,” Krishna Kumar requests Swarajya to report this specifically.

The sentiments are similar in all the villages this reporter visited. “What kind of idiots are these? Do they expect the air force pilots to go down and count the number of dead after dropping a bomb? Voters are getting alienated by this kind of nonsense from opposition parties. This is worse than abusing our armed forces. These people are destroying the nation,” Ranbir Singh of Talao village told Swarajya.

“People are fed up of Congress. Log keh rahe hain, dala maaro inke (pelt stones at them). This Rahul wants to know the number of dead. Who will go and count it? What kind of language is this?” says agitated Dileep Singh of Kheri village.

Clearly, Balakot airstrike is having a much higher impact than PM-KISAN scheme on voting preferences of people in this region. Except some hardcore party loyalists, the wave is building up in favour of Modi, again. Fence sitters are hard to spot when election is more than a month away.

Mood is a bit different in villages, where farmers have not yet received the PM-KISAN cash in the bank accounts such as Khajpur and Dawla. While people are cheering Modi for action against Pakistan, they don’t believe that they will receive the money (it’s jumla they say) though they have filled the forms. “We will believe it when we get the money in the bank,” says Balbir Singh of Khajpur village.

“The money is too less. It’s not sufficient at all to meet expenses of even one crop cycle. If we calculate the costs of fertiliser, seeds alone, it will be more than Rs 2,000 for one acre. Add cost of sowing, harvesting, irrigation, labour, etc. Around Rs 4,000 per season per acre would be a decent amount, conservatively speaking,” Singh adds.

“This is for election only. What was Modi doing for last four years? He woke up now. People are smart these days. They won’t fall for such gimmicks. Only after losing the elections in three states, they felt the need to look after farmers. The amount is like oont ke muh mein jeera,” says Satyapal Singh, a farmer, who is yet to get the money.

His brother, an ex-serviceman, is sympathetic to the government. “This is a good beginning. Even if they woke up now, it’s better than not doing anything. What did the earlier governments give? Good steps should be welcomed irrespective of timing,” he says.

Ramniwas of Kheri village summed up the impact of Modi’s governance in the area using a Mahabharat reference in a succinct manner. “Modi is sweeping the election this time. Unless someone has vowed to side with Hastinapur and drown with it if it comes to that, barring such people, most will vote for Modi.”