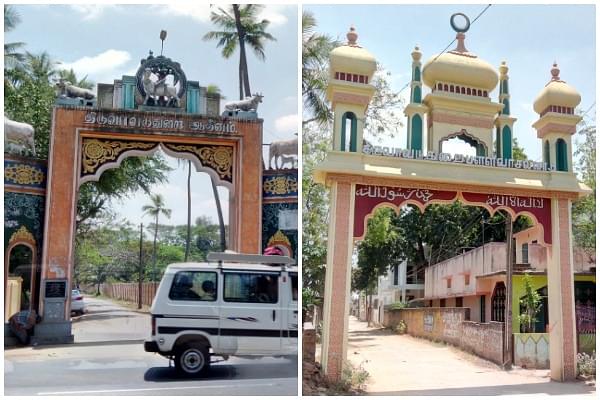 Apparent changes: with the Thiruvavaduthurai Adheenam leasing out plots of land to Muslims, an arch of a mosque (right) has come up at the mutt’s entrance. This has resulted in the Adheenam using the rear for entry and exit where its arch still exists.

The killing of Pattali Makkal Katchi (PMK) worker V Ramalingam near Kumbakonam in Tamil Nadu’s Thanjavur district on 6 February this year is a manifestation of the effects of changing demography in the Mayiladuthurai-Kumbakonam region in the state.

Ramalingam was killed by a group of unidentified people at Thirubhuvanam near Kumbakonam after he opposed efforts by a group to convert Scheduled Castes (SC) in his area to Islam. (The case has since been handed over to the National Investigation Agency.)

The Mayiladuthurai-Kumbakonam belt is famous for the number of temples dotting the area but mosques have begun mushrooming now with Muslims settling in the area in large numbers.

Muslims, in particular, have got properties and lands on lease in these places with some of them acquiring them in front of, or adjacent to, temples. This has led to murmurs in the region, which burst out when Ramalingam was killed.

“The change in demography has been in the works for years but it gathered momentum in the last two decades or so,” says a resident at Mayiladuthurai in Nagapattinam district, where he has been involved in the protection of temples for over a couple of decades. (Mayiladuthurai, or Mayavaram as it was known earlier, is 35 kilometres from Kumbakonam.)

What is happening in Kumbakonam, Mayiladuthurai and Nagapattinam regions, that were part of old Thanjavur in Tamil Nadu before Nagapattinam was carved out as a separate district, is that they have changed with the old and traditional Hindus moving to greener pastures like Chennai and abroad, and with the younger generation becoming tech savvy.

The Thanjavur of yore was famous for its agraharams (Brahmin neighbourhoods) that lined the temples. These agraharams have now given way to palatial buildings and multi-storeyed complexes.

Muslims have been given many of these temple and adheenam lands and properties on lease. “The ushering in of the Dravidian rule saw a local Dravidar Kazhagam leader helping Muslims get lands and properties in this region. Then, the Thiruvavuduthurari Adheenam head Sivaprakasa Desiga Paramacharya Swamigal let out the mutt properties for strengthening its finances,” he says.

“The Dharmapuram Adheenam too has leased out the mutt properties but after we all pointed out at the changing demography, the mutt has stopped this practice for the last couple of years,” the local said.

Muslims were brought to the region to help maintain horses and grow betel leaves. The later generation found greener pastures in the Arabian Gulf and they began repatriating money that helped their families to buy lands and properties on lease .

“Today, the families of those who had brought them here are going through a tough period and these people have even attempted to acquire lands behind temples to construct mosques,” says a priest in Kadalangudi, 25 km from Mayiladuthurai.

Those who have opposed conversion of Hindus, mainly Dalits, to Islam, say that Ramalingam’s video has done what even 1,000 meetings of theirs to highlight the demographic change, couldn’t have done.

“There are plenty of problems faced due to the change in the demography,” says a youth in Mayiladuthurai.

Initially, a Muslim manages to get lease of a house in one of the streets surrounding a temple. This is because the younger ones in the house would have moved to Chennai or Mumbai or abroad for a living. Only their old parents live in these houses and they also tend to move out to cities due to age-related problems. In these circumstances, they give away the lease.

Usually, a Hindu takes over the lease and then hands it over to a Muslim. In some cases, Hindus act as front for a Muslim resident. Since these are leases that have only changed hands, some of them still remain in the name of the original or second lessee.

“Once a person steps into one of the houses, he begins to bring others of his community. For instance, in Therezhundur — where Tamil poet Kambar was born, and who wrote the Ramayana in Tamil — many Muslim houses have sprung up in the main pathway leading to Devaadi Raja Perumal temple. An Arabic college has also come up in that pathway,” says the youth.

In Therezhundur, people faced problems in taking out processions of the temple deities and run the temple car. The Muslim families would cook non-vegetarian food in the open and this affected the temple’s rituals.

“A few years ago, people got together and warned them that if they continue to do such things, they will throw away the food. Since then, the Muslims have been a little cautious. Now, Therezhundur natives are able to celebrate the car festival once a year,” says the youth.

Therezhundur is just one of various such cases. In Needur village, some 10 km from Mayiladuthurai, a Shiva temple — Kailasanathar — inside a tank has been totally damaged. A Perumal (Lord Vishnu) temple was also nearly damaged but a part of it has been reconstructed.

“The temple tank of Kasi Viswanathar temple in Mayiladuthurai was almost lost with Muslims closing it,” says another local, who is working to retrieve temple lands after resigning his job as a computer professional.

Similarly, at Ackoor in Tharangambadi taluk of Nagapattinam district, some 20 km from Mayiladuthurai, an open space in front of the Sri Thanthondri Swamy (Lord Shiva) temple has turned into a weekly fish market in view of Muslims occupying the properties adjacent to the temple. The space belongs to the temple as also the lands and properties on which Muslims live.

The change in the demography in Mayiladuthurai-Kumbakonam belt has to be seen to be believed. Many mosques have mushroomed in the region, coming up on temple lands and properties.

A few mosques are just a stone’s throw away from the temples. It’s something that the Madras High Court has warned against in a recent ruling on a Sunday Bible School coming up near a temple in Kanyakumari.

The Muslims in the region are members of either Thowheed or Sunnah jamaats. Both of these had been keeping a low profile until a few years ago. “Things have changed after the Social Democratic Party of India (SDPI) made its entry in the town,” says the veteran local, who has been involved in the protection of temples.

(SDPI is the political front of the Popular Front of India — a militant organisation, which has been very active and vocal in neighbouring Kerala. Last year, a clamour for banning the front across the nation grew after a student of Maharaja College in Kochi was killed.)

The local business community decided to down shutters in protest against the killing of Ramalingam. But the SDPI and Muslim members of the traders association opposed the closure of shops.

"In particular, the SDPI threatened that they would organise another closure protesting the death of a Dalit at a nearby village. The police had to beat a hasty retreat from taking any action,” said the local veteran, adding that the closure of shops in the town to protest Ramalingam’s killing lasted only a couple of hours.

There have been a couple of cases where the SDPI has tried to whip up fear in the area. In one case, two Muslims boys fell in love with a Hindu girl. One of the boys killed the other and the SDPI try to whip up passions alleging that a Muslim boy had been killed by Hindus.

Police arrested the accused within a few hours and when it was revealed that the victim was killed by a person of his own community, the issue died on its own.

Locals say police cannot enter any Muslim household to arrest any murder or terror suspect. The local jamaat has to be approached to interrogate any suspect. Recently, a Muslim youth from Needur left the country to join terror outfit Islamic State.

The Ramalingam killing could have been dismissed as a result of some sort of rivalry but for the release of the video by one of his relatives. The PMK worker, who had been with the Rashtriya Swayamsewak Sangh too at one point of time, was attacked around 8 pm at Thirumangalakudi, 20 km from Mayiladuthurai. He was first rushed to Kumbakonam government hospital and then referred to Thanjavur government hospital but he succumbed to his injuries on his way.

Since Ramalingam was killed for opposing conversion of Hindus to Islam, the relative released the video through WhatsApp. “Thanks to the relative’s presence of mind, the world could know the real reason for Ramalingam’s murder,” says the veteran.

Locals point to one of the accused’s confessions that Ramalingam was killed to drive fear in the minds of other communities and they say that this is a proof of how things have worsened in the region.

Many from the Hindu community are now waking up to the change in the demography and the realities. They have begun to voice concern over temple lands and properties being given away to mosques and Muslim rehabilitation. Resistance to the taking over of temple lands and properties has protected a small Ganesh temple at Ksingan village, 25 km from Mayiladuthurai, from being swallowed by a mosque that has come right behind it.

Another local, P Narayanan, says there is a temporary lull in the activities now of taking over of temple lands and properties after the Narendra Modi government cracked down on foreign funds flowing into the country through stricter implementation of the Foreign Contribution (Regulation) Act, 2010.

“The fall in crude oil prices and the resultant problems in the Gulf countries have also contributed to the slowdown,” says Narayanan.

Locals, however, fear that it is a situation that can aggravate anytime, particularly if Muslims find political patronage.