'India: The Modi Question' S01 E01 Is Lazy, Malicious And Maybe Even Racist, All At The Same Time 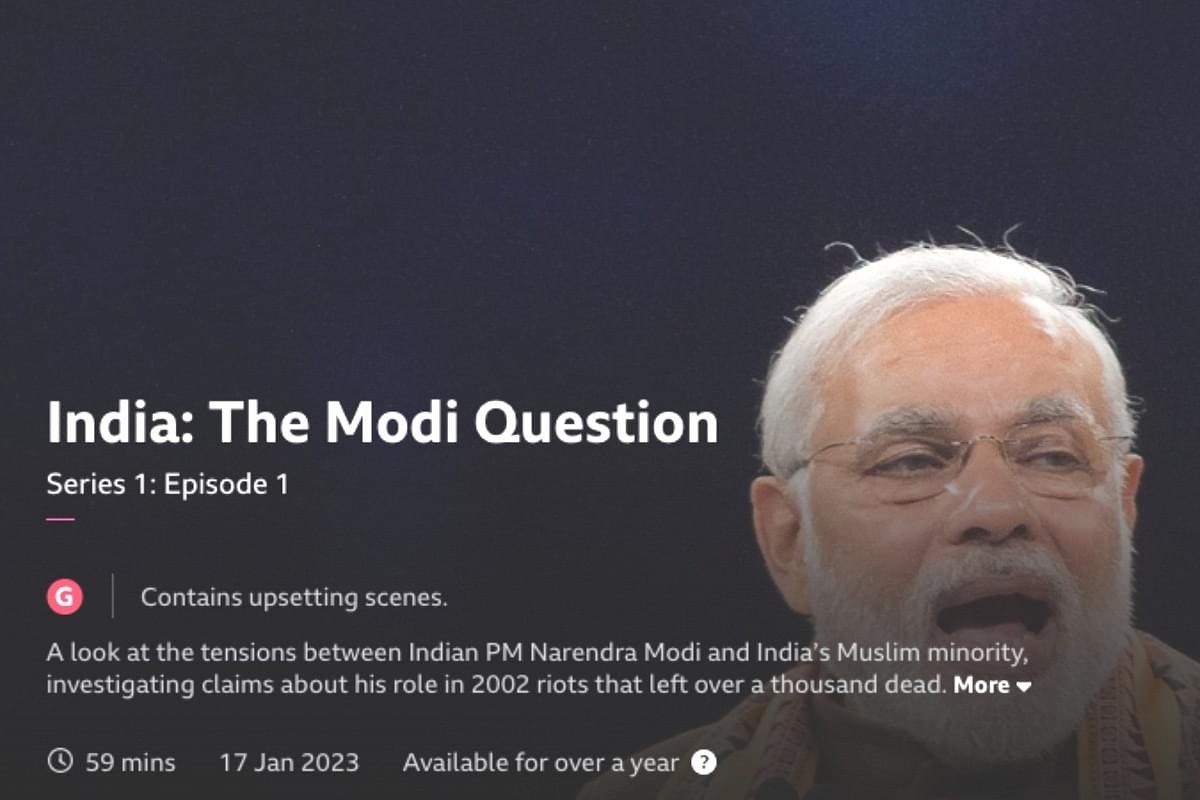 The BBC's 'India: The Modi Question'

This 'establishment' in the West knows that there won't be any. They could have looked for minor incidents which could then be played up as 'state sponsored violence against minorities', but even they were not coming . They tried the 'Lynchistan propaganda' but it did not work.

So now we have, India: The Modi Question, being released by the BBC. A documentary series whose first episode can be described as lazy, malicious, and blindly partisan, all at the same time.

Here's what the BBC says in its description for this episode:

"Narendra Modi is the leader of the world’s largest democracy, a man who has been elected twice as India’s prime minister and is widely seen as the most powerful politician of his generation. Seen by the west as an important bulwark against Chinese domination of Asia, he has been courted as a key ally by both the US and the UK.

Yet Narendra Modi’s premiership has been dogged by persistent allegations about the attitude of his government towards India’s Muslim population. This series investigates the truth behind these allegations and examines Modi’s backstory to explore other questions about his politics when it comes to India’s largest religious minority.

This episode tracks Narendra Modi’s first steps into politics, including his association with the right-wing Hindu organisation Rashtriya Swayamsevak Sangh, his rise through the ranks of the Bharatiya Janata Party, and his appointment as chief minister of the state of Gujarat, where his response to a series of riots in 2002 remains a source of controversy."

As multiple threads on social media have already pointed out, the one episode released so far either ignores or casually dismisses what the Indian judiciary itself said on not only the then CM Modi's response to the riots but also on the character and conduct of those charging him with the blame for them (Setalvad, Sreekumar etc).

The episode, through its running time of about an hour, regurgitates the same charges and motifs which have been disproven and discredited multiple times in the last two decades.

So if this new documentary repeats more of the 'same old', and if the 'same old' has already been debunked, why did the BBC come out the series in the first place?

There are two types of racists in the West - the right-wing racists whom you can easily identify. They are explicit and usually not very bright. The dull-headed Bible-thumping racists who believe in their racial superiority are not only easy to identify but also easy to refute and you know to keep your distance from them.

Then there are the left-wing racists.

They hide well their racism with arguments of their 'civilising missions'. 'Your society is corrupt. It is morally inferior. It is filled with inequalities and without us you would kill each other descend into hell'.

Throughout the history of the West, the racists in a quite and steady manner have crossed the line from right-wing to left-wing. So right-wing anti-Semitism becomes a fashionable, pro-Palestine movement.

Left-wing racism is also monopolistic fundamentalism. While the Christian West may compete and even fight with the Islamic world and Communism, between what it perceives as an idolatrous Pagan civilisation and Islamist politics, it will prefer to stand with the latter. Between an Eurocentric Marxism and Hinduism it will stand with the former.

PM Modi rightly spoke of reaching out to Muslims as equal citizens of Bharat without caring about their return in votes. That is a bold statement. It is an approach in the interest of nation-building.

But think about it—if it succeeds.

Then India would have shown the world how Muslims and Hindus can live together with mutual respect without theological poaching.

So far, the only 'achievement' of Nehruvian secularism has been that it has prepared the ground for the wreckage of Hinduism and the 'final victory' of evangelism and Jihadism.

In such a context, if PM Modi reaches out to Muslims, while ensuring the building of an India that is socially healthy, culturally proud and spiritually knowledgeable, then that would be akin to ushering in a new dawn for Hindu and Indian society.

The Left-wing racist wouldn't like it. Because Modi would be enabling the Hindus to achieve something he (the Leftist) doesn't think they deserve. That is their problem with Modi.

Is that the BBC's problem too?