Intolerance Debate From The Street Level 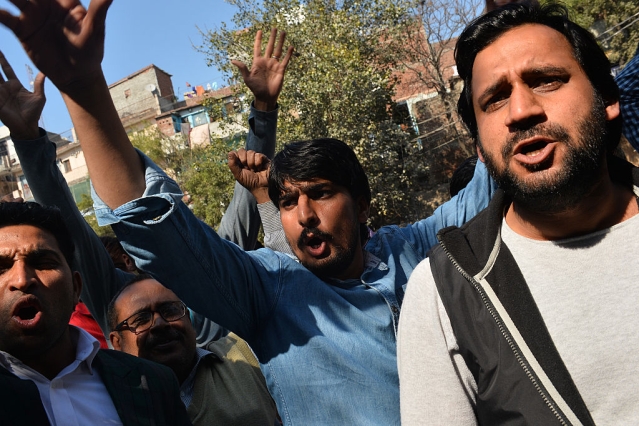 Travelling through India in December 2015, I wanted to experience for myself the great ‘intolerance’ debate from the point of view of ordinary working class Indians whose native concept of India is ignored by the intellectual ‘chattering classes’ . I wanted to put to test the left-liberal intelligentsia’s claim that India is turning intolerant and fascist under the BJP government.

I walked the streets and spoke to people struggling to make an honest living through hard work much like their parents and their grandparents before them. I asked them questions about Nazism, Hitler and fascism. None of them had even heard of these terms, let alone be alarmed or scared. They looked rather bemused and wondered what relevance these words have in their lives. Must they know them at all? Here is a link to these street interviews.

Professor Jakob De Roover of the University of Ghent once mentioned to me that Europe, the label of fascist or Nazi is never applied lightly. These words have very big and serious implications and cannot be used lightly in any sort of private, public or political discourse. In these trying times of refugee influx, violence and the resultant challenges it poses to the local European communities, there are varied viewpoints on the means to adopt and tackle the refugee crisis.

Many groups are opposed to refugees being allowed into Europe and many want them to be deported. While there are some asking for more open borders, the debate rages on. But I have not for a moment heard any left-oriented person, scholar or politician accuse the right parties or politicians to be fascist or Nazi.

Marine Le Pen, leader of the French National Front, is a strident right-winger calling for a ban on all immigration and refugee intake. Her vision of France is of a closed border and extreme chauvinism. She has not, for a moment, been called ‘Hitleresque’ or fascist by even the most leftist newspaper Le Monde. The UK’s conservative Tories have taken steps to curb immigration. They have stopped issuing ‘permanent residence’ or citizenship statuses to immigrants (besides creating other entry barriers while easing involuntary exit for immigrants). In other words, immigrants can be easily deported. They have stopped all immigrant entry from Europe. This has led to a massive immigrant colony in Calais, France.

The British Prime Minister David Cameron has often spoken of a Britain founded on Christianity and Christian principles. Besides the Tories, there are varied far right and conservative parties in England which include Nigel Farage’s UK Independence Party (UKIP). Never has any segment of the British or European media labelled them Nazi or fascist.

In the Netherlands, the rise of Geert Wilders as a voice against radical Islam and the spread of Islam in Europe has raised many hackles but none so extreme that he would be called a Nazi or fascist. In fact, Geert Wilders sees himself as a liberal who speaks his mind on forces that are trying to change his country, on his ideas to preserve the culture and way of life of his forefathers without curbing the freedom of others.

So why is it that without a thought, the Indian left intelligentsia uses the word so freely to brand right-wing politicians in India as Naziesque, Hitleresque even though people in India don’t relate to these terms and have no conception of what these terms mean (as my street interviews have demonstrated)?

If someone says “well five interviews don’t count for anything…”, to them I suggest they can repeat these questions in their part of the country to rickshaw pullers, cycle puncture wallahs, tailors, vegetable vendors and the kirana store owners. The result, I can guarantee, will be the same. My point is that these are the people who vote and elect governments, they are the ones who keep democracy alive.

In my understanding, the left-liberals continue down this irrelevant narrative due to various reasons, among them intellectual bankruptcy and stagnation. Most of their ideas are born from the anti-monarchy sentiments of the late 19th and early 20th century Europe. They have no political or cultural relevance in India. Do note that for this very reason the left’s sentiments do not find many takers in free enterprises. In the United States, the little influence they had was uprooted by J. Edgar Hoover, the founder of the FBI.

Showboating to remain relevant to leftist westerners, sullying the image of India and its culture, casting aspersions on the right-wing are the reason d’etre of the Indian left. Some samples of the left narrative: rape in the West is a law and order problem but in India it’s a cultural problem. Women have to be liberated in India [my question: liberated from what, do they see themselves in chains?]. Homosexuals and transgenders do not have equal rights [my point: culturally Indians have not had problem with their existence or rights]. And if all else fails there is the perennial caste system.

With the rise of India as an economic superpower, the left in India has lost massive ground and continues to do so. Indians by nature are are an enterprising lot, not ones to wait for ‘deliverance’. Seventy percent of India’s employable population is self-employed (rickshaw pullers, tailor, vegetable vendor, kabadiwallah, cobbler, etc. are all self employed). No one is waiting for jobs to be created. Such self-belief is detrimental to the left’s causes - they prefer a helpless populace wronged by the high and mighty rulers.

Thus, the left is trying to shore up waning relevance amongst the youngsters through smoke-and-mirror tricks of intolerance, freedom of speech, plight of the underprivileged, etc., borrowed from the western leftist paradigm.

The Western Leftists themselves had abandoned such futile tricks decades ago, instead engaging in far more constructive nation-building dialogues with their Right counterparts. An epitaph on the Indian Left’s tombstone will soon read:

“Here lies irrelevance dealt a death blow by the sheer brilliance of the Indian nation!”