Is Kanhaiya Kumar Planning To Leave The CPI? The Answer Is A Guarded ‘Yes’! 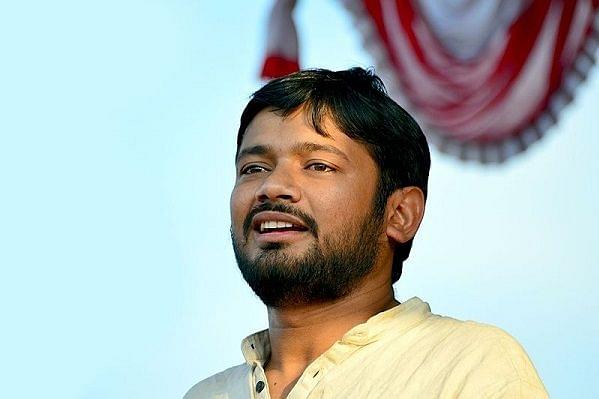 Former Jawaharlal Nehru University (JNU) student Kanhaiya Kumar, who shot to national infamy for allegedly raising seditious slogans at the varsity campus in early 2016, may be looking to junk his communist identity.

Kanhaiya Kumar, a firebrand orator who was fielded by the Communist Party of India (CPI) to contest the 2019 Lok Sabha polls from Begusarai in Bihar, triggered speculation by meeting JD(U) leader Ashok Chaudhury at the latter’s residence on Monday.

Though the JD(U) said that the CPI leader met Chaudhury to “discuss issues related to Bihar”, there were not many takers for that explanation.

Because Kanhaiya Kumar’s latest actions, and inactions, indicate that he is slowly dissociating himself from the CPI.

Kanhaiya Kumar has always had a cordial relationship with chief minister Nitish Kumar. When Kanhaiya was arrested in February 2016 for allegedly raising anti-national slogans on the JNU campus, Nitish Kumar strongly criticised the arrest.

While Nitish Kumar’s JD(U) was at that time part of the Mahagathbandhan that included the RJD and the Congress, Kanhaiya maintained cordial ties with Nitish Kumar even after the latter returned to the NDA in 2017.

The two have carefully avoided criticising each other even during high-stakes election campaigns. While campaigning at Begusarai in 2019, Kanhaiya Kumar trained his guns exclusively in the BJP and even praised Nitish Kumar.

In fact, say senior leaders of the JD(U), it was during that election campaign that differences between Kanhaiya Kumar and his party (CPI) leadership started developing.

Kanhaiya Kumar, who had gained celebrity status after his arrest in the JNU sedition case, had collected a huge sum of money through crowd-funding for his election campaign.

A large number of left-inclined ‘celebrities’ endorsed his election campaign against BJP heavyweight Giriraj Singh (who inflicted a crushing defeat on Kanhaiya), and the strong left ecosystem helped him raise a huge sum of money.

The CPI wanted Kumar to provide an account of the funds he had raised and deposit a substantial portion of it in the party’s coffers. Kanhaiya Kumar flatly refused to do so on the grounds that his well-wishers and supporters had donated money only for his own election campaign and not to the CPI.

Kumar felt slighted when the CPI leadership reprimanded him for alleged violation of the model code of conduct (during the poll campaign) for which he (Kumar) was booked by the Election Commission.

The differences between Kumar and his party leadership became more acute with the CPI becoming part of the RJD-led Mahagathbandhan.

Kanhaiya felt that the main reason for his humiliating defeat by over 4.2 lakh votes was the RJD fielding a strong candidate (Tanveer Hasan, who had finished as runner-up in the 2014 Lok Sabha polls).

RJD leaders, including Tejashwi Yadav, had campaigned aggressively for Hasan at Begusarai. Kanhaiya Kumar could never get over his ignominious debut electoral performance for which he partially blamed the RJD.

Thus, when the CPI allied with the RJD, it rankled Kanhaiya Kumar. The latter had repeatedly urged his party leadership against joining hands with the RJD.

“He (Kanhaiya Kumar) felt that the alliance with the RJD, which is associated with scams and goonda raj, will harm the CPI’s image nationally. Kumar also had very testy ties with (Lalu Yadav’s son and anointed heir) Tejashwi Yadav who felt threatened by Kumar’s greater popularity and profile on the national political stage and also his (Kumar’s) far superior oratorical skills,” senior JD(U) leader Ashwini Singh who hails from Begusarai told Swarajya over phone from Patna.

“Kanhaiya Kumar has a very low opinion of Tejashwi Yadav and has always bristled at acknowledging Yadav as the leader of the Mahagathbandhan of which his party (CPI) was a constituent,” said a close aide of Kumar who did not want to be named.

Earlier in 2018, Kumar had labelled the CPI as the ‘Confused Party of India’ because of its insistence on aligning itself with the Congress. Kumar has been a votary of the CPI charting an independent path and strengthening itself instead of aligning with other non-communist parties.

Kanhaiya Kumar was censured by the CPI national council that met in Hyderabad in end-January this year for his alleged involvement in violence at the party office in Patna last December.

The office secretary of the state CPI headquarters at Patna was roughed up by Kumar’s supporters who were angry over some organisational matters. Kumar did not attend that meeting citing ill health.

A close associate of Kumar told Swarajya that the former JNU students’ union chief is disillusioned with his party and is distancing himself from it.

JD(U) spokesperson Ajay Alok added to the speculation about Kanhaiya Kumar moving close to the JD(U) by saying that the CPI leader would be welcome into the party. Alok, however, added a caveat: that Kumar would be welcome “only if he gives up his vikrit (perverted) ideology”.

Kanhaiya Kumar himself kept silent on all the speculation and rumours of his joining the JD(U). His silence, say political observers, also speaks volumes about his intentions.

Kanhaiya Kumar’s associates, however, say that he is not likely to join the JD(U) right now. As long as the JD(U) is aligned with the BJP, Kanhaiya Kumar will not join Nitish Kumar’s party, they assert.

The CPI leader, they add, is only keeping all his options open now. But that will not go down well with the dyed-in-the-wool and dogmatic ideologues in the CPI who are very unhappy with him.

It, thus, seems only a matter of time before Kanhaiya Kumar leaves the CPI and begins a new innings in politics.