Is Siddaramaiah Preparing For A Hard Bargain In 2019, Or Is He Just Cranky? 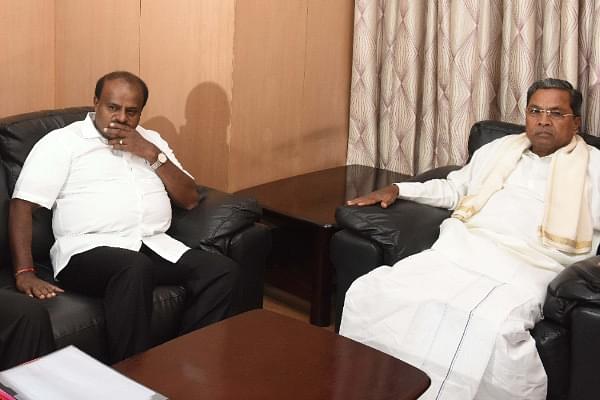 It is believed that Siddaramaiah is being used as a weapon by the Congress high command to keep H D Kumaraswamy in check. (Arijit Sen/Hindustan Times via Getty Images)

Siddaramaiah, the former chief minister of Karnataka, dropped a bombshell, so to speak, created a flutter, and left with his family to Europe on a holiday. The man who led the state for five years is still bitter that the Congress formed the government with the Janata Dal (Secular), which he was part of once upon a time.

In the last week of August, Siddaramaiah had said that if the people’s blessings were with him, he would have another stint as chief minister. He, however, refrained from indicating when that would happen. He also went on to add that his political opponents had united against him to ensure that he did not become the chief minister. There is a kaal chakra (wheel of time) and those who are on top will have to come down and those below will go up, he said, while fuelling speculation of a possible coup.

The issue refused to die down as an ardent Siddaramaiah supporter and Agriculture Minister of Karnataka, Shivsankar Reddy, said Siddaramaiah could become the chief minister if the coalition partners agreed. Another leader, Cheluvarayaswamy, too towed the same line and said no one could isolate Siddaramaiah.

Siddaramaiah has been sulking ever since the coalition government was formed. He, in fact, is fighting a battle both within the Congress as well as with the JD(S). Many old-timers in the Karnataka Congress view him as a newcomer who got the coveted post of chief minister very early. In fact, when he became the chief minister in 2013, he had left several leaders like Mallikarjun Kharge and Dr G Parameshwara upset as they felt beaten in the race.

The Gowda family, which runs the JD(S), too, has an axe to grind against him. Deve Gowda feels betrayed that Siddaramaiah, the man he mentored, had left the party. He also views him as a threat to his son, Kumaraswamy, and would go that extra mile to sideline him. Siddaramaiah had claimed both in 2013 and 2018 that the election he was fighting would be his last. He had said he would take political retirement in 2018, but till date continues to be one of the most active politicians in the state.

This is not the first time that Siddaramaiah has created a flutter since the Congress-JD(S) government was formed. He heads the coordination committee of the two parties and had opposed a full budget and the farm loan waiver. He was, however, overpowered by his high command, which asked him to fall in line.

Observers say Siddaramaiah is fighting a battle on many fronts. First, for his own relevance. Second, he wants to ensure that his men are well rewarded in the Cabinet expansion slated for the third week of September. As part of the latest agreement, both the Congress and the JD(S) would get to induct seven members each into the ministry and the two parties would also nominate chairmen to the 90 boards and corporations on a 2:1 seat sharing agreement.

If one looks at the timing of Siddaramaiah’s bombshells, they are always thrown up around a Cabinet expansion, an election, or when he feels threatened that some of his schemes would be discontinued by the current government.

However, the real issue is…

The 2019 Lok Sabha election would be nothing short of a mad race, not just in Karnataka, but across the country. The opposition is burning the midnight oil to cobble up an alliance to ensure Narendra Modi does not return to office. It is a well-known fact that the Bharatiya Janata Party (BJP)’s southern march would be led from Karnataka and that the party would look to win big in the state. While on the one hand, the JD(S)-Congress are doing everything they can to stop the BJP march, there is also the major issue of one-upmanship between the two United Progressive Alliance partners.

There are 28 Lok Sabha seats in Karnataka and the BJP would contest all of them. It would look to better its tally from the 17 that it won in 2014. At the time, the Congress won nine while the JD(S) won two. The JD(S), which is eying a third-front resurgence, wants to remain relevant in national politics. It would hope to win at least seven to nine seats in 2019.

The Congress, on the other hand, wants to lead a united opposition and, for this to happen, it would need to win a good number of seats. In this context, the battle in Karnataka becomes crucial. Hence, it all boils down to seat-sharing with the JD(S) as the two parties have decided to contest the polls together. They realise that the only way to keep the BJP at bay is to stick together.

While there are these compulsions, both parties still have not had any conclusive arrangements on who gets how many seats in 2019. Siddaramaiah’s statements in the recent past all point towards destabilising the coalition. The JD(S), on the other hand, which got the chief minister’s post despite coming third in the Karnataka state election, wants to ensure that this government survives till at least 2019.

The Congress would like to give away just 10 of the 28 seats to the JD(S). However, the JD(S) would be keen on contesting at least 14, that is, half the total number. For the Congress to win the hard bargain and ensure that the JD(S) gets fewer seats, the likes of Siddaramaiah and his statements become important. There is even talk that Siddaramaiah has been authorised by the high command to issue such statements.

What the JD(S) will cling to

Siddaramaiah’s clout has eroded the most in his home constituency. First was the shock defeat in Chamundeshwari in the Karnataka Assembly election, and now the dismal performance in the local body polls.

In Mysuru, which is his home turf, he failed to steer the Congress to a majority in the city corporation. The BJP, which is considered weak in this belt, emerged as the single-largest party by winning 22 of the 65 seats. The Congress ended up with 19 and the JD(S) with 18. The Bahujan Samaj Party won one seat while the independents bagged five.

Siddaramaiah did try hard to send a message that he would be able to win big without the support of the JD(S). However, he did not fail only in Mysuru but also in Chamaraja and Krishnaraja. In Chamaraja, the Congress won just one seat, and in Krishnaraja, it was the BJP which emerged the winner with 11 of the 20 seats. The only consolation was at Narasimharaja, where the Congress won 13 of the 23 seats.

Now, this defeat will play out in 2019. While the Congress would try and bargain hard through statements, the JD(S) would cling on to these numbers. The local body polls clearly showed that the Congress was not able to win big without the JD(S). This has now given the JD(S) enough ammunition to bargain tough in 2019. This would ideally mean that the JD(S) would demand a lion’s share at least in the Old Mysuru region, where the Congress is also strong.

The days ahead will be interesting, and there is no doubt that the banter will continue. Will the Congress bulldoze the JD(S) when it comes to seat-sharing or vice versa? The fact, however, is that the two parties need to stick together if they have to challenge the BJP in Karnataka.