Is The Most Right-Wing State Government In Indian History About To Be Voted Out? 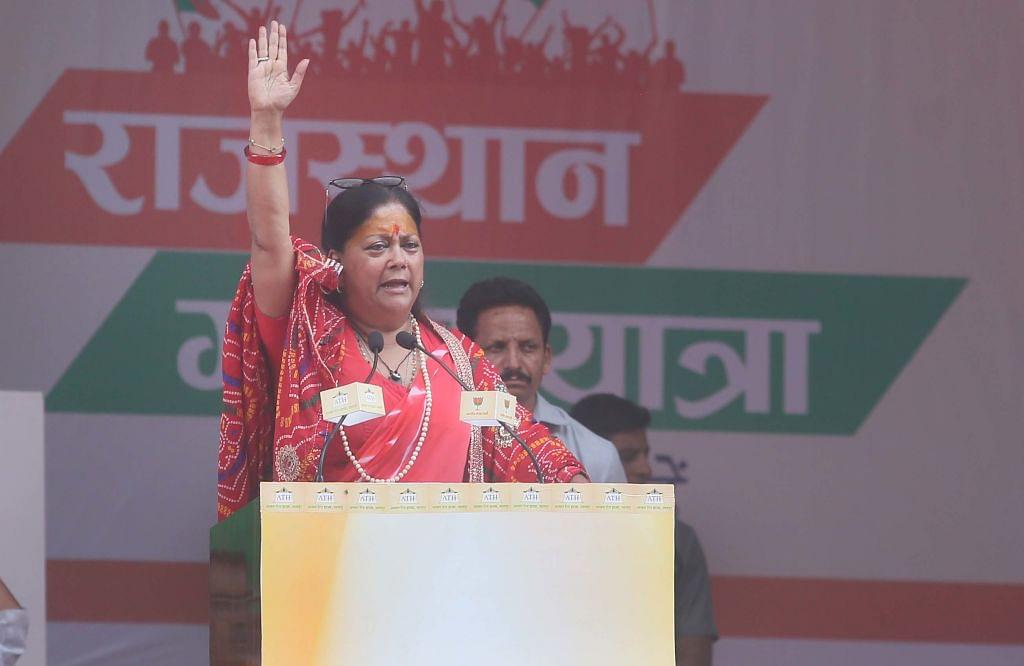 The Vasundhara Raje-led Bharatiya Janata Party (BJP) government has been as classically right of centre as Indian politics permits. The economically conservative positions, which the Raje government has taken, are neither common nor likely to be matched by most chief ministers across states and parties.

Yet, the economic policy has perhaps been the least talked about campaign item in the run up to the voting in Rajasthan. By itself, it is not a surprise – Indian elections are an emotive affair. Where politicians talk about policy, they talk about it in terms of outcomes and not inputs. But given the extent of changes made by Raje government, it is almost tragic that her work found so little mention through the campaign messaging.

Through 2013, the Raje government worked on two types of governance initiatives – supply side reforms and capacity building.

On the supply side reforms, the most visible effort made by the Raje government has been on labour reforms. Her government set the pace and the tone for states to bring changes to labour laws, an area where the Narendra Modi government could not make a breakthrough despite several attempts. Rajasthan passed laws to change three key labour laws – the Industrial Disputes Act, 1947, the Contract Labour Act, 1970, and the Factories Act, 1947. The state also modified the Apprenticeship Act before the central government made nationwide changes.

These amendments made it easier for industrial units operating in Rajasthan to shut down and fire up to 300 workers without any prior government permissions. These changes were made to help the small businesses absorb more workers on direct payroll before the fear of consequences of future retrenchment. The state also mandated a 30 per cent limit for workers to unionise, instead of the earlier 15 per cent threshold. These changes came into force in November 2014 after the President of India approved them.

The Rajasthan Special Economic Zone bill made it easier to acquire agricultural land in the state. Although Rajasthan isn’t very urban, a forward-looking Apartment Ownership Bill made the property transactions more transparent, before the central Real Estate (Regulation and Development) Act was passed. The state also made provisions for easier land acquisition specifically for renewable energy projects – an area where Rajasthan will conceivably see high growth in years to come, as it is endowed with enough sunshine and large tracts of barren land. The micro, small and medium enterprises (MSMEs) get land allocation permissions in seven days, and the state has worked towards creating an own land bank for easier allocations.

Agriculture reforms taken up by the Raje government were also pioneering. Her government enabled creation of a single agriculture market, rationalising the licensing procedures across the mandis in the state. The market fee and taxation structures were also rationalised to make it easier for farmers selling horticulture commodities. Rajasthan also allowed bulk buying of farm produce for captive use of buyers.

Perhaps the most important classical conservative reform was to provide a statutory backing to land records in the state. Rajasthan perhaps has one of the strongest land ownership and private property, with the titling laws favouring small and marginal land owners. The state also allowed land pooling before transactions, again favouring small land owners who would otherwise get muscled out in such land deals.

This recognition of private property rights was extended by liberalising the transport and trade of forest produce for the tribal communities living in forested as well as barren interiors.

Raje experimented with private participation in the public distribution system (PDS). The Future Group was roped in to run the fair price shops branded Annapurna Bhandar, also bringing in an assortment of own merchandise to sell at lower rates in addition to the PDS goods. The idea was to make the business profitable and reduce the pilferage and hoarding, which fair price shop owners resorted to. This brave experiment did not fully last its course, but this model is perhaps the best PDS model for the country to adopt.

In this term, Vasundhara Raje made good progress in solving a key irritant for Rajasthan – the health of its power distribution companies (DISCOMs). Saddled with debt and mounting losses, the Rajasthan government transferred part of the DISCOM debt on its books through Modi government’s Ujwal Discom Assurance Yojana (UDAY). The government then brought the private sector firm CESC to manage power distribution in cities like Kota and Bharatpur, thus trying to attack the root cause of the problem – the state DISCOM inefficiency.

The Raje government passed a bill to repeal 61 state acts and 187 underlying state acts, which were not relevant to governance. The Rajasthan Vexatious Litigation (Prevention) Bill, 2015, allowed the litigating parties or the advocate general to intervene and get potentially frivolous cases quashed. This was a good step in reducing the judicial pendency in the state.

Raje revived her Bhamashah Yojana, introduced during her first term, but later shut down by the Ashok Gehlot government. Bhamashah Yojana, a card-based government programme, delivers affordable healthcare and PDS benefits among other things, to economically backward sections of the society. The healthcare benefits are delivered through a private public partnership model, precursor to the central Ayushman Bharat programme.

Named after a trusted general of Rana Pratap, Bhamashah Yojana was re-purposed in this term by Raje to focus on financial inclusion and other government benefits as well. The biggest feature of this card was to keep women in the household as key beneficiaries. This programme has been so popular that Ashok Gehlot, frontrunner to be the chief minister if Congress wins the election, expressly clarified that this time he won’t ban the ‘good things done by the Vasundhara government’.

The Mukhyamantri Jal Swavlamban Yojana was launched as a flagship and all-encompassing water conservation programme across the state. Promoting micro-irrigation and focusing on water table improvement in a generally rain parched state, Raje attempted to institutionalise water conservation measures at big scale but low investment.

Raje also brought small but visible reforms in the education sector, again seeking private participation to improve the schooling density and access. In traditionally-conservative areas like Shekhawati, government or government-aided school enrollments have increased significantly over the last couple of years, reflecting the improvement in service delivery.

The Barmer Refinery and Petrochemical Complex project was revived after tough negotiations with the central government and the central oil public sector units. Prime Minister Modi flagged off the construction of the long-delayed refinery in January 2018, which will entail an investment of over $6 billion.

The capacity building in Rajasthan fully leveraged the central government programmes. The state got almost 8 million toilets as part of the Swachh Bharat Abhiyan. More than 950 new Industrial Training Institutes (ITIs) were opened – Rajasthan has a big population of artisans and self-employed workers, who can expressly benefit from ITI training. More than 8,000 kilometre of national highways were added in the state, more than doubling the existing 7,000 kilometre network in just five years. Rajasthan saw the highest enrollment of more than 1.4 million in the social security programme Jeevan Jyoti Beema Yojana. More than 25 million new bank accounts were opened under the Jan Dhan Yojana, and linkages created under the Bhamashah Yojana for direct transfer of benefits. The Pradhan Mantri Awas Yojana, electrification drive as well as the Ujjwala Yojana had strong Rajasthan footprint.

This economic infrastructure has also been suitably topped by the Raje government by usual doze of populism. There are cheap food outlets in almost 200 urban centres. There are programmes to financially aid expecting and new mothers, with special focus on supporting girl child. There are easy loans for specific sections of the society.

Despite this long list of impressive, relevant, and tangible government interventions, the fate of the Vasundhara Raje government hangs in balance.

The election campaign, dominated by discussions on caste, anti-incumbency, rebel candidates, and perception battles ends on the evening of 5 December. Perhaps it will need more chief ministers like Raje over many more years to move the needle on issues which influence elections.

Meanwhile, the result notwithstanding, Vasundhara Raje can look back on this term with the satisfaction of having run an ideology-driven government.