It’s BJP All Over The Place In MP 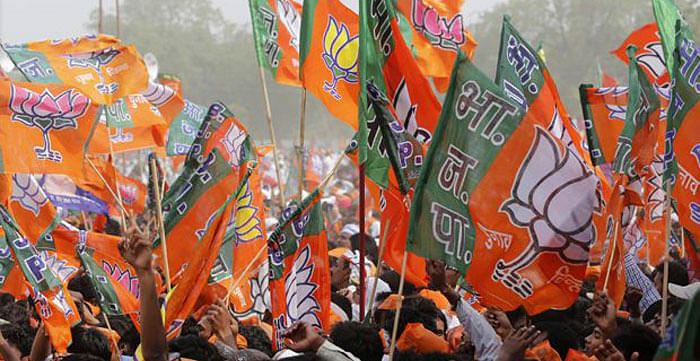 The disoriented state unit of the Congress cannot overcome infighting. And NCR-based media does not have the foggiest clue about the states.

RSS swayamsevaks have won the civic polls in Madhya Pradesh for the BJP. “A municipal election is fought on the issue of delivery by the government and the efficacy of networking by the karyakartas,” a member of the party’s national executive told this correspondent. “It should not be difficult for a good candidate to cover 5,000-odd people in his ward,” added the member.

A member of the AAP from the state, Prahlad Pandey — not on good terms with his party’s leaders for a while — has a different take. “BJP won because there is no opposition in Madhya Pradesh,” he opined.

Both agreed in different ways that the so-called Vyapam scandal has had no bearing on the local electorate. While the BJP leader said that it has always been a weapon in the hands of the Congress to attack the central leadership to create an impression that the NDA regime is no less corrupt than the UPA, the AAP representative told Swarajya that the issue was not even raised by the Congress during the campaign.

“Some of us do not even know who our (local) leader is,” a defeated candidate of the Congress said under the condition of anonymity. This is reminiscent of the scene in the BJP camp witnessed in Delhi during the election for the Krishna Nagar constituency, where the polling agents were unsure of their calling. And traditional supporters were not sure whether to back Kiran Bedi or sulk because Dr Harsh Vardhan had been ‘demoted’ from the Health Ministry and not even made a face of the Assembly election.

Since the time the Digvijaya Singh government lost to the BJP more than a decade ago, and more so after Shivraj Singh Chouhan took over the reins from Uma Bharti, the story of the Madhya Pradesh unit of the Congress has been one of ego battles between state-based chieftains. In Gujarat, after Narendra Modi had taken over from Keshubhai Patel, Amit Shah destroyed the support system of the Congress by poaching into its panchayat strongholds.

In Madhya Pradesh, when Digvijaya Singh’s era of entitlements ended — the writ of a ‘royal’ Jyotiraditya Scindia does not run beyond his fief in and around the Guna Lok Sabha constituency — RSS shakhas spread everywhere, catching the fancy of, in particular, the semi-urban electorate.

Both the central and state leaderships of the winning party credit the victory in 8 out of 10 municipalities of Madhya Pradesh as people’s appreciation of good governance, right wing ideology and the Congress’s cynical propaganda at the Centre, but let that be the BJP’s view. The Congress hid its frustration by saying, “The utter misuse of administrative machinery led to BJP’s victory in the civic polls.”  Let’s not take that seriously either.

The most pronounced factor in these polls was TINA: There Is No Alternative.

Morena, Ujjain, Harda and Chakghat in Rewa, Bhainsdehi in Betul, Kotar in Satna, Suwasara in Mandsaur, and Vidisha went to the BJP kitty. The Congress could not manage even both of the remaining two centres. While Sarangpur in Rajgarh went to it, an independent candidate grabbed Guhwara in Chhattarpur.

The Congress cannot brush this aside calling it a highly localised event. The BJP had won municipalities across the state in the elections held early this year already. Elections to the 10 that went to polls recently were pending for a variety of reasons.

Since we are in the profession of journalism, we wouldn’t ask the Congress to start an exercise of introspection. We’d rather direct that advice to our peers. By relying on NCR-based and Lutyens’ Delhi-fed ‘news’, our compatriots are losing the plot on ground. And this view is not necessarily pro-BJP. Those who abuse Mamata Banerjee and J Jayalalithaa, sitting in their armchairs in Delhi, do not understand West Bengal and Tamil Nadu either.