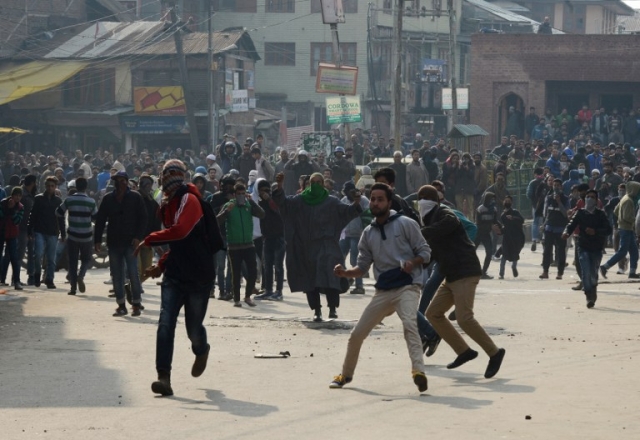 National Conference president and former Jammu and Kashmir Chief Minister Farooq Abdullah on 15 March pitched for pre-1953 politico-constitutional position for the state. “Our struggle is for the restoration of autonomy of the state, pre-1953 position, and Article 370 in its original form as agreed in the 1952 Delhi Agreement,” he said while addressing several deputations of party MLAs, MLCs and workers from Kashmir’s Sangrama, Beerwah, Pahalgam, Hazratbal and Khanyar at the party headquarters, Nawai Subh, in Srinagar.

There was nothing new in the demand that he put forth, saying the state’s return to the pre-1953 position could be the lasting solution to the so-called Kashmir problem. He has been asserting again and again since 1996 that the root cause of the insurgency in the state and alienation of Kashmiri Muslims resulted from the conspiracy of New Delhi and its Kashmiri agents to bypass Article 370 and (the non-existent) 1952 Delhi Agreement between the then Indian Prime Minister Jawaharlal Nehru and the then Jammu and Kashmir Waizr-e-Azam Sheikh Abdullah and bring the state surreptitiously within the purview of Central laws and institutions and thereby erode “Kashmiryat”. (There exists no such agreement as Delhi Agreement).

Will this restoration of the pre-1953 politico-constitutional position strengthen democracy in the state or redress the grievances of the Kashmiris and re-empower them? Even a cursory scrutiny of the political system prior to the dismissal and arrest of Sheikh Abdullah on 9 August, 1953, suggests that it will not.

On the contrary, a restoration will - apart from emboldening believers in the concept of “Nizam-e-Mustafa” and Jammu and Kashmir’s separation from India - at once subvert all democratic institutions, deprive the common people of whatever civil liberties and political rights they have enjoyed so far and fetter the Press and the judiciary. The reason: such a drastic return will arm the council of ministers with absolute, unbridled executive, legislative and judicial powers.

It needs to be realised that between 7 September, 1939 and 26 January, 1957, the state ruler and the ruling elites derived their authority from the Jammu and Kashmir Constitutional Act (JKCA) of 1939. The ruler, Hari Singh, had enacted it to mollify Kashmir-based Sheikh Abdullah and his supporters. They had been demanding since 1931 the replacement of autocracy by democracy.

Though an Assembly of 75 elected and nominated members was set up in accordance with the Act of 1939, Sheikh Abdullah and his colleagues continued their protest. In fact, they repudiated the JKCA of 1939 and declared that they would not withdraw their struggle until a responsible government had been established.They opposed the JKCA on seven counts.

First, it contained provisions which obstructed the formation of a responsible government and facilitated the domination and exploitation of the people. Besides, it was not framed by a Constituent Assembly elected by adult franchise, but by the ruler and his henchmen. It recognised the ruler and not the people as the “fountain head of all essential attributes of sovereignty.”

It did not recognise the “doctrine of supremacy of the legislature.” It did not provide for an independent judiciary. It did not grant freedom to the Press by repelling the highly obnoxious Jammu and Kashmir Press and Publication Act (JKPPA) of 1932 under which the ruling elite could seize any press and fine the Press for “seditious” writing. And finally, it, like the Government of India Acts of 1909, 1919 and 1935, introduced communal electorates.

When, despite their five-year-long struggle, Hari Singh did not introduce any democratic principle, Sheikh Abdullah and other “pro-democracy” leaders stepped up their efforts. In the 1946 Quit Kashmir movement, National Conference cadres openly defied the ruler’s authority, confronted police, attacked police stations and other symbols of the Government, demanded the dethronement of Hari Singh and the establishment of a people’s government. Order was restored only after the police and Army swung into action and imprisoned Sheikh Abdullah and other prominent leaders on the charge of sedition.

It was under these circumstances, and in the wake of full-scale war with Pakistan, that Jammu and Kashmir acceded to India on 26 October, 1947. Ironically, the state’s accession and Sheikh Abdullah’s appointment as Emergency Administrator at Nehru’s behest did not ameliorate the lot of the people. For Sheikh Abdullah, rather than repealing the JKCA of 1939, chose to exploit it to consolidate his position, marginalise his senior colleagues like Bakshi Ghulam Mohammad, Ghulam Mohammad Sadiq, Mohi-ud-Din Kara and Maulan Masoodi and put down his political rivals. He also exploited the JKPPA to muzzle the Press. In short, his rule was as autocratic as Hari Singh’s.

It was only during the reign of Bakshi Ghulam Mohammad (August 1953-September 1963) that a number of steps were taken to democratise the polity. These included the abrogation on 14 May, 1954 of Section 75 of the JKCA under which the Council of Ministers was the final interpreter of the Constitution, the abolition of the largely committed Board of Judicial Advisors, extension of the jurisdiction of the Supreme court of India to Jammu and Kashmir on 14 May, 1954 and the adoption on 17 November, 1956 of a new Constitution by the Constituent Assembly and its application on 26 January,1957.

The people’s natural right to shape and control political, administrative and economic policy was recognised and the Press and judiciary freed to an extent. It is thus clear that a return to the “pre 1953 constitutional position” will grievously harm the legitimate rights of the people of Jammu and Kashmir.

The roots of the Kashmiris’ alienation lie not in Central laws and Central institutions such Supreme Court, Auditor and Comptroller-General and Election Commission but in the Kashmiri leadership’s gross misrule, bureaucratic bungling and denial of the legitimate expression of popular will.

If the Central Government sincerely wishes to conciliate the alienated Kashmiris, it must repudiate outright such perverted demands as autonomy and self-rule, as both these demands only mean a step short of azadi. Acceptance of any of the two demands would not only accord a dangerous legitimacy to the politics of communalism and separatism as is being played by Kashmiri leaders of all hues but it would also facilitate the process of the country’s balkanization.

Even otherwise, such demands can’t be accepted because these have the potential of provoking political explosions of portentous dimension in Jammu and Ladakh. The watchword and battle-cry of the people of these two regions is the complete integration of the state into India and the application of the Indian Constitution to the state in full, barring its Article 370 and Article 35-A which makes invidious, humiliating and unjust distinctions between the “permanent residents” of the state and the rest of the Indians in terms of citizenship rights.