Jayalalithaa, Mayawati And Mamata: The Creators Of Their Own Auras 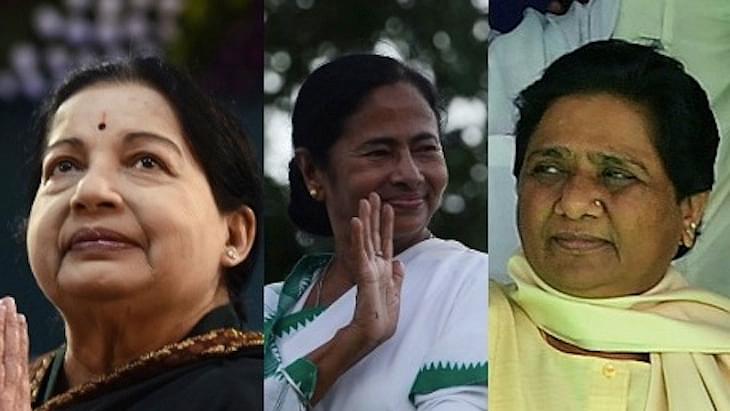 With the demise of Tamil Nadu chief minister and general secretary of the All India Anna Dravida Munnetra Kazhagam (AIADMK), J Jayalalithaa, the strongest player among women politicians in India, has fallen down. However, Mayawati of Bahujan Samaj Party (BSP) in Uttar Pradesh and Mamata Banerjee of Trinamool Congress (TMC) in West Bengal remain. Though there are other women politicians like Sonia Gandhi of the Congress party and Minister of External Affairs Sushma Swaraj and Rajasthan Chief Minister Vasundhara Raje of the BJP, they are subsumed by their parties. Contrarily, Jayalalithaa was put on a pedestal, towering above the AIADMK; same is true of Mayawati and Banerjee.

All these women were and are those who carved a niche for themselves. They all were differently initiated into politics. Jayalalithaa was a cine star of Tamil cinema and played many roles opposite M G Ramachandran (MGR), the matinee idol who joined DMK in 1953. MGR separated from M Karunanidhi, head of the Dravida Munnetra Kazhagam (DMK) to form the AIADMK in 1972 and became chief minister in 1977. Jayalalithaa joined the AIADMK in 1982 and was soon appointed its propaganda secretary. She was sent to Rajya Sabha (1984-89) and after MGR’s death in 1987, manoeuvred to marginalise his wife Janaki to become leader of the party and chief minister of Tamil Nadu in 1989. But her quick rise was not without an assault on her modesty and also on her person within the precincts of the state assembly where DMK MLAs tried to disrobe her. That reminds one of similar treatment meted to Mayawati in Lucknow in 1995 when attempts were made allegedly by Samajwadi Party (SP) goons to kill her in the state guest house.

The case with Mayawati was one of unwilling consent to her mentor Kanshi Ram to join politics in 1977. Kanshi Ram built a strong backward class movement through the All India Backward (SC, ST, OBC) And Minority Communities Employees Federation (BAMCEF) and the Dalit Soshit Samaj Sangharsh Samiti (DS-4) that later culminated in the BSP in 1984, in which Mayawati was given an important role.

But Banerjee is a self-made leader who took to politics early as an activist of the Congress party’s youth wing in Calcutta, and after holding many important positions in party and government, separated from the Congress to form the TMC in 1997. She defeated the Left government that was in power for 34 years and has remained chief minister since 2011.

Interestingly, all these women are single, having decided not to marry. That reminds one of Greek thinker Plato’s admonition that rulers should be without family. Plato also prescribed communism of property for them as they were to be deprived of personal property with the state taking care of all their needs. But, women politicians are not behind their male counterparts in amassing huge wealth. Jayalalithaa declared that her property was worth Rs 113.73 crore during the 2016 assembly polls in Tamil Nadu, Mayawati’s assets were Rs 111 crore in 2012. In stark contrast, Banerjee’s total assets were a meagre Rs 30 lakh as declared before the Election Commission in the 2016 polls.

Both Jayalalithaa and Mayawati were dragged into corruption allegations. The former was found guilty by the Special Court in 2014 and sentenced to four years imprisonment and fined Rs 100 crores for misuse of office and corruption during her tenure as chief minister betwenn 1991 and 96. However, she was absolved of all charges by the High Court in 2015. Mayawati too was charged for possessing assets disproportionate to her income though she was cleared by the Income Tax department and the High Court. However, in April 2016, the Supreme Court decided to reopen hearing in corruption cases against her. Though Banerjee is a little different, leading a modest life, yet she was drawn into the recent Shardha scam in which public money was clandestinely looted through the cartel of politicians, bureaucrats and commission agents.

It is interesting that despite massive riches, both Jayalalithaa and Mayawati continue to be immensely popular leaders in their respective states. Jayalalithaa was a Brahmin, a caste, which is just 3 per cent of Tamil Nadu’s population, but it was her film background combined with MGR’s magic that she quickly earned a place for herself in the Tamil society dominated by other backward class (OBC) who constitute 67 per cent. She integrated her Brahminical lineage with Tamil identity and culture to challenge the DMK that was founded on anti-Brahminism, anti-north Indian, anti-Hindi and anti-Aryan issues. She also developed a new class-constituency for her party transcending caste dynamics, courting women and poor by launching several welfare ‘amma-schemes’ which were either free or heavily subsidised.

Mayawati, on the contrary, had an initial electoral capital in the form of Dalits who were solidly behind her and who constitute 21 per cent of the Uttar Pradesh population. However, Mayawati resorted to social engineering, forming a sandwich social coalition with Brahmins and others to form a majority government in 2007. Only Banerjee in West Bengal took to issue-based politics by opposing the Special Economic Zone (SEZ) proposal of the Left to defend lands of poor and small farmers. While AIADMK’s ideological dispositions overlap with that of DMK, Mayawati pursued Ambedekarite ideology, following identity-based exclusionary politics initially targeting bahujan samaj; later she took a u-turn to pursue inclusive politics based on sarvjan samaj.

Both Jayalalithaa and Mayawati earned a reputation as strong administrators, being harsh to the bureaucracy and party cadre. Both are revered by their party men. Both are charged with being whimsical and tough on law and order. However, while Jayalalithaa resorted to class politics, Mayawati is primarily known for her caste politics. Banerjee is yet to be identified with any such clear constituency affiliation, though she was shrewd enough to appropriate a major part of the constituency of the ruling Left dispensation in West-Bengal.

Jayalalithaa, in her heavenly abode, and Mayawati and Banerjee on earth, despite some differences, would continue to inspire several women aspiring to become politicians for a long time.