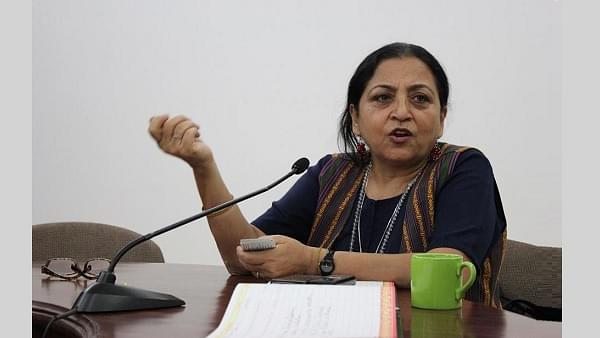 The Left cabal at Jawaharlal Nehru University (JNU) is fighting tooth-and-nail to keep the university as the exclusive preserve of its ideological cohort. And many newspapers and online publications seem eager to believe that any change at the university must have the stamp of approval of this cabal.

Nothing illustrates this more than the ruckus created over the appointment of Madhu Kishwar to the Academic Council (AC) of the School of Art and Aesthetics (SAA) for a two-year tenure by Vice Chancellor (VC) M Jagadesh Kumar. The JNU caucus went apoplectic, as if some lumpen element or a bhelpuriwala had been nominated to the council.

To make things worse, newspapers and online publications wrote slanted headlines, making it seem as if the protests against Kishwar – founder of Manushi, social activist, writer, and someone with a 35-year track record of academic output in diverse fields, including art, literature and much else – was an interloper.

“Madhu Kishwar named to JNU Council, row breaks out over her status as an expert”, claimed The Indian Express. “JNU faculty confused by pro-Modi scholar Madhu Kishwar’s appointment to academic council,” was Scroll.in’s tendentious headline. One wonders what is there to be “confused” about Kishwar’s appointment; the insertion of “pro-Modi” in the headline, on the other hand, is a clear effort to confuse readers and prevent them from questioning the vested interests that oppose her. Anyone who has read her tweets in the recent past would know that Kishwar has often been a trenchant critic of the Modi government’s actions, though not one motivated by malice.

“Did JNU violate norms in appointing Madhu Kishwar to academic council?” asked CatchNews. That’s a “have you stopped beating your wife?” kind of question where the answer is intended to gleaned not from reading the copy, but from the question itself. The Huffington Post headline ran thus: “Madhu Kishwar has been nominated to JNU Council as School of Art Expert, but not everyone’s happy”. One wonders if it is the VC’s job to make everyone happy with his appointments.

While most reports did quote Kishwar on the alleged controversy, none bothered to ask her what she hoped to do at the academic council for the School of Arts and Aesthetics. Their focus was to legitimise the war dance over her induction. The reports quoted a miffed SAA Dean, Bishnupriya Dutt, who assumed an air of injured innocence and said that they sent six names to the Vice-Chancellor, but Kishwar, whose name wasn’t on the list, was picked. Scroll.in quotes her as saying: “We are very confused and bewildered why these names were rejected and somebody who has no connection with our discipline was selected. It has never happened before in the 17 years of this school’s existence.”

Well, Bharat ke tukde, tukde may also not have happened in the last 17 years, but one should marvel at the impertinence of the SAA Dean and her acolytes in assuming that they have a Marx-conferred right to have a lock on all appointments, and the VC should only rubber-stamp one of their nominees. The critical thing that makes a university a university is diversity of views, and so the nomination of people with diverse views from those of the SAA faculty should have been welcomed.

It also requires arrogance of a high level for the Dean to claim that Kishwar had “nothing to do with the study of the arts”. This is bunkum, for Kishwar has made more than 20 documentaries, written a book on Bollywood, and is currently working on traditional art performances. Hardly someone who will be out of depth in SAA’s field.

A tough cookie, Kishwar was unfazed by all the manufactured controversies. She said: “I could understand the fuss if I had been appointed head of ISRO or given the job of Finance Minister. In that case, I would have declared myself incompetent for the job!
But national papers making my appointment as a nominated member of JNU's Academic Council at the behest of a leftist gang of professors in JNU shows how the leftists treat all elite educational institutions – whether public-funded ones like JNU or private-funded ones like Ashoka University – as their exclusive fiefdoms.”

In fact, when she went to JNU on Tuesday to attend her first AC meeting, the Left cabal had organised a bunch of students to heckle and unnerve her. She was greeted with cries of murdabad and hai, hai, and shouts were heard to the effect that Kishwar had been nominated to destroy JNU – as if the faculty and students were not doing enough of this themselves.

Reports about the first meeting of the new academic council indicate that while some of the new inductees expressed displeasure over the rowdy behaviour of the students, none of the faculty members present had a word of condemnation. Clearly, there is a nexus between the faculty and the sloganeering students.

Says Kishwar, “I took a few photographs of their protest and quietly walked past them. Luckily for me, they did not try to obstruct me physically – may be because security guards were posted in good numbers to watch over them.”

Consider the headlines if the same had happened to one of the SLOBs – the secular, left outrage brigades. “Hindutva forces shout abuses as JNU council member”, would have been one headline, and academics would have signed another expressing concern over attempts to stifle independent voices at the university.

The interesting bit about the “controversy” is that Kishwar was apparently warned by some officials at JNU that the media would rake up her nomination even when she was sounded out for the job. But in all the fuss over her nomination, the remaining nominees to the council didn’t register even a tiny squeak of protest.

Madhu Kishwar’s name may have served as red rag to the JNU bull, none of the VC’s other choices drew a murmur.

As a vocal and fearless critic of the Left, Kishwar seems to have sent shivers down the JNU faculty’s spine. They are happier critiquing non-intellectuals and party flunkies, whereas with Kishwar they have a fight on their hands. She gives as good as she gets.