JNU Report Comes Handy For Kanhaiya To Promote His book 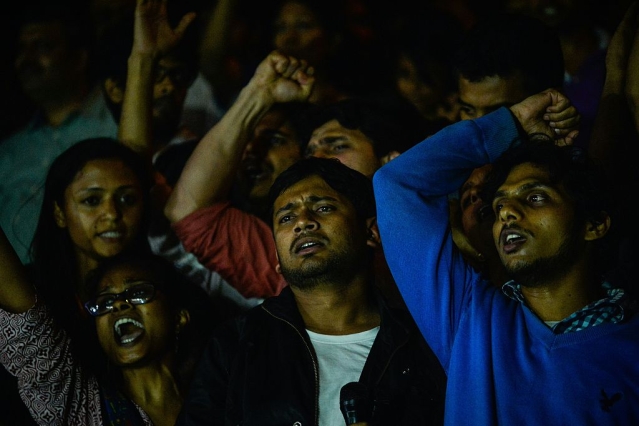 When JNU student’s leader Kanhaiya Kumar said that he will burn the report of the inquiry committee which has recommended disciplinary action against him and other students, he wrote the preface of the book he intends to publish.

Yes, Kumar, who spent 20 days in prison on sedition charges, will pen his journey from a village in Bihar to the jail stint in a book titled ‘Bihar to Tihar’.

Kanhaiya has signed a contract with a publisher for the book that will come out both in Hindi and English.

“I will be completing the book before the start of the next semester,” he said. It surely is a quick fire work. The book is likely to be completed by July-August 2016.

Although the book would be about his personal struggles, it would also cover larger social themes, Kanhaiya said.

The Jawaharlal Nehru University had accused the students of “arousing communal caste feelings, creating disharmony and colluding in the unauthorized entry of outsiders.” The disciplinary committee, probing the role of Umar Khalid, Kanhaiya Kumar, Shehla Rashid and other students affiliated with All India Student Association (AISA) have found 21 students involved in the anti-national activities which occurred on the campus on the evening of 9 February.

Both Umar Khalid and Kanhaiya Kumar have been charged with violating the disciplinary code of University. As part of punishment, the university has rusticated Khalid for the Semester I, and imposed a fine of Rs 20,000. Kanhaiya has not been rusticated. He has only been fined Rs 10,000, whereas, Anirban Bhattacharya has been rusticated till July 2016, and has been barred from pursuing any other course for the next 5 years.

The students and their supporters have declared hunger strike and protests against the penal action announced by the authorities based on the recommendations of a university-appointed committee.

“It is a casteist inquiry committee. We don’t believe the committee nor the penalties imposed, which is why we will burn the report,” said Kumar.

Kumar ruled out going to court against the committee’s recommendations. “We had objected to the high level committee earlier. It wasn’t a Democratic committee...The head (of the committee) Rakesh Bhatnagar ran a movement called India Against Reservation,” he said.

The penalised students alleged that they were neither given the full report not told of the exact charges against them.

Meanwhile, the Left parties had raised the issue in the Rajya Sabha seeking a discussion. CPI lawmaker D Raja said in the Upper House that the university’s decision was “not acceptable.” Describing it as a “revengeful act on students”, Raja said “Parliament cannot sit like mute spectators” leading to commotion in the Rajya Sabha. “What happens in the university is our responsibility because we pass the act,” CPM General Secretary Sitaram Yechury said in the House.