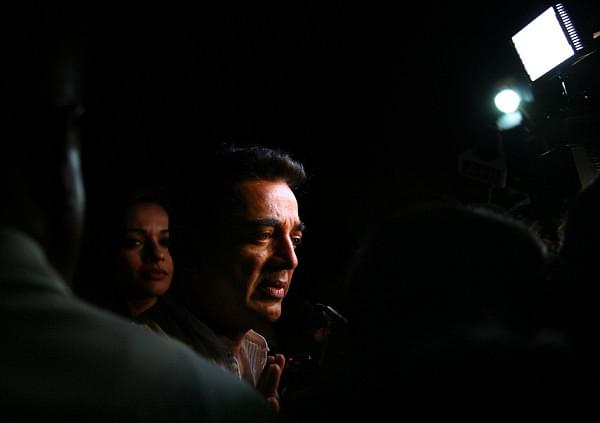 In May last year, Kamal Haasan, who founded the Makkal Needhi Maiam (People’s Justice Party) on Wednesday (21 February), told an audience in Chennai that “it is not the right time for anyone to enter politics” in Tamil Nadu. He was responding to a question on his friend and colleague Rajinikanth’s plans to enter politics.

Until 5 December 2016, when All India Anna Dravida Munnetra Kazhagam (AIADMK) leader and then Tamil Nadu chief minister J Jayalalithaa passed away, Haasan would always say he had no plans to enter politics.

Five years ago, when his multi-lingual film Viswaroopam ran into trouble in Tamil Nadu with the late Jayalalithaa expressing her helplessness in getting the film released, the actor said he planned to quit the country. The same evening, he changed tack to say he was prepared to make any changes to his film and was prepared to move on.

Hassan had similar problems in 2003 when there were protests against the title Sandiyar for his film that was subsequently changed to Virumandi. Then, too, he meekly surrendered to the powers-that-be.

In 2010, when actor Ajit objected to film stars being forced to take a stand on sensitive issues in front of the then chief minister M Karunanidhi, Hassan didn’t utter a word. Ajit, surprisingly, drew support from Rajinikanth – who even applauded him on the stage for the comment, though both of them went and met Karunanidhi separately later.

A browse through archives will reveal how time and again he had said he wouldn’t enter politics. Having been a mute spectator at least until June 2017 before he made his announcement that “he was already in politics”, what forced Haasan to enter politics? His running feud with the AIADMK? On 20 February 2018, he said he was in politics because “AIADMK party is bad”. But is that the sole or real reason? The suspicion is that someone, somewhere, sometime sparked a flame inside him of becoming a successful politician as Jayalalithaa was no more and Karunanidhi is bed-ridden.

Getting back to his statement on AIADMK: If he can give reasons why AIADMK party is bad, then there are equal reasons why the Dravidian Munnetra Kazhagam (DMK) is no better. (With DMK working president M K Stalin terming him a paper flower, Haasan, for the first time, said all parties in Tamil Nadu are corrupt!)

Hassan’s various acts and statements have exposed him so much that he is headed nowhere despite the launch of his party Makkal Needhi Maiam. In one breath while terming all parties in Tamil Nadu are corrupt – no doubt he is blaming AIADMK and DMK that have enjoyed power till now, he says he will succeed in politics following the Dravidian way!

Can Haasan explain that? No doubt, Tamil Nadu has made progress in education and health but can he vouch for the state’s progress in social justice, as the Dravidian parties have always been vouching for? The two-tumbler system still exists and, though unreported generally, honour killings take place. (Over 80 honour killings have taken place in Tamil Nadu, especially in southern district). Even his own native place Paramakudi is a caste-riven area with Dalits on one side and caste Hindus on the other. Does he see this as his path to wielding political power?

Haasan has one similarity with Dravidian leaders, though. The Dravidian leaders had talked of separate state but the actor, in his over eagerness talks of south India uniting as one to put pressure on the central government. In what way is the central government discriminating against south India? Has he ever come up with a convincing argument on this?

Haasan is showing signs of sympathising with the Left parties. Communists, after their phenomenal show in the 2004 elections, are being marginalised across the country. Except in Kerala, where the script could change in 2021, the communists have been yielding ground. In Bengal, communists have become an also ran party. In Tripura, where results are due soon, they are fighting an onslaught from the Bharatiya Janata Party for their survival.

Haasan is way off the mark on the leaders who he says he draws inspiration from. One is Arvind Kejriwal, who was on stage when his party was launched. Does Haasan approve Kejriwal’s hit-and-run tactics? (Kejriwal has been silenced for now by the defamation case filed by Union Finance Minister Arun Jaitley). Has he ever given a thought on the people who surround the Delhi Chief Minister? Has he taken cognisance of the latest development in Delhi? His adulation for Kejriwal has mainly drawn derisive comments from many people.

Second, his views on Kerala Chief Minister Pinarayi Vijayan. He told India Today earlier this month that Hindu extremism was a threat and he was concerned about “saffron” colour. Maybe, he suffers has colour blindness. Otherwise, why should he be blinded to the numerous political murders that have taken place in Kerala, particularly Kannur, after Vijayan took over as the Chief Minister in May 2016? (Statistics show that three killing have taken place every two months since Vijayan came to power). Are all these killings related to Hindu terrorism? How many victims have “Hindu terrorism” claimed? It has become a fashion statement by secularists like Haasan to talk of “Hindu terrorism” without any concrete proof. If Hindu assertion is what he says is Hindu terrorism, then his ideas are blatantly wrong. Probably, his statements are aimed at winning over the Dravidian folks, but when people have seen the game through, will these tactics work anymore?

Keeping these aside, the actor’s performance on stage when his party was launched on Wednesday was nothing less than a comedy.

Haasan’s second point was making the state corruption-free. He says he will not pay money for votes. Well done, but there are other parties, too, in the state that have refused to bribe the voters. But his following statement was like a “Crazy” Mohan dialogue in one of his movies. The actor said he would make people rich by giving them jobs so that they won’t depend on freebies! Does Haasan mean to say people in R K Nagar, where voters during the by-elections in December got as much as Rs 10,000 per vote, are unemployed? Does he mean to say that employment is the only way to become rich? Come on Haasan, we never thought you were so dull-headed!

Haasan says he would work to end caste and religion difference in the society. His talk of Hindu extremism is exactly opposite of what he says. And his statement that he will follow the Dravidian way is another no-goer. Fifty years of Dravidian parties in power and can he tell us if any end to casteism is in sight?

Haasan said none of the existing parties represent his beliefs. What are his beliefs? Has he ever been unambiguous on what he wants to say, including in many of his films? The actor says he is at the “centre” but his talks and statements prove otherwise.

Other views, including the statement that his party wouldn’t have a permanent chief minister, are all indications that his journey may not even last till the corner of the street.

In reality, Haasan could be seen as a new factor for the middle class to see as a hope. But how many among the middle class turn up at the election booth to vote? Can the middle class do with someone who isn’t clear? Can the middle class, who are more conscious of the religion, accept his views on Hindu terrorism? At the most, Haasan could be entertained in the political area by the communists, Viduthalai Chiruthai Kazhagam and maverick Seeman’s Naam Tamizhar party. Others like the DMK, AIADMK, Congress and BJP wouldn’t even want to even touch him with a barge pole. Yes, Haasan can stir the waters but certainly, it will not result in any wave, big or small for that matter.

Two more things: One, the crowd at the ground where his party was launched wouldn’t have accommodated more than 15,000. Second, there are at least two claims that say the emblem on his flag have been ‘inspired’ by the flags of National Federation of Postal Employees and Ek Bharat Shreshta Bharat!