Kanhaiyas Of India Should See Nation’s Development Before Deriding Modi 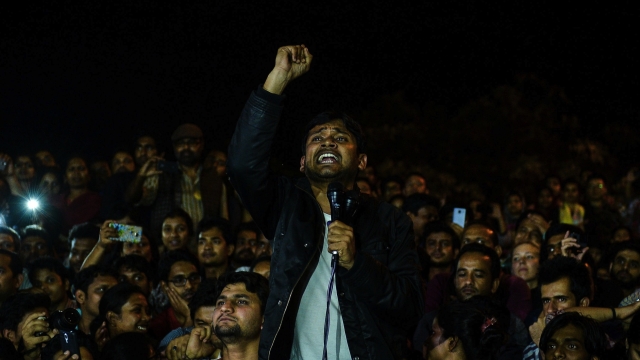 Democracy often throws up an icon at inhospitable moments. One emerges as an icon after years of faultless service in public domain, without realizing that he has become one. Jayaprakash Narayan (popularly known as ‘JP’) was an example of a Sarvodaya leader who channelized the political aspirations of the time against Emergency, a monumental crackdown on dissent.

For two years at the time, the opposition conversed in stilted whispers; a far cry from the shrill and loud voice in which the opposition screams against so-called intolerance today.

It was not the fear of the sedition law under Section 124(A) that pitted JP and the Janata Party against Indira Gandhi. It was something graver – the startling assault on basic freedoms that had happened as they feared.

Even then, JP felt that social development and change had to happen from within, through legislation, and not from without. He could never condone the political allegations of the Indira regime that his andolan was a threat to the pro-poor, progressive ideology of the Congress and ipso facto justified the assault on basic freedoms.

JP’s movement essentially brought down the curtains on the authoritarian tendency of a government which had a proclivity to tinker with the Constitution and citizen’s rights. He was an icon for a cause, not one with an agenda.

There is a new ‘messiah’ that the Jawaharlal Nehru University (JNU) has thrown up – Kanhaiya Kumar – who appeared to be a whiff of ‘fresh air’ to English media channels, though he sought, among other dubious exhortations, “azadi from hunger”, without explaining why hunger persisted in India, despite being ruled mostly by the Congress for 68 years.

With it came the call for a host of ‘azadis’ from casteism, religious dominance, manuvadi etc, which ignored the inescapable nexus of bureaucratic corruption, vote bank appeasement and kickback regime under the UPA, which had left the economy staggering with 10 lakh unemployed graduates tumbling into the market every year, stagnant eastern states sending a large fleet of their people elsewhere for jobs and farmers seeing no break of a dawn.

He was a godsend for the Left, which got only 4 percent of the votes in 2014 and was badly in need of resuscitation. For the Congress, he was the pivot around whom their flailing campaign had to take off. Little did he realize (not that he couldn’t comprehend) that he was being courted by the very forces who were responsible for all the ills he had listed.

Modi bashing was the carrot dangled before him, and he latched on to it gleefully. But he didn’t understand the economic policy taking shape under Modi, which is giving India a break from the stifling past.

Setting bureaucrats on track, for instance, with bureaucrats being asked to expeditiously dispose off individual complaints. Spectrum and coal auctions, electrification of 18,000 villages within 1,000 days, increased road laying, rail lines and traction, highway development etc followed as a corollary to it.

Perhaps the policies which have had the profoundest impact are the Jan Dhan Yojana (its 21 crore accounts have aggregated over Rs 34,000 crore, mostly Aadhaar seeded) and the Aadhaar Bill, which make digital transfer of subsidies and relief amounts to the poor, effective and free from middlemen.

For a country besieged by red tape and corruption, this is a refreshing break from the past, despite impediments and complaints in its wake. All of these were followed by a series of schemes such as the crop insurance scheme for farmers, Beti Bachao Beti Padhao, and a greater share of revenue for states from the central pool.

In fact, central schemes have been reduced from 62 to 27, leaving larger space for the states to work with. With a section of farmers in Uttar Pradesh berating the bouncing of relief cheques recently, digital transfer appears to be the sole medium of rooting out middlemen. Yet, results don’t happen overnight.

While imagining manacles on his freedom, Kanhaiya Kumar has no answers for poverty, except the doctrinaire ones handed down through generations by the Left. The Congress dabbled with them in the shape of a mixed economy, with public sector enterprises slowly sliding into the red.

Though farm growth was substantial in states like Punjab, Maharashtra and Madhya Pradesh, the ‘Licence Raj’ had all but destroyed industrial growth and entrepreneurship.

So much so that the Chandrashekhar government had to sell gold to pay off public debt, even as India’s growth rate was abysmal. It was Prime Minister Narasimha Rao who shrugged off the past in favor of economic liberalization.

The need of the hour for India is good governance, not time-worn mantras. For decades, deliveries mattered less than deliverables, leaving 40 percent of the population below the poverty line without access to banks, jobs or statutory benefits.

On 22 March, the Prime Minister was engaged in a coordinated plan to transform the bureaucracy and redeploy retirees in the monitoring of flagship government schemes. The malaise of misgovernance, as evidenced in MGNREGA, needs immediate attention and reordering. Results will show the quantum of progress made, but the direction cannot be faulted.