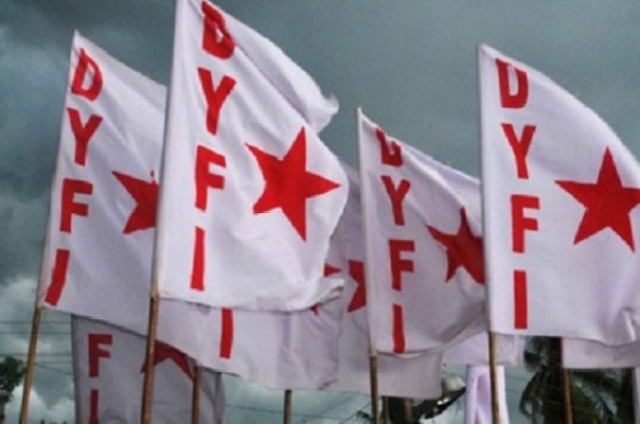 Four members of the Democratic Youth Federation of India (DYFI), the youth wing of the Communist Party of India-Marxist (CPM), have been arrested by Kerala police in Malappuram district for a threat they reportedly made against local Congress leaders.

The DYFI members allegedly made the threat by raising slogans at a rally at Moothedeam in the district, a complaint filed by the Indian Union Muslim League at the Edakkara police station said.

Malayalam daily Mathrubhumi reported that Moothdeam village DYFI secretary PK Shafeeque and three other members were arrested by police for making the threat.

The arrest follows a hue and cry raised over the slogans made at the rally taken out following a clash with the Congress.

What remains to be seen if the slogans raised at the rally would be treated as some sort of extra-judicial confession since it pertains to a murder of a Muslim Students Federation (MSF) leader eight years ago.

At the 18 June rally, the DYFI members raised the slogan that the Congress should not forget “the golden sword that chopped off (Ariyil Abdul) Shukoor has neither been thrown into the Arabian sea nor has it rusted”.

The raising of the slogan has put the CPM-ruled Left Democratic Front (LDF) in Kerala in a spot as the State government had argued against Shukoor’s mother’s petition for a Central Bureau of Investigation (CBI) probe into her son’s murder.

The State government spent Rs 50 lakh from the exchequer to engage a high-profile lawyer from New Delhi and argue against handing over the case to the CBI.

The Kerala High Court handed over the investigations to the central agency, though.

The Shukoor case pertains to the murder of MSF leader Ariyil Abdul Shukoor following an attack on a group of CPM workers on 20 February 2012.

Thirty-three persons, including CPM Malappuram secretary P Jayarajan and the party’s MLA T V Rajesh, have been accused in the murder case, in which Shukoor was hacked from behind while trying to flee from a murderous group of CPM workers.

CBI has said in its chargesheet that Jayarajan and Rajesh conspired at a hospital where they had gone for treatment after being injured in an attack by a group of Muslims at Ariyil village.

Jayarajan and Rajesh went to Ariyil, where Muslim enjoy a majority, after some CPM workers were attacked.

A mob gathered on the main road on hearing rumours that police were heading to their village after the clash.

Their vehicle was blocked by the mob on the main road which was not aware that Jayarajan and Rajesh were inside it.

Jayarajan came out since he thought the mob can identify him and let their vehicle proceed.

However, the mob began attacking both once they knew their identity.

Both, however, managed to escape from the scene and went to a nearby hospital for treatment at around 11 am.

On coming to know that Jayarajan had been attacked, a group of CPM workers at nearby Keezhara cornered Shukoor and four of his friends who had gone there.

The five took refuge in a house, whose owner refused to hand them over to the CPM workers baying for their blood.

But as the owner went to get the phone number of the local police station from a neighbour, one of the workers broke open the house and confronted Shukoor and his friends.

Though the five denied having any role in the attack on Jayarajan and Rajesh, the workers noted down their details and sent their photos across to the CPM leaders.

Three of Shukoor’s friends were dragged by a group of nearly 200 CPM workers to a nearby field around 2 pm and attacked repeatedly.

The three, however, managed to escape.

Thereafter, Shukoor and his other friend were dragged to the field. Both of them were attacked with “sharp weapons and tools”.

Shukoor attempted to escape and began running across the paddy field where he was being attacked.

This helped his other friend to escape but the CPM workers hacked Shukoor to death.

The CBI has said that there was detailed planning in which the CPM leaders were involved at several levels and Shukoor was hacked “to implement the sentence (handed out by the party) in a professional manner”.

Political experts wonder if the DYFI was making it obvious to the people that Shukoor was targeted and murdered by the party to avenge an attack on its party leader.

For now, the CPM is trying to wriggle out of embarrassment by relieving Shafeeque from the responsibilities he had been handling as “he had humiliated DYFI in public”.