Kerala Government Has Miles To Go On Sanitation Front At Sabarimala 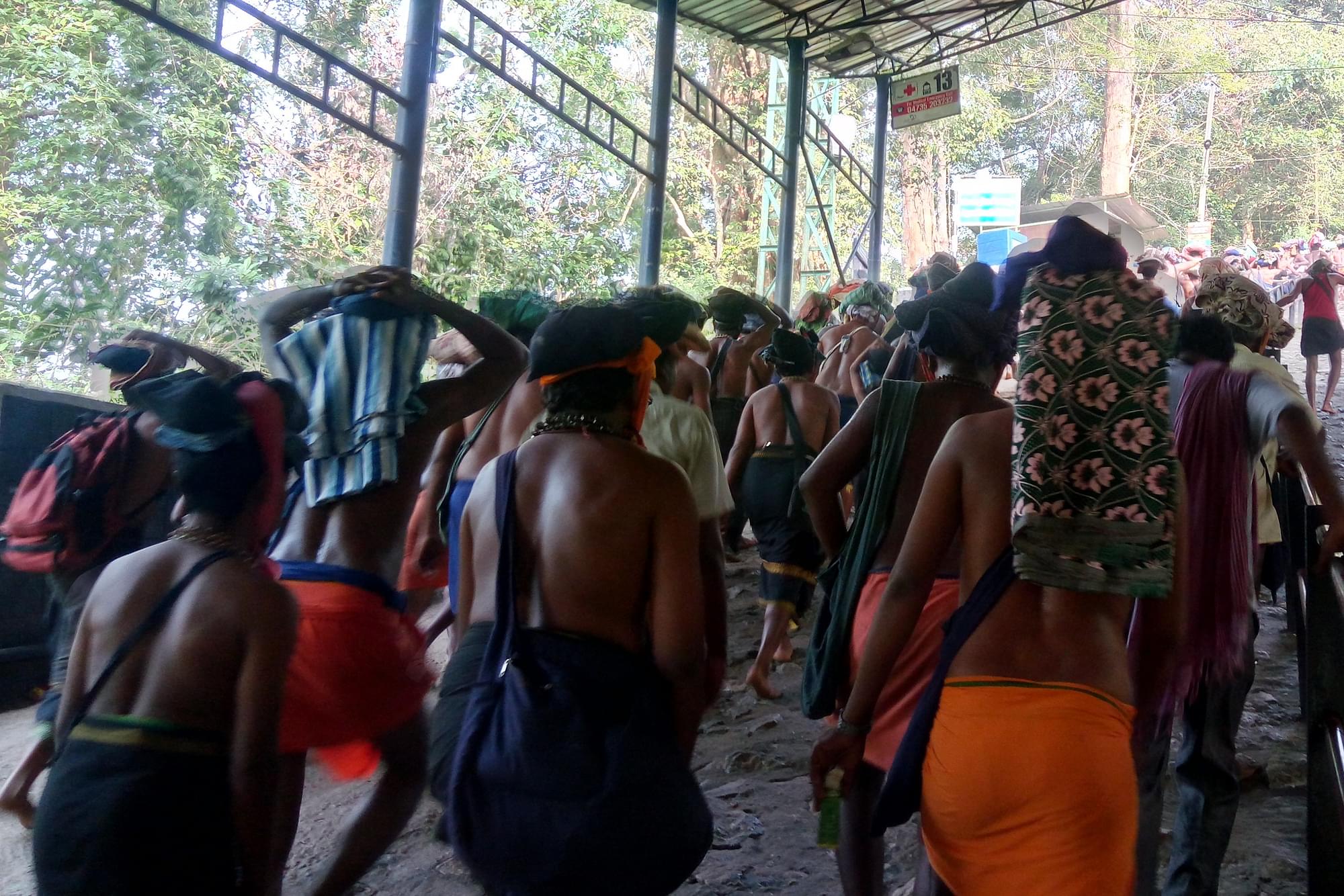 Pilgrims climb the Neelimala up on their way to the Sabarimala Ayyappa temple. Not a single toilet is available on the trek from the bottom of Neelimala to the top of it.

Kerala faced its worst ever floods in about 100 years this year. In August, nearly 10 districts in the state were affected as a result. Pamba, the base camp from where pilgrims trek uphill to reach the Sabarimala Ayyappa temple, was one of the worst hit with heavy damage being reported there.

Not that sanitation at Sabarimala is something to write home about. Every year, there are reports of sanitation-related issues and, in the last few years, a high incidence of coliform in the Pamba River has also been reported.

The current mandala season, on from 16 November 2018 to 20 January 2019 with a break during 28-29 December, when most pilgrims throng Sabarimala, therefore assumes significance. More importantly, it has to be viewed in the background of the damage caused by the floods.

New facilities have come up at Nilakkal, which now serves as the base camp as all vehicles have been ordered to park here before pilgrims take a Kerala State Roadways Transport Corporation (KSRTC) bus. But, how do these facilities fare?

On landing at Nilakkal, a pilgrim is greeted with slushy ground, especially near the KSRTC terminal that takes pilgrims to Pamba. The path to the toilets are also muddied, and if any pilgrim is caught unaware, he or she could slip and fall.

The new toilets haven’t been completed fully yet. These toilets lack pipe water. Anyone needing to use the toilet has to fetch water in one of the small buckets kept near a well from a bigger drum. A person then carrying water in a small bucket to the toilet will be in for more shock. The toilet complex lacks light, and there are no lights in the toilets itself.

Nilakkal being an area where there is dense growth, with the Travancore Devaswom clearing nearly 1,450 trees to build new facilities, there are chances of snakes and deadly insects taking refuge in the toilets. One has to be wary of such dangers there.

More importantly, Pinarayi Vijayan’s Left Democratic Front (LDF) government is keen to implement the Supreme Court order that allows women of reproductive age also to enter the Sabarimala Ayyappa temple. Suppose if many women turn up, what security is there for them in these dark toilets?

The PCB letter also talked of the danger due to lack of enough sewage collection tanks at Nilakkal. If such a thing happens, pilgrims could face the danger of catching e-coli, among other such diseases.

Fortunately for the LDF government, this year, the crowd, thanks to the controversy on women of reproductive age being permitted to enter the temple, is far less than what one normally sees even during the off-season period, when every Malayalam calendar month the temple is open for five days.

Surprised over the way the slot for the parking of buses has been developed, one is curious to know if it came up after the floods. “No, this was got ready two years ago. It is coming good now,” said an auto-rickshaw driver.

If the bus parking space was ready two years ago, what stopped the state government from getting other facilities like toilets ready along with that? After all, the LDF government was planning to stop vehicles till Nilakkal itself long ago and the floods this August have only provided it with a great opportunity.

As one treads through the slippery slush and gets to the KSRTC bus stand, there is more displeasure in order. Buses are full early in the morning with pilgrims wanting to take part in ghee abhishekam. Every bus, once it brings back a group of pilgrims to Nilakkal from Pamba, is parked at the parking space allocated for all buses uphill, some 750 metres from the bus stand. This is to ensure the drivers get adequate rest, but no effort seems to be made to see if the buses are clean.

The floors of the buses are all dusty brown in colour from the slush the pilgrims carry on to the buses. The unclean buses do leave a chance for the pilgrims to catch infection. Overall, things look dirty and messy as one leaves Nilakkal for Pamba.

As the bus nears the Triveni bus stop at Pamba, one can see many bio-toilets. But with the stop being far away, no one seems to be interested in using them. In fact, they are seen closed at most times, too.

At Pamba, a narrowed river is a matter of concern. The steps on the banks have been washed away and pilgrims’ clothes left behind is another concern for public health. Pamba River also seems to be at a standstill with the colour of the water being dark.

After many toilets were washed away and rendered unfit for use by the floods, the Kerala government has redone one of the toilets and constructed a new complex. But the construction of the toilets with aluminium separation is shocking.

There is a gap of half a feet at the bottom for each separation. This leaves toilet users facing problems if the person in the next toilet uses water. Water from nearby toilets enters these toilets and poses dangers of pilgrims catching communicable diseases.

In a couple of toilets, the flooring has slipped lower with water turning stagnant. The Kerala government seems to have constructed these with a hurry, but the thought process hasn’t taken account of the dangers such a construction would pose.

As pilgrims trek up the hill from Kannimoola Ganapathi premises, not many toilet facilities can be found, at least until they reach Neelimala top. Again, no facility is in sight till Sabari peedam, from where pilgrims who have online booking for the darshan (view) and those who don’t have are separated.

For those who have online booking for the darshan, there are quite a few toilets leading up to the nada pandal, the corridor that takes pilgrims to the foyer leading to the holy 18 steps. But there is a problem. Toilets for women are kept along with urinals for men. This could cause uneasiness for women to approach these bio-toilets.

For those who don’t have online booking and have to trek up a difficult path, there is only one open urinal for men while there are no toilet facilities either for men or women. Once pilgrims enter the nada pandal, go up the 18 steps, take the ramp, take the darshan of Ayyappa at the sanctum sanctorum, then head towards Maligai Purathu Amman temple and come out, there are no facilities nearby.

Earlier, people could come out after the darshan and head towards the room they would have taken. But with the Kerala government not allowing pilgrims to stay atop, there could be problems for those who need to pass urine often.

On the trek down to Pamba from the Ayyappa temple, after Sabari peedam, when pilgrims go under the bridge there and walk on the road that is used by vehicles, there are a number of toilets, again with women toilets between urinals for men.

Not many are seen using the toilets, and in some places, pilgrims can be seen urinating in the open at a stretch nearing the bottom of Neelimala. But such a lack of proper toilets spaced out evenly on the hill could result in open defecation, an issue flagged by the PCB in its letter.

There is one good thing, though. The Kerala government has set up drinking water facilities with reverse osmosis technology. Unfortunately, when a group of pilgrims tried to use the facility, no water came out of two of the four taps there.

Overall, there are issues that need to be attended to at Sabarimala. Unfortunately, the Pinarayi Vijayan government seems to be more keen on other things like getting women of reproductive age to enter the Sabarimala temple despite stiff opposition from a majority of the state’s people.

The Vijayan government has miles to go to get proper sanitation facilities in place.