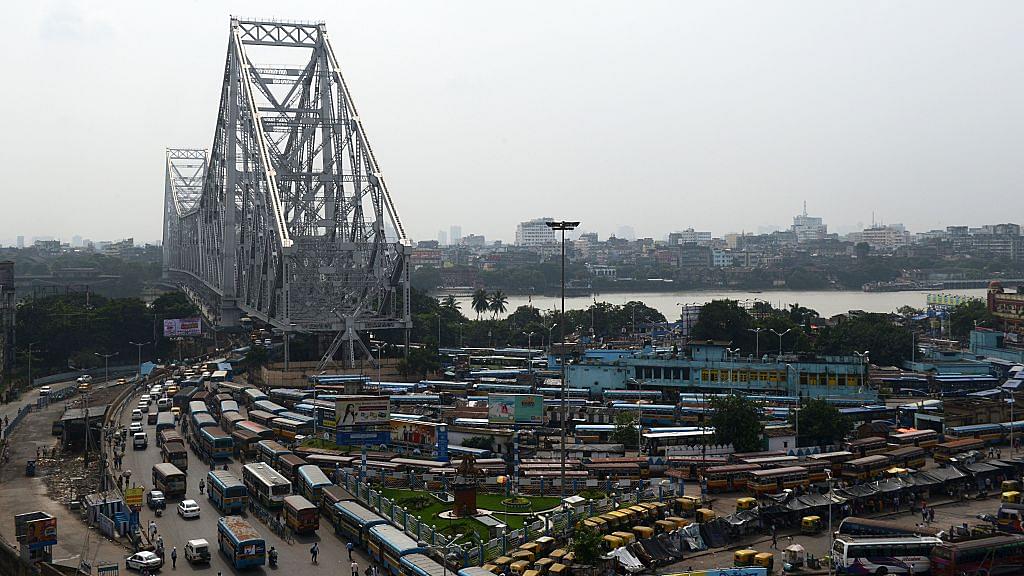 Public vehicles wait for passengers in the depot near Howrah bridge. (DIBYANGSHU SARKAR/AFP/GettyImages)

Kolkata was born on 1 January 2001. At the time of its birth, the communist masters of its destiny had held out the hope that new baby would blossom into a beautiful child that would be the envy of the rest of the country and the world. But they were optimistic beyond reason and logic. A child born in poverty and darkness, and born out of ignorance and a regressive social and political philosophy, mid-wifed by short-sighted proponents of a failed ideology, is destined to be a disappointment and a failure in life.

And so has been the case with Kolkata. Cursed at birth by circumstances, environment and the people around it, the city has bumbled along to become an adolescent pockmarked with ugly vestiges of its recent history. Admittedly, the intentions of this child’s first guardian – Buddhadeb Bhattacharjee – were honest and noble. At least at the very start. But even before the child could learn to take its first steps, the guardian started floundering.

In the first four or five years since its birth, the city did evoke a little bit of optimism. Bhattacharjee started making a serious attempt to jettison the tired, dogmatic and hypocritical cliches, ideas and rhetoric that marked the city’s, and the state’s, guardianship of his predecessor and the fellow communist travellers. He tried to make a break from the past and attract much-needed investment which, he realised, would provide jobs to Bengal’s hungry and jobless millions.

Kolkata’s white dhoti clad and grey-haired guardian tried to infuse work culture into the state’s bureaucracy that was notoriously slothful. He even coined a slogan – 'let’s do it’ – inspired no doubt by Nike’s famous ‘just do it’, to motivate the masses. Bhattacharjee's clean image and his earnestness started making an impression and investors started evincing an interest in the state. Ratan Tata announced he would set up the Tata Motors’ small car plant near Kolkata. That was the first big ticket investment the state had seen in decades, and the mood became celebratory.

Kolkata, the new baby with a long and mixed past, also started getting a glow on its face. Slowly, the despairing grey of Calcutta started fading and Kolkata started seeing daubs of colourful paint on its cheeks and face. The promise of spring was in the air and Kolkatans felt they could at last look to the future with hope. After decades of neglect, the city started seeing some development – its infamously potholed roads started getting repaired, new flyovers were planned, shopping malls and multiplexes started coming up and signs of the good life started manifesting, albeit very gradually. Kolkata started catching up with the other metros and, of course, its own glorious past.

So high were the hopes that the young Kolkata would start resembling the old Calcutta (of the first half of the last century) that many doctors, engineers, scientists, teachers and professionals who had left Calcutta, disheartened and disgusted, since the late 1960s and early 1970s, started returning to Kolkata. Many businessmen and industrialists who had fled the anarchic, communist-ruled Kolkata that became virulently anti-capital, started thinking of exploring new business opportunities being created in the state. There was enthusiastic talk and high hopes of Kolkata becoming a new IT and ITeS hub, an education hub, a medical hub, a garments hub et al, and the state becoming a powerhouse of engineering that it once was.

But then, by the time Kolkata turned six, things started going horribly wrong. There was Nandigram and Singur that totally took the wind out of the sailboat Bhattacharjee was steering towards the golden sunrise. A mercurial street-fighter lacking in vision and governance skills appeared as the saviour of Bengal. Mamata Banerjee started capturing the imagination of Bengal’s masses, who, despite the promise of a bright future held out by Bhattacharjee, could not get over their deep-rooted suspicion, distaste and even antipathy towards capital. After all, they had been brainwashed for decades into believing that capitalists were rapacious, blood-sucking folks out to make a buck at the expense of the poor. They just couldn’t believe their communist helmsman now saying that private capital is good for the masses. And Bhattacharjee also faced strong opposition from his fossilised but powerful party apparatchik. His own ministers sabotaged his plans of nurturing Kolkata into a city that was once the famous and glorious Calcutta.

Thus, a few months after Kolkata turned 10, and at an age it needed the right sort of parenting and guidance, it got as its guardian a person, who was absolutely unsuited to the task at hand. Banerjee singularly lacked governance skills, and remained focused solely on politics. After the exit of the Tatas from Singur, there was no way other investors would step into Bengal. Despite the business jamborees she hosted and where she announced investments worth hundreds of thousands of crores, little appeared on the ground. What happened after 2011, when she took over the reins of Bengal, is too well known to be repeated here. Suffice to say that darkness and gloom re-appeared, and Bengal’s all-round decline that started with the communist takeover of the state in 1977 continued.

As for Kolkata, this young child who had looked forward to some exciting years as a teenager suddenly found himself sliding back to the murky cesspool that he was born in. Hopelessness started in his face. True, some cosmetic changes were made – he was given a blue and white uniform (the colours dictated by the angry lady guardian) to wear, and some parts of his body were decorated with made-in-China fairy lights. Construction of roads and flyovers continued, largely with largesse from New Delhi. The city’s parks were given a makeover, the riverfront was beautified et al. But as the venom-spewing and fire-breathing angry lady who became Kolkata’s guardian became more leftist than the left and started pursuing disastrous policies. Governance took a backseat and as her partymen held the state to ransom, Kolkata’s growth got stunted.

Ironically, Kolkata’s present guardian has, at various times, wanted to refashion the city on the lines of London and Singapore. Kolkata, now 17, cannot, and need not, be a London or a Singapore. Because that is not its fate. It can, though, try to be the Calcutta of the past, a city that bred and nurtured scientists, litterateurs, thinkers, philosophers and great nationalist politicians. A city where various communities – Parsis, Jews, Armenians, Anglo-Indians, Tamils, Malayalees, Gujaratis, Marwaris, Punjabis and many more – lived happily with the Bengalis and all contributed to the social, cultural and political landscape that made the city such a great one.

This is, of course, not to whitewash the bloody riots, the famines, the pestilences and the successive waves of desperate refugees that overwhelmed Calcutta in the late 1940s and again in the late 1960s till 1971. Calcutta had its warts and all, but it was a city that throbbed with life, including the high life, and where fortunes and reputations were made. Kolkata today is an inward-looking city, populated mostly by despairing and desperate masses with little hope of a bright future. Kolkata doesn’t have Calcutta’s cosmopolitan character. Kolkata lacks Calcutta’s glory. Kolkata, as many Bengali intellectuals and litterateurs, who argued for the change of the city’s name (from Calcutta to Kolkata) had envisaged, has become a Bengali city.

Kolkatans, alas, have no affinity for a chicken ala kiev or a lobster thermidor that were the signature dishes at those glorious Park Street restaurants in Calcutta. Kolkatans who go there today haven’t graduated beyond chilly chicken and mixed chowmein. Calcuttans used to order for the famous Chateaubriand at the popular Olypub on Park Street, Kolkatans order for the beef steak. New Year’s eve revellers last weekend grooved to popular Bollywood chartbusters at even the best party venues at Kolkata; more than five decades ago, when India’s glitterati converged at The Great Eastern (The Savoy of the East, as it was known as), Oberoi Grand or Calcutta Club (thank God its not become Kolkata Club) to usher in the New Year, they would jive to a Billie Holiday or a Duke Ellington. Not anymore.

In its 17th year, when Kolkata ought to have been eagerly looking forward to stepping into young adulthood, it finds itself sinking more and more in the quagmire of poverty and ignorance caused by bad politics and poor governance that has come to characterise Bengal over the last four decades and more.