Krishna Janmabhoomi Plea Dismissed: What Was The Litigant's Argument And What Is The 1991 Law On Basis Of Which It Was Rejected? 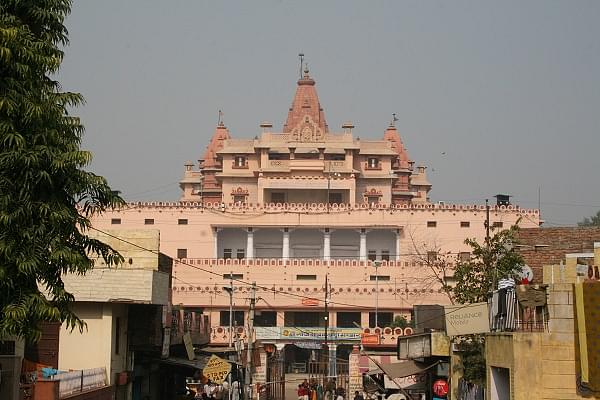 Ranjana Agnihotri, a Lucknow resident, had filed a suit in the court of civil judge, senior division, Mathura, on behalf of Bhagwan Sri Krishna Virajmana, seeking the removal of Shahi Idgah adjacent to the Shri Krishna temple complex.

The UP Sunni Central Waqf Board and the Committee of Management of Trust of Shahi Idgah had been arraigned as defendants in the suit.

On Wednesday, the court dismissed the suit. Additional District Judge Chhaya Sharma refused to admit the suit citing the bar under the Place of Worship (Special Provisions) Act of 1991, reports Hindustan Times.

The suit claimed that the Shahi Idgah trust, with the help of others, encroached upon the land belonging to the deity, and illegally erected a structure.

It stated that the Krishna Janmasthan is beneath this structure, and wants the entire 13.37 acres land to be restored to the rightful owner Bhagwan Sri Krishna Virajmana.

The suit claimed that in 1968, Shri Krishna Janamsthan Seva Sansthan, the governing body of the temple complex, entered an illegal compromise with the Shahi Idgah trust with a view to grab the property in question.

“The Shree Krishna Janmasthan Seva Sansthan is working against the interest of the deity and devotees and fraudulently entered into a compromise with the Committee of Management of Trust Masjid Idgah (Trust) in 1968 conceding a considerable portion of property belonging to the deity and the trust,” the suit said.

On 20 July 1973, the civil judge, Mathura, passed a judgement on the suit approving the 1968 compromise between the Krishna Janmasthan Seva Sansthan and the Trust. The present suit prays for “cancelling this judgement” as it protects an illegal compromise.

The issue: Mughal ruler Aurangzeb attacked the temple and built an Idgah

As per the Hindu traditional source Deomaala, Bijrani, the great grandson of Shri Krishna, was the first to build a temple here. Afterwards, a magnificent temple was built here during the reign of Chandragupta Vikramaditya in 400 CE.

Muslim & Arab Perspectives (1995) calls Mathura “a centre of Hindu civilisation and culture” and notes that the city was plundered by Mahmud Ghaznawi in 1017 CE and the temple was demolished.

Mahmud Ghaznawi's Mir Munshi Aal-e Utnawi describes it in his Tarikh-e Yamni - a grand temple in the heart of the town which was so beautiful that the people used to say that it was built by devtas instead of human beings.

Later, during the reign of the Mughal Emperor Jahangir, Raja Veer Singh Deva Bundela of Orchha rebuilt the temple by spending the equivalent of Rs 33 lakh. It was known as the Jai Dev Mandir.

The French traveller Latorenier and the Italian traveller Manucci have described it in their travelogues written in 1650. The remains of this temple reportedly still exist.

Later on, in 1669, the temple was again demolished on the orders of Mughal ruler Aurangzeb who built the Idgah mosque at the site.

“After Marathas came to power in 1770, the temple was restored,” says the suit.

In 1803, East India Company grabbed hold of the Shri Krishna Janmasthan land and auctioned it in 1815. It was purchased by Raja Patni Mal of Banaras.

His ownership of the 13.37 acres of land, on which the Idgah built under Aurangzeb and the Hindu shrine are located, was upheld by the Allahabad High Court in 1935.

In 1944, the heirs of Raja Patni Mal executed a sale deed on consideration of Rs 13,400 (paid by Jugal Kishore Birla) and the ownership of 13.37 acres was transferred in favour of Madan Mohan Malviya, Goswami Ganesh Dutt and Bhikhen Lalji Aattrey.

In 1951, Shri Krishna Janmasthan Sewa Sangh was set up to build and manage a temple on the land.

Does the civil suit still have a chance?

The prospect of a bhavya temple coming up close to the Idgah irked the mosque-goers. Reportedly, there were some communal incidents over the issue as well.

Finally, on 12 October 1968, an agreement was signed by Deo Dhar Shastri on behalf of the Shri Krishna Janmasthan Seva Sangh and Muhammad Shah Meer Malik and Abdul Ghaffar on behalf of the Shahi Masjid Idgah Trust. The UP Sunni Waqf Board had consented to the agreement.

The agreement divided the land between the two parties, and around 300 years after the demolition by Aurangzeb, a magnificent temple was reconstructed at Shri Krishna Janmasthaan.

The suit claimed that the land belongs to the deity Bhagwan Sri Krishna Virajmana, and Trust had no right to dispose-off the parts of the 13.37-acre land which Allahabad High Court had already adjudicated to be in the rightful ownership of the Raja of Benaras in 1935.

It is a well-recognised principle that a trust has to manage the property on behalf of the deity and its actions that run contrary to the interests of the deity can be nullified.

However, the Places of Worship (Special Provisions) Act enacted by the Narasimha Rao government in 1991 at the height of the Ayodhya Ram temple dispute is a hurdle to the suit.

The law exempted the Ayodhya issue from its purview as it was already under adjudication.

The Indian landscape is filled with mosques erected on the land where previous Hindu and other Indic faith structures stood and were demolished under the Muslim rule. The law was purportedly passed to preempt any legal recourse regarding the Shiva temple in Varanasi and the Krishna temple in Mathura.

The law has been challenged in the Supreme Court for arbitrarily and retrospectively fixing the cut-off date of 15 august 1947 which denies Hindus their right to a civil remedy in the case of illegal encroachment made on their religious property.

However, in the recent Ayodhya Ram Temple verdict, the Supreme Court had said that the 1991 law was “a legislative instrument designed to protect the secular features of the Indian polity, which is one of the basic features of the Constitution.”

The popular argument against the Mathura and Varanasi temple issue is that it might cause large scale chaos and communal disharmony. It would make the Muslim community feel insecure, and that since a large number of mosques are standing on demolished Hindu structures, restoring all of them would be impractical.

While it is true that a large number of temples were demolished and converted into Islamic structures by force, it is also true that the place of Ayodhya, Varanasi and Mathura is very significant in Hindu history and civilisation.

These cities are as important for Hindus as the Mecca in Saudi Arabia for Muslims, or the Vatican City for Catholics.

The latter is a theocracy ruled by the Pope where all the citizens, residents and places of worship in the city are Catholic. Under the Saudi law, non-Muslims are not permitted to enter Mecca and cannot publicly practice their religion anywhere in the country.

This is not to say that this is the standard that Hindus aspire for, but that these are the standards that the above-mentioned communities find comfort in, in order to maintain the safety of the most important centres of their religion.

A 2017 Pew research notes that more than 80 countries out of 199 studied favour a specific religion. All of these favour Islam or Christianity except two (Bhutan and Laos for Buddhism).

The third largest community in the world, close to a billion Hindus (14 per cent) form the majority only in India, Nepal, and have no official recognition.

India has had a long and bitter history of Hindu persecution. Those wounds can never be fully healed. But restoration of significant Hindu places of worship that were barbarically demolished accompanied with mass killings would certainly indicate a commitment to fight the ideas that inspired such acts, and increase the trust between the communities.