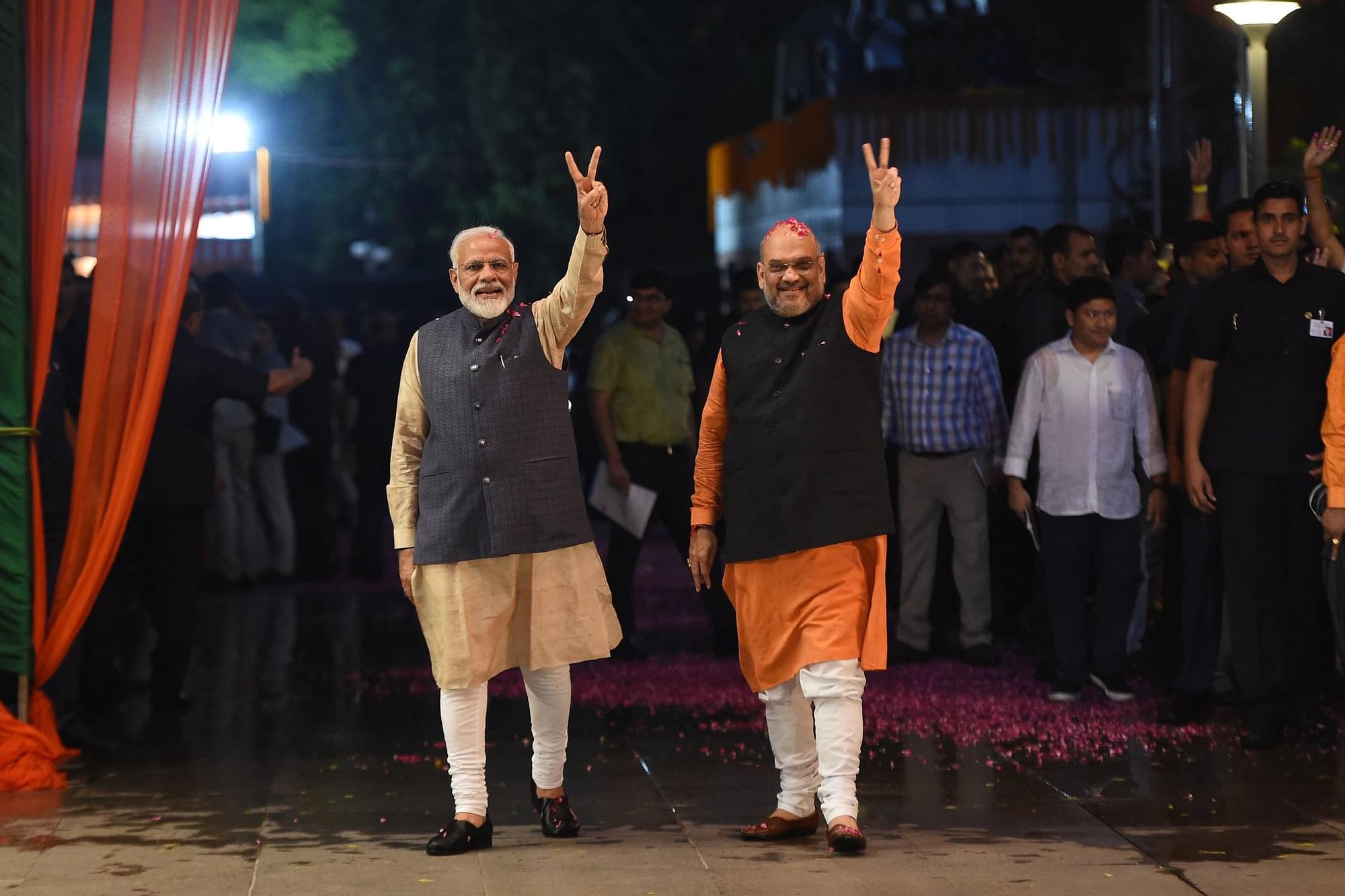 In Narendra Modi’s political dawn around 2012-13, before he was announced as the prime ministerial candidate for the National Democratic Alliance (NDA), social media played a critical role.

For many young voters, especially those born in the 1990s, the first tryst with Modi and his political ambitions and governance ideas came to light on social media platforms.

Yes, of the 330-odd seats won by the NDA in 2014, not even 30 can be attributed to their social media presence, but Modi, and later Bharatiya Janata Party (BJP), back in the day, were owning the narrative on all social media platforms while debunking the claims of the Left.

In terms of political communication and posturing, it was an unparalleled and unprecedented move.

How the BJP missed the obvious digital breadcrumbs being thrown around across social media platforms in the last 18 months, starting from the anti-CAA (Citizenship Amendment Act) protests to the recent Covid-19 toolkit, is one that will baffle many.

However, the ideal thing is to look ahead, prepare for a battle of narratives that will play out every day, every hour, and every minute across a digital battleground that shall encompass a billion Indians, along with millions and millions of observers from foreign lands.

Firstly, it is imperative to understand the pitch conditions, since the war of narratives is going to play out like a Test Match.

Thanks to the digital revolution stemming from affordable Internet access, one of India’s greatest stories from the private sector, the number of Internet users online have grown remarkably. In late 2013, at the peak of Modi’s campaign, there were less than 200 million Indians online.

By 2019, the number increased to more than 630 million, and if the projections, unhindered by pandemic induced slowdown, are to be believed, we shall have more than a billion Internet users by the end of 2023.

In the last seven years, the platforms have also evolved. No longer is Facebook the go-to platform for most of the voters. The war on narrative has shifted from Facebook pages to Twitter handles, WhatsApp updates and forwards, Instagram posts, stories, and reels. YouTube has more subscribers on some channels than the population of many towns and cities.

The accessibility has also evolved. No longer does one need television to access news channels or any other entertainment options. YouTube, amongst other social media platforms today contain enough perspectives, opinions, and narratives that can be critical in shaping political thinking every day, and especially during the elections.

Two, about the opposition, for while playing the Test Match, understanding of the bowling and batting combinations is necessary.

The opposition here includes all the parties that will come together to form a coalition against the NDA. Also, to paraphrase the recently surfaced toolkit of the Left, the opposition shall include ‘like-minded media’, ‘friendly academics, journalists, and other influencers’, some select media organisations, and RTI (Right to Information) activists, and the reported 500,000 ‘social media warriors’ set to be hired by the Congress. This is the other side.

Enough about the battleground and the opposition, and now to the imminent war of narratives that the BJP must brace itself for until 2024, starting with the first test in the elections of Uttar Pradesh in 2022.

The two toolkits, one on the farm laws, and the other on the handling of the Covid-19 pandemic offer enough hints for the sinister agendas in the making and there are some important lessons to learn for the party.

Firstly, there is no threshold here for the other side.

If the other side can plan protests outside Indian consulates across the world, outside the offices of successful private enterprises, defend rampant arson and violence in the national capital on Republic Day, cultivate communal fault lines by attacking Kumbh Mela and celebrating Eid, they are treading a dangerous political line.

To further add, if they can attempt to weaken the federal structure by peddling narrative against one state (Gujarat, in this case), use images from cremation grounds and of dead bodies to demean the government, fear-monger against an indigenously made vaccine that can save lives, script riots around the visit of an American president, and so forth, there is clearly no limit to the extent they are willing to go to, unapologetically.

This is not the first toolkit, and definitely not the last, and the future toolkits, when they surface online, would be far more sinister and communally dangerous, as it shall be witnessed.

Two, every economic reform will be met with fierce resistance, and pawns would be made out of peasants who to take to the streets to veto every legislative action. The immediate response will be to the three farm reforms, and once the dust from the second wave settles, BJP should be prepared for larger gatherings at Singhu, Tikri, and Ghazipur, especially in the run-up to the 2022 Uttar Pradesh elections.

The farmers will also find the support of labourers, as the government tries to push for modern labour reforms to enable the ease of doing business.

Every attempt to derail every economic reform, by street veto or through like-minded media, will be made by the other side.

Three, the political narrative will be vicious and will employ the communal fault lines to trigger an event that may be a magnified version of the Delhi riots of 2020 (hopefully, not).

Already, the anti-CAA narrative has been used to malign the government’s stand on minorities in the country, as an example.

To add to the chaos, the prospects of National Registration of Citizens (NRC), the construction and completion of the Ram Mandir, Yogi Adityanath’s unapologetic political image of a proud and pious Hindu, amongst many other aspects, would be used to further the polarisation, minority appeasement, and hence the votes.

Four, even on the social welfare front, the stellar work done across the country will be challenged with the idea of a direct cash transfer.

The other side would somehow look to sell the idea of a basic income for the unemployed, as a recent letter by the Congress stated, or similar to the NYAY (Nyuntam Aay Yojana) programme from 2019 where 5 crore families or/and 25 crore people were guaranteed an annual cash transfer of Rs 72,000.

The objective would be straightforward — to undermine the importance of initiatives related to toilets, houses, gas cylinders, cleanliness, electricity and water connections, and direct benefit transfers by selling the idea of a fixed income each month. Fiscally feasible and sustainable or not, this is the narrative the party will have to battle heading into 2024.

Lastly, as mentioned in the pandemic toolkit, an all-out attack would be choreographed to tarnish India’s image across the world. This would be done, primarily, in two ways.

One, by attacking India’s institutions in both domestic and international publications and platforms. The recent interview of Congress leader Rahul Gandhi to Nicholas Burns, Professor of Practice of Diplomacy and International Politics at Harvard’s John F Kennedy School of Government, is one of the examples of how the narrative will be peddled.

This narrative will serve as a foundation to dismiss the mandate of a potential NDA 3.0 post-2024 via street veto or foreign interference, similar to what we witnessed during the Singhu protests.

The publications will also be used to portray a poor image of India’s democracy. Expect all permutations and combinations of phrases like ‘Modi is Hitler ‘ and ‘Democracy is dying’. Even the toolkit mentioned the idea of employing foreign journalists to tarnish the image of the government and the country.

The good news for the BJP is that they are still two years away before campaigning for the national elections begins. Therefore, there is enough time to tinker with the communication strategy, but there are a few ideas the party can consider.

One, the idea of daily press briefings. Fake news or counter to any narrative will not wait for the next scheduled briefing from a cabinet minister, a correction on Twitter by the government, a release on the website of the Press Information Bureau, or the next election rally of Narendra Modi.

In a country of a billion Internet users, every digital bit of data and every second count, and therefore, it is imperative that the government adopts the idea of daily press briefings.

A cue must be taken from Aaron Sorkins’ The West Wing. One of the characters in the show, C J Cregg, the White House press secretary, is what the party needs right now.

A daily briefing not only helps to debunk the myths and misconceptions before they spread like wildfire digitally but also helps the government gauge the perception of the country better.

Better, the briefing must be done twice. One in the morning, and another at primetime. Efforts must be made to ensure linguistic access for all.

Two, the party’s strategy on social media needs to evolve. There are social media voids that the government needs to fill, especially on Instagram and YouTube.

Three, the party needs a different strategy for television. The spokespersons cannot be channel hoppers, and what the party needs is communication professionals. The idea should be to throw data and facts and not hide behind redundant rhetoric.

Of course, the response will have to evolve with the narrative and the shape it takes, but certainly, for the BJP, it will only get worse if the current trajectory of communication is maintained.

Already, there is growing frustration amongst the voters and the backers of the BJP, both in India and abroad, for the party’s delayed response to narratives pertaining to CAA, farmer protests, and more recently the management of Covid-19.

The work done on the ground, across villages, towns, and cities, and on the diplomatic front must be complemented with a stellar communication strategy that is not merely responsive or reactive, for a political winter is coming.