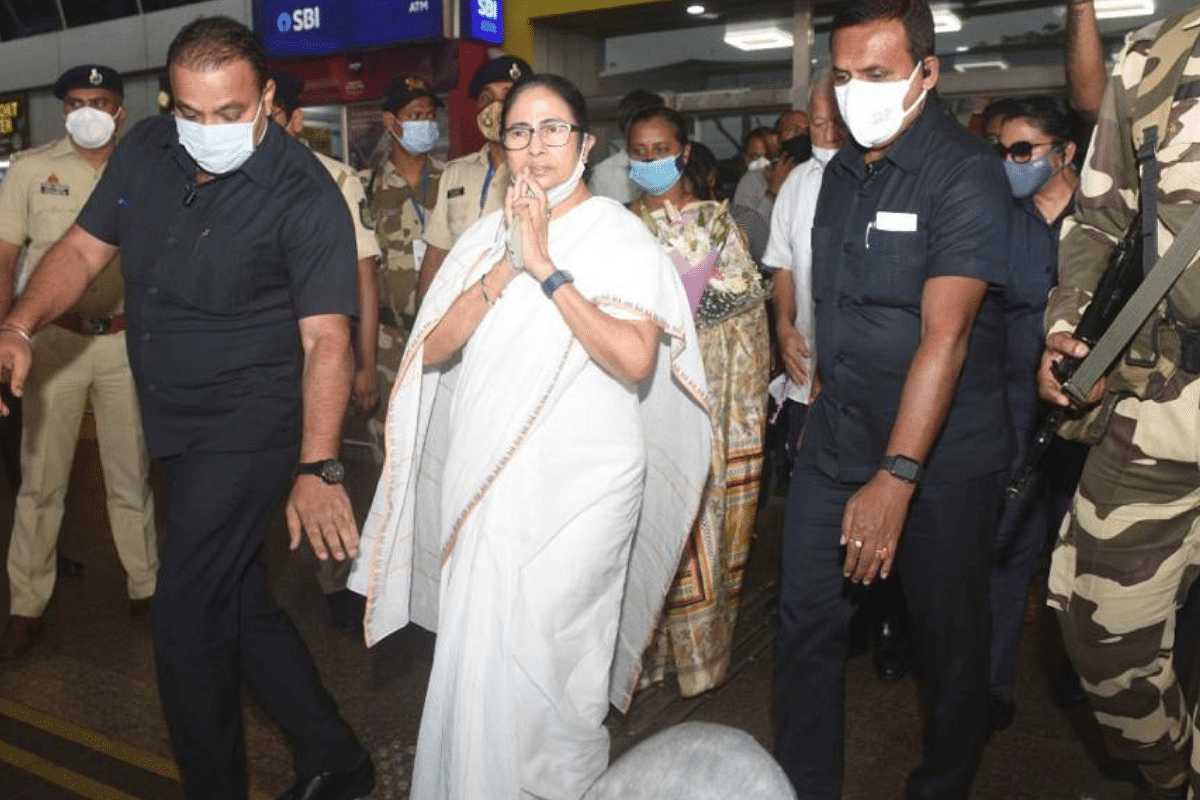 Trinamool Congress chief Mamata Banerjee’s ambitious bid to expand her party’s footprint beyond Bengal has taken her on a three-day trip to Goa.

The Trinamool has pinned its hopes in Goa on former chief minister Luizinho Faleiro, whom it inducted into the party at the end of September.

Faleiro, along with some politicians past their prime, defected from the Congress to the Trinamool.

The party has also inducted former footballers, writers, artists and others into the party.

Banerjee, after landing in Goa Thursday evening (28 October), will meet with academics, writers, political analysts, doctors, and professionals as well as sportspersons and politicians over the next two days before flying out of the state on Saturday (30 October).

The Trinamool chief's visit and the series of interactions she has lined up are aimed at getting a deep insight into the political psyche of Goa and helping her craft a strategy for the assembly polls due in the state early next year.

Even as she spearheads her party’s outreach in Goa as well as Tripura, the Trinamool chief’s flagship health insurance scheme that she leveraged to return to power for the third time with a massive majority is slowly unravelling in Bengal.

The much-hyped "Swasthya Sathi" health insurance scheme that she launched in December 2016 has attracted a lot of flak from doctors, public health policy experts, and managements of private hospitals, primarily because of the low rates of consultation and treatment under the insurance scheme.

Almost all private hospitals and nursing homes (as well as government hospitals) have been empanelled under the state scheme that provides basic health cover for secondary and tertiary care up to Rs 5 lakh per annum per family.

Most of them, however, have been arm-twisted into signing up for the scheme that makes it mandatory for them to admit and treat Swastha Sahi card holders at unsustainable rates.

The rates for doctor consultation, hospitalisation, surgeries, and other treatments prescribed under the state scheme are just a fraction of what private hospitals charge their patients.

Private hospitals have been pleading for an upward revision of the rates by at least 75 per cent, but to no avail. The cash-strapped state government just doesn’t have enough money in its coffers for such an upward revision.

The private hospitals, as has been widely reported, have reserved only a small number of beds for Swasthya Sathi patients because admitting all beneficiaries of the state scheme who may seek treatment at private hospitals would make them incur huge losses.

“If we are to admit all Swasthya Sathi card holders who seek admission, we will end up with at least one-third to one-half of our beds being occupied by them. That will make our operations completely unviable and we will have to close down then,” the chief executive officer of a top private healthcare provider in Kolkata told Swarajya.

The reluctance of private hospitals, especially the premier ones, to admit or treat more than a small number of Swasthya Sathi patients defeats the very purpose of the universal health insurance scheme.

An overwhelming majority of Swasthya Sathi card holders are, thus, forced to seek treatment in government hospitals where the quality of healthcare is poor and where they would have anyway received free treatment.

Many doctors, especially the senior ones, are reluctant to examine Swasthya Sathi patients admitted in private hospitals they are associated with. “The upper limit of doctors’ consultation fee prescribed under the state scheme is very low. As a result, only junior doctors and house staff examine Swasthya Sathi patients,” revealed a director of a major private healthcare company that runs a couple of facilities in Kolkata.

Swasthya Sathi, said Dubey, would have worked had the prescribed rates of treatment been realistic and in sync with what is charged by the top private hospitals.

“Private hospitals and nursing homes have to be first categorised according to the facilities they offer. The rates of treatment have to be structured in accordance with those categories of hospitals. A public health insurance scheme will work for the beneficiaries only if it is a win-win situation for all stakeholders. Low and unrealistic rates of treatment lead to the sort of reluctance on the part of private hospitals that we are witnessing in Bengal,” Dubey said.

WBCERC chairman Justice (retired) Ashim Kumar Banerjee has gone on record saying there would be “zero tolerance” of refusals by private hospitals. Proceedings have been drawn up against seven private hospitals for refusing to treat Swasthya Sathi patients and the hearings will be held shortly, he said.

But private hospitals who run the unacceptable risk of incurring huge losses if they have to adhere to the state government’s diktat are unlikely to heed the Commission’s warning.

What’s more, most private hospitals have not been reimbursed for treating Swasthya Sathi patients for the last few months.

Repeated requests by private hospitals to the state health department to release their dues have fallen on deaf ears. That’s because the state doesn’t have the funds to clear these outstanding dues.

Banerjee has taken the state deep into the red with her populism and an inability to get investments, especially big-ticket investments, due to her anti-industry image, her whimsical ways, and her poor governance skills. The state is in a financial crisis and caught in a debt trap.

Bengal’s total outstanding debt is Rs 4.9 lakh crore, more than double the total public debt in 2011 (when the Trinamool came to power in Bengal). That means Banerjee has pulled the state deeper into debt, and that is why it does not have the funds to pay private hospitals their dues.

This inability to pay the private hospitals their Swasthya Sathi dues has also led many of them to flatly refuse treatment to patients covered by the scheme. Even non-profit hospitals are finding it difficult to offer treatment and admission to Swasthya Sathi patients because of it.

Sanjiban Hospital, a 500-bed private not-for-profit facility in Howrah, has recently taken the state government to court (read this) for non-payment of dues. The state government owes this hospital a huge amount for treating nearly 6,000 Covid-19-positive patients since the pandemic struck last year.

Some other private hospitals that are facing an uncertain future are also mulling legal remedies. “Our only hope now is judicial intervention. Let everything come out in the open and then people will realise why we have been refusing treatment to Swasthya Sathi patients,” said the director of the private healthcare company.

Banerjee may have won a landslide victory in the assembly elections in Bengal a few months ago, but a primary driver of that win is slowly falling to pieces in Bengal.

Goa’s electorate would do well to examine the reasons behind the unravelling of the Swasthya Sathi scheme in Bengal.

The impending failure of Banerjee’s pet Swasthya Sathi scheme in Bengal is also reflective of the deep flaws in the Trinamool chief’s populist policies that render such policies and her many schemes ultimately unviable.

It is something that the people of Goa need to be aware, and wary, of.