Man With 10 Prior Police Cases Held For Killing Dalit Youth Who Kept Pleading, ‘Let Me Go, My Mother Is Waiting For Me’ 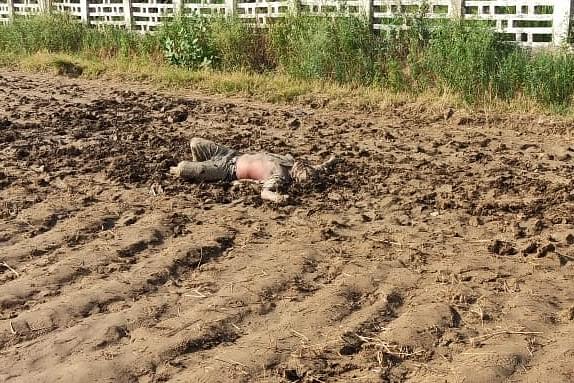 Body of Vivek Kumar on 1 June in Matiyala village of Masuri area in Ghaziabad, UP.

A 25-year-old man from Uttar Pradesh’s Ghaziabad district was found murdered two weeks ago on his way home from work. The family initially suspected his colleagues to be behind the murder.

The Ghaziabad Police have finally cracked the case and found that it wasn’t the deceased’s colleagues but three goons with a criminal history who killed him, over a trivial issue.

The three accused have been identified as Mohammad Adil, Mohammad Mohsin and Mohammad Salman. The three have confessed to the murder, Neeraj Jadaun, Superintendent of Police (SP) at Ghaziabad (rural), told Swarajya.

Mohsin already has at least 10 cases registered against him for mobile theft and animal cruelty at various Ghaziabad police stations, Jadaun said.

The deceased, Vivek Kumar Jaatav, belonged to Scheduled Caste (SC) community and worked as a lineman at the electricity board office in Ghaziabad’s Bapu Dham area.

The police reached the murderers through their tracker dog, Leena. As a reward to her, the police have decided to give her a new leather strap and a velvet bed.

Vivek’s father Rajendra Kumar told this correspondent, “Of my three sons, I had the biggest hopes pinned on this boy. As a child, we sent him to his bua [aunt] in Delhi so he can make something of himself. He received the best education of all my children.”

“Now when he had started living with us and was trying to improve the status of our family, he is gone,” Rajendra, who works as a labourer in fields, said.

Vivek was the second of Rajendra’s three sons, who also have a sister. Vivek was unmarried.

Rajendra, a resident of village Kushaliya in Masuri area of Ghaziabad, found his son’s body on the afternoon of 1 June. It was lying in a field in Matiyala village, some five kilometres away. Vivek had been missing since the night before.

Around 8.30 pm on 31 May, Vivek had called up his colleague Mohammad Jabbar to inform him of a minor accident he had had with a vehicle in Matiyala village. Vivek’s phone was switched off soon after that.

In his complaint to the Masuri Police Station, Rajendra named Jabbar, along with three other colleagues namely Lokesh, Anil Chandrabhan, as suspects. “They all held a grudge against my son,” the statement by Rajendra, recorded in the FIR (number 311/2020), says.

While the police was probing this angle, their tracker dog helped solve the case.

“From the spot where the body was found, Leena started running in a direction and stopped only some 1.5 kilometres away. She stopped in front of a house. We eventually found the house resident to be one of the murderers based on several pieces of evidence,” said Jadaun.

He narrated what unfolded on 31 May, based on confessions by the accused:

Vivek’s bike brushed against a four-wheeler in which the three accused were travelling. Vivek slipped and fell and immediately called up his colleague Jabbar to inform him. The accused snatched his phone and started running to an area behind a cremation ground. Vivek followed them. There, the three thrashed him, pinned him to the ground and strangled him to death using a belt.

“The accused told us that Vivek kept on pleading with them to let him go, saying that his mother was waiting for him. But the three men did not relent and stopped only when he had died. They also said that they planned to bury his body in the ground, but somehow could not do so. They dumped the body there and left,” said Jadaun.

In a video statement, Ghaziabad Senior Superitendent of Police (SSP) Kalanidhi Naithani said that he has decided to award the investigation team with Rs 10,000 along with a new leather belt and velvet bed for their dog Leena.