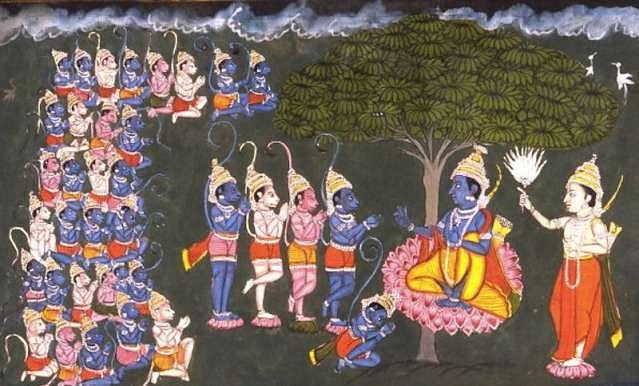 Ram Navami, the birthday of Lord Rama, was celebrated enthusiastically by lakhs of people across Bengal on Sunday (25 March). And as they marched with saffron dhwajas raising ‘Jai Shree Ram’ slogans in every nook and corner of the state, they ground to dust the mischievous, false and divisive narrative that had been peddled for some years now by the pseudo-secular intellectuals belonging to the left-liberal cabal that Bhagwan Rama is not revered by Bengali Hindus.

For the past few years, coinciding with the rise of Hindu consciousness in Bengal, Left-leaning litterateurs, artistes, academics and self-proclaimed intellectuals - most of them unabashedly migrated to the Trinamool camp when the red bastion in Bengal started crumbling - started a false narrative that Rama was never revered and worshipped by Bengali Hindus. Rama, they said, did not figure in the pantheon of gods worshipped by Bengalis. They also spun the untruth that many rituals associated with Hindu religious festivals like Navratri, Dussehra, Diwali and Holi that were observed by Hindus in North and West India were alien to Bengali Hindus.

By peddling such a blatantly false narrative, these fake intellectuals tried to create a divide between Bengali Hindus and their co-religionists in other parts of the country. This narrative fits in perfectly with another that had been successfully peddled by the Left for some decades now: that Bengali Hindus were essentially ‘tolerant’ and ‘secular’ and had co-existed peacefully with Bengali Muslims for centuries, unlike Hindus in the other parts of the country. Rabindranath Tagore and Kazi Nazrul Islam were held up as the prominent examples of this so-called syncretic culture. To establish this false theory, history was whitewashed and the many dark chapters of Hindu-Muslim conflict like the great Calcutta killings and the many gory conflicts between the two communities who share the same tongue before and after those killings were sought to be erased from public memory.

An essential part of this false narrative-building exercise was to take away or downplay the religiosity of Hindu festivals. Durga Puja thus became Sharad Utsav (Sharad being autumn), and the puja and religious aspect of Hindu festivals was cleverly relegated to the background while they were promoted as social occasions where participation of all communities was encouraged. Simultaneously, Hindu deities, religious texts and purohits (Brahmins) were mocked and ridiculed in Bengali books, poems and movies and, gradually, Hindus in Bengal were subtly brainwashed over decades to become very defensive of their religion and subdue their religiosity. The spread of toxic communist ideology among a large section of Bengali Hindus (the communists were never successful in indoctrinating Muslims and the ones they could brainwash never stopped going to the masjid anyway) further alienated the Bengali Hindu from his or her religion.

This was grand communist plot, but the Congress collaborated actively in it. The Trinamool later appropriated it for its own political gains. The whole narrative, with its numerous sub-texts, was created to make Bengali Hindus believe that they are fundamentally different from their co-religionists in the rest of the country and, thus, keep the Bharatiya Janata Party or BJP (and its affiliates) away from Bengal. The communists and the Congress rightly predicted that given the long history of persecution of Bengali Hindus by Muslims and the atrocities the former have been subjected to down the ages, Bengal would be an easy harvest for the BJP. They succeeded in their nefarious design for many decades but, as they say, it is impossible to fool all the people forever.

Sunday’s numerous Ram Navami processions marked the beginning of the burial of the false narrative that the Congress-communist cabal of intellectuals have been peddling for such a long time now. Sunday proved that Lord Rama is as revered in Bengal as he is in Ayodhya or any other part of the country. The insidious voices of those who propagate otherwise were totally drowned by the full-throated ‘Jai Shree Ram’ slogans that reverberated throughout Bengal on Sunday.