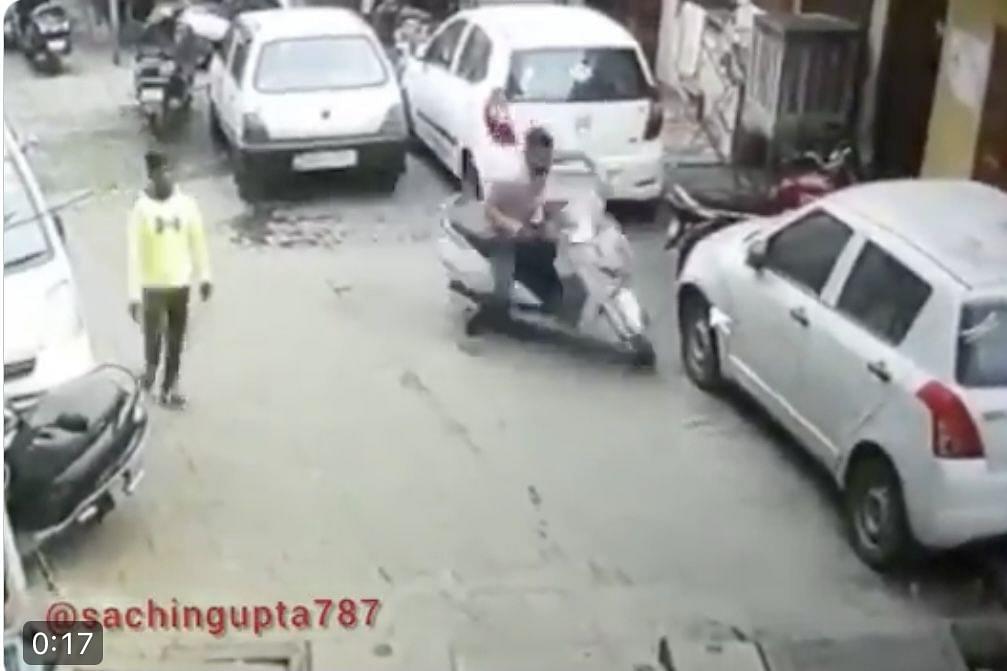 A still from the CCTV footage of the theft.

A rather strange case has been filed at a police station in western Uttar Pradesh’s Meerut district – that of theft of a girl’s undergarments.

A man, Sanjay Choudhary, filed a complaint to Sadar Bazaar Police Station on 14 March, saying he has recorded a video of two men stealing his minor daughter’s underwear drying outside his house. The police booked unidentified men under IPC sections 379 (theft) and 509 (gesture made to outrage modesty of a woman).

After preliminary investigation, the police have arrested a man named Mohammed Romin while hunt for his accomplice Mohammed Assak is on.

As per the complaint in the FIR (number 42/2021), the incident happened on 12 March around 4 pm. The two Muslim men alighted from a two-wheeler outside Choudhary’s house.

One of them wore a cap and went inside a mosque while the other man stole the undergarments drying outside the house and put them in his vehicle.

The incident has been captured on a CCTV camera, the complaint says.

The footage has been shared by journalists on social media as well.

The complaint said that the act has brought shame to the family.

This correspondent spoke to Choudhary over the phone on 15 March. He said he was on his way to the police station and expected to be free only in the evening. He managed to talk for about 10 minutes, where he said that he suspected occult practice to be behind the theft.

It’s widely believed that occult practitioners use a woman’s undergarments to ‘trap’ her. This kind of dark practice is called ‘vashikaran’.

This correspondent reported last year that a woman named Ekta Jaswal from Punjab’s Ludhiana district eloped with a man from Meerut, Mohammad Sadiq, only to be looted and killed a few days later by Sadiq and his family. The family said that Sadiq was into occult practice and had ‘trapped’ Ekta. The Meerut Police had confirmed that Sadiq indeed worked closely with an occult practitioner.

In the latest Meerut case, market association head of Sadar Bazaar Sunil Dua has been quoted by Aaj Tak as giving a similar theory.

Choudhary told this correspondent that his first reaction to the theft too pointed to occult practice. He said that he, however, has been told by a relative of Romin that Romin carried out the act as part of a playful challenge thrown at him by his friends.

“Madam, what can I say about the motive? Tantra-mantra is what I believe is the motive. Let the police investigate the matter now,” he said.

Choudhary says that there is a backstory to the case.

There is a place of gathering for Muslims in the colony he lives, which has mixed population. He says that every Friday (12 March was a Friday), scores of Muslim men gather in his colony for mass prayers. They stay on long after the prayers.

“They indulge in nefarious activities like stealing and teasing our [Hindu] women. Some months ago, they stole a motorcycle parked outside our houses. On another occasion, a lock went missing. No matter how much we complain, there is no stop to these gatherings,” he said.

“We just lock our houses and stay inside on Friday evenings.”

Choudhary says he was forced to file a police case for the sake of his minor daughter. “She had watched the theft and even screamed at the men from the window. She felt insulted. I could not afford to keep mum. I had to file a case for her sake,” he said.

Choudhary says his tensions, however, have increased after the case. “Madam, the police have invoked minor charges. The men will get bail in no time. They would not take it lightly. I am very worried,” he says.

The father said that after he retrieved the CCTV footage on 13 March, he went around asking the local Muslims if they identified the culprits. Relying on the version of one of elderly men, he named one of the suspects as ‘Kabir’.

“The man who has been arrested has a different name. But then, maybe one of the two men keep Kabir as a second name,” he said.

“You know how it is – they keep an additional name that doesn’t sound like a Muslim name, in order to trap our daughters,” said Choudhary, before requesting to hang up so he can proceed to the police station.