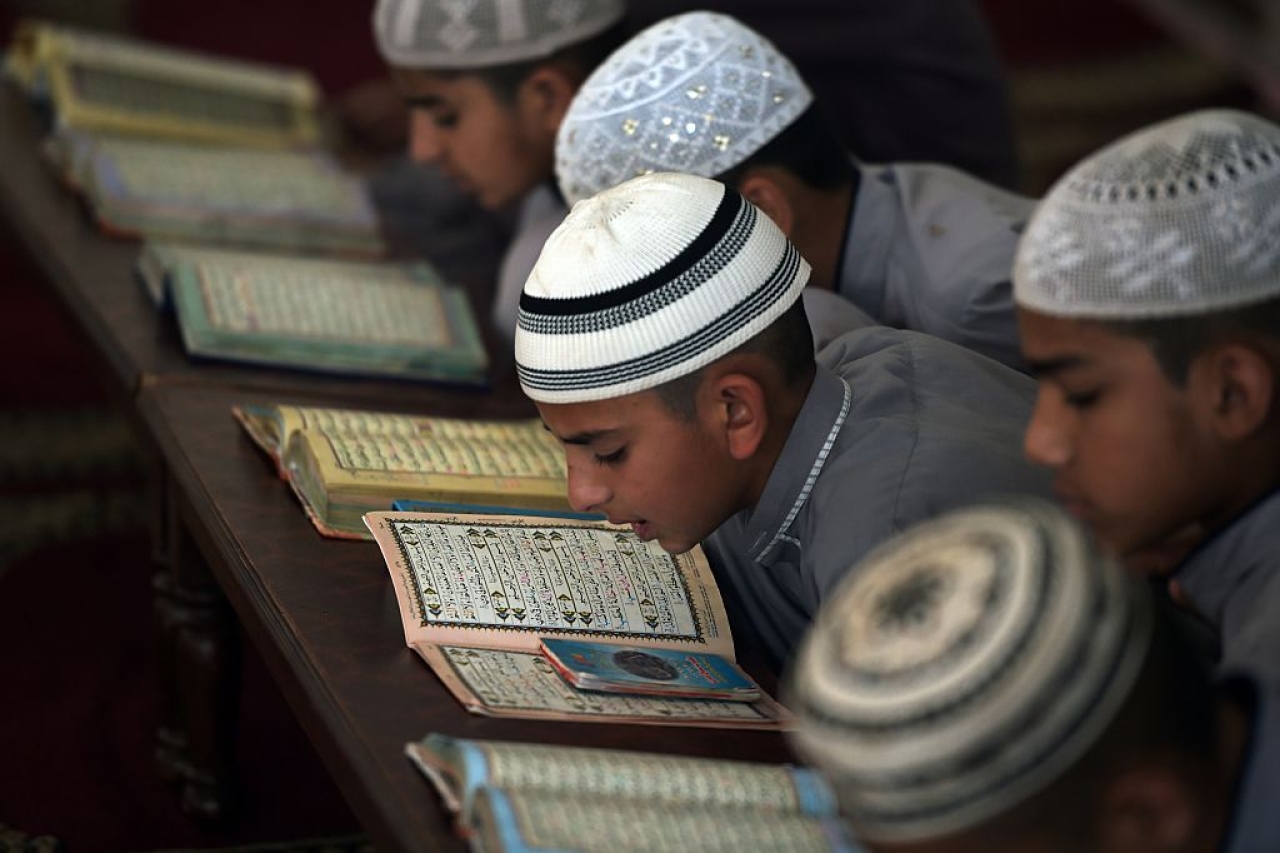 Students of a madrassa. [AAMIR QURESHI/AFP/GettyImages]

The arrest of the emir (chief) of the India operations of Jamaat-ul-Mujahideen Bangladesh (JMB), Taufeeq Raza alias Ejaz Ahmed, earlier this week has once again brought to the fore the fact that Bengal has become a breeding ground for Islamist terrorists. And, also, a safe haven for fugitive Islamists from Bangladesh.

The spread of the hardline and regressive Wahhabi Islam in Bengal, especially in the poverty-stricken rural areas populated by illegal settlers from Bangladesh, has led to radicalisation of young men who have joined the JMB and its Indian affiliate, the Jamaat-ul-Mujahideen India (JMI).

The JMI was launched in February last year.

After the JMB went on a killing spree in Bangladesh, publicly slaying secularists, lawyers, judges and others, the Sheikh Hasina government launched a crackdown on the outfit. Its top leaders were arrested and executed, and many of the outfit’s senior functionaries slipped into Bengal through the porous India-Bangladesh border.

Actually, JMB cadres and leaders started finding safe havens in Bengal ever since the outfit was banned in Bangladesh in 2005 following the serial bombings it had carried out there.

JMB terrorists fleeing Bangladesh have taken advantage of appeasement policies of the communist and then the Trinamool governments and settled down in Bengal. With Bengal’s ruling politicians keen on appeasing minorities, the state administration turned a blind eye to their activities.

A number of Wahhabi clerics who came under the scanner of the Sheikh Hasina government in Bangladesh also fled that country and have settled down in Bengal.

One good example of a Bangladeshi fugitive finding shelter in Bengal and then spreading the terror network in the rest of the country is Mohammed Jahidul Islam, who was ultimately arrested by the National Investigation Agency (NIA) from the outskirts of Bengaluru in early August last year.

Islam, known popularly as ‘Boma Miyan’ due to his expertise in making bombs, was arrested in Bangladesh for the 2005 serial bomb blasts in that country and sentenced to 25 years in prison. But he escaped from prison in 2014 and entered Bengal.

Islam, a native of Shakerbira in Bangladesh’s Jamalpur district, took refuge in Elisabad village of Bengal’s Murshidabad district. He fraudulently procured Indian citizenship documents from there and then went to Bengaluru to recruit radicalised Muslim youths into the JMB and JMI.

He was the deputy chief of the JMB, and the head of its India operations. Muslim men from Bengal working in menial jobs in South India were his prime targets for recruitment into the JMB.

“The spread of radical Wahhabism in Bengal was well-known in intelligence circles, but was being derisively dismissed for political reasons by Bengal’s ruling politicians. It came out in the open with the Burdwan bomb blast on 2 October 2014. The blast occurred at the rented premises of two JMB operatives, but the Trinamool government obstructed a probe by the NIA (Mamata Banerjee had blamed RAW for the blast!) and tried to even shield some of the accused,” said an IB officer.

Since then, the NIA as well as the Bengal Police have tracked down and arrested many JMB and JMI operatives.

The latest arrest of Taufeeq Raza, who was nabbed by the Kolkata Police’s Special Cell from Gaya in Bihar, comes after sustained interrogation of four Nobo-JMB (an offshoot of the JMB, but they owe allegiance to the Islamic State while the JMB is allied to the Al Qaeda) who were arrested from the vicinity of Howrah railway station in Kolkata in end-June. Three of these four were Bangladeshi nationals and one was involved in the Khagragarh blast.

Raza (the JMB operative arrested earlier this week from Gaya) hails from Panrui area of Bengal’s Birbhum district. This 30-year-old is a product of a Wahhabi madrassa run by hardline clerics and an example of the dangerous spread of radical Islam in Bengal.

Raza’s grandparents and parents entered Bengal illegally from Bangladesh when he was an infant and were given shelter by a few relatives in Malda, from where they shifted to Birbhum and made a living as agricultural labourers. He was sent to a local madrassa and schooled in Wahhabi Islam.

Raza was recruited into the JMB when he was 19, rose through the ranks and was put in charge of the terror outfit’s India operations after Jahidul Islam (‘Boma Miyan’) was arrested a year ago.

He had visited Bangladesh a few times to meet JMB leaders there and has made a number of trips to Jharkhand, Kerala and Karnataka to recruit young and radicalised Muslim men into the JMI.

According to central intelligence agencies, a huge number of unregistered madrassas funded by fat donations from the Middle-East, primarily Saudi Arabia, have come up in rural Bengal. All these preach Wahhabism.

Repeated requests from the Ministry of Home Affairs to the Bengal government to regulate these madrassas and shut down mosques that spread Wahhabi Islam have fallen on deaf ears.

It is only in the past couple of years, after repeated prodding, that the Bengal Police have become pro-active and are investigating Islamists with their roots in Bengal.

But Intelligence Bureau officers warn that until the source of this threat — the Wahhabi madrassas and masjids — is tackled very strongly, the Bengal Police's actions amount to superficial treatment of the symptoms rather than the disease.

Get Swarajya in your inbox everyday. Subscribe here.
Tags:
341 Shares