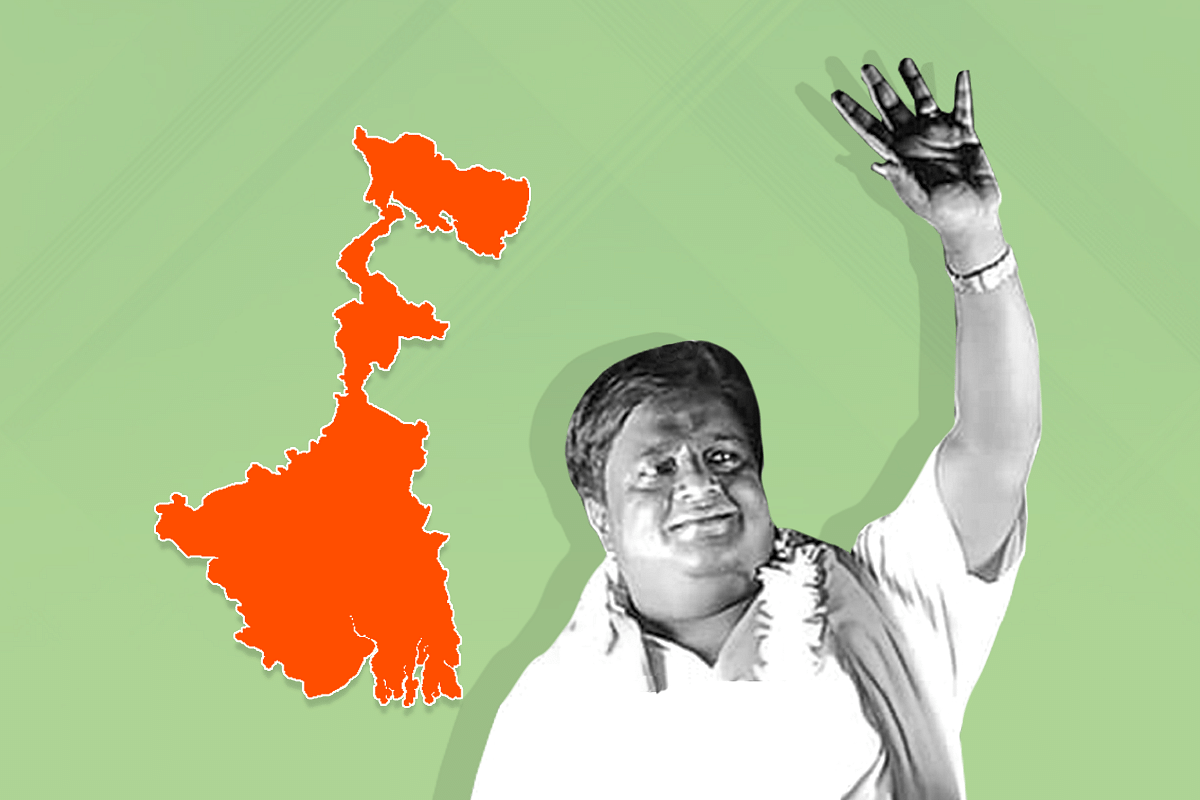 He has ‘rescued’ countless Hindu girls who were victims of religion-based exploitation, organised reconversion of many Muslims and Christians to Sanatana Dharma and has stood by persecuted and wronged Hindus of not only Bengal, but elsewhere in the country.

Over the past two months, he has been at the forefront of providing financial help and succour to hundreds of Bharatiya Janata Party (BJP) workers and supporters who have been driven out of their homes by alleged Trinamool goons and has arranged safe shelters for many of them.

Meet 41-year-old Devdutta Maji, the president of SinghaBahini, a Hindutva outfit formed in July-August 2018. This braveheart had fearlessly and fiercely battled the Communist Party of India-Marxist or CPI(M)-led Left Front government and, over the past 10 years, the Mamata Banerjee government that has gained notoriety for its appeasement of Islamists.

The appeasement of Islamists by the current ruling dispensation in Bengal has had the direct impact of muscle-flexing by many Muslim strongmen and, consequently, attacks on Hindus.

Since 2009, Maji has been at the forefront of not only coming to the aid of many persecuted Hindus of Bengal, but also organising them to resist the recurrent unprovoked attacks on them.

The seeds of Maji’s turn towards becoming a ‘Hindu warrior’ were sown during a horrific assault he witnessed as a 12-year-old boy in December 1992.

He has vivid memories of that incident: “It was in the aftermath of the demolition of the Babri Masjid and there was a total shutdown in Kolkata. As during such shutdowns, a few of us youngsters went out on the main road (A J C Bose Road) to play cricket. We saw a huge crowd of sword-wielding Muslims approaching and just then, a Maruti van with some people in it came on the main road.

“The crowd stopped the van, pulled out the driver and another passenger and started hacking them with swords. It was a ghastly sight. A neighbour hurriedly rounded us up and took us inside to safety,” recalls Maji.

That incident was a turning point in his life. “The brutal, cold-blooded killing of those two just because they happened to be Hindus awakened something in me and made me resolve to fight such injustices against Hindus,” Maji told Swarajya.

After passing out of the prestigious Calcutta Boys School and completing his graduation, Maji got into his family business. But the spark of Hindutva was very much alive in him and in 2009, he joined the Hindu Samhati just a year after its formation in 2008.

Within a year of joining the Hindu Samhati, which was founded and headed by the firebrand Tapan Ghosh, Maji found himself in the thick of action during the communal riots in Deganga in North 24 Parganas.

Muslim mobs had attacked Hindu homes and shops, desecrated mandirs and molested women. Maji played a key role in providing relief and also emotional succour to the affected Hindu families, and also in motivating and organising them to resist future attacks.

The Hindu Samhati staged a massive demonstration at the (North 24 Parganas) district headquarters at Barasat a few days after the riots. But this peaceful protest was attacked by Muslims as a result of which clashes erupted.

The police arrested five office-bearers of the Hindu Samhati and they could get bail only on the eve of Durga Puja (in mid-October) after nearly a month in custody.

“There was a lot of pressure on Tapan Ghosh from the family members of those arrested over their long incarceration. Many, including the secretary (of Hindu Samhati) eventually resigned. There was an organisational crisis and Ghosh appointed me as the vice-president of Hindu Samhati on 10 October that year,” said Maji.

As vice president of the organisation and a close lieutenant of Ghosh, Maji organised a number of programmes to create awareness among Hindus and also to provide relief to Hindus affected by communal riots.

One of the most prominent cases he was involved in was that of Tuktuki Mondal, a 14-year-old Hindu girl who was allegedly abducted by a Muslim and kept in confinement. The Bengal Police were accused of siding with the family of the accused who had strong links with the ruling Trinamool Congress.

Maji was instrumental in organising protests, running a successful media campaign and getting the National Commission for Women (NCW) to investigate. He was also instrumental in organising demonstrations demanding the safe return of the minor girl in seven other countries; Chief Minister Mamata Banerjee faced angry demonstrations when she visited London in July that year.

The girl surfaced dramatically when the NCW team visited Bengal. She had been converted to Islam and Maji arranged psychological counselling for her, organised a safe shelter for her and oversaw her ghar wapsi. Maji also took up responsibility for the education of Tuktuki’s sister.

During the 2016 Dhulagarh riots, Maji was at the forefront of providing relief to the Hindu families whose houses and shops were looted and destroyed. He also organised financial assistance to them for resettlement and to enable them to resume their businesses.

Maji was again in the thick of action after the communal riots in Baduria in 2017. He organised legal aid for the two Hindu boys whose social media posts allegedly triggered the riots and after they got bail, he provided them shelter. He gifted them laptops and sponsored their education.

Maji developed serious differences with Hindu Samhati over time and ultimately in July 2018, he quit the organisation to set up the SinghaBahini.

During the Diamond Harbour riots before the 2019 Lok Sabha elections, hundreds of Hindus fled their homes (read this). Maji was again instrumental in arranging safe shelters for them and arranging for clothes, food and other commodities for them.

The SinghaBahini chief also helped in the subsequent resettlement of these Hindu families.

In June 2019, clashes broke out between tribals and Muslims at Kishanganj in Bihar. The Bihar Police arrested 21 tribals and Maji rushed to their rescue, providing legal aid to them to secure bail, paid their bail amount and also provided food and relief to the families of the arrested.

He was one of the first to reach out to the family of Kamlesh Tiwari who was murdered by Islamists in Lucknow in October 2019. “I raised Rs 60 lakh for his family from my friends and supporters (both Indians and NRIs) over a period of time,” said Maji.

But he has been doing a lot of other work for the Hindu community as well. One of his pet projects is the training that he organises for non-Brahmin ladies to become purohits (priests).

“I started this programme in 2018-19 at my native Mahakalati village in Amta sub-division of Howrah district. About 30 ladies have been trained so far and they have conducted Durga, Saraswati and Lakshmi pujas, shraddh ceremonies etc. Some of them are scheduled to travel to Sri Lanka and Singapore this year to conduct Durga pujas there,” Maji told Swarajya.

SinghaBahini distributed 13 lakh units of food packets during the pandemic-induced lockdown last year, provided a lot of relief in the aftermath of Cyclone Amphan last year and has been distributing cooked food to hundreds of poor families in many parts of the state this time too.

Maji has been successful in rescuing about 800 Hindu girls who had been victims of what is termed as ‘love jihad’ and in organising their ghar wapsi. He has arranged for the reconversion of a few Muslim young men and families to Sanatana Dharma also. “These girls and their families have to be protected and the girls have to be rehabilitated also,” said Maji.

It is not the above, but Maji’s role in standing beside BJP workers and supporters and their families who have been at the receiving end of Trinamool’s hooliganism and brutal attacks that has singled him out as a ‘Bahubali’.

Maji was nominated by the BJP as its candidate for the prestigious Chowringhee Assembly constituency in Kolkata. Though he lost, he secured a respectable 22 per cent vote share and came second, not a bad performance for a debutant pitted against veteran politicians. After the announcement of the results on 2 May when most BJP leaders had retreated to the safety of their homes or had even gone out of the state, it was Maji and a few others like him who provided succour to persecuted party workers and their families.

He has arranged for safe shelters for about 800 persons at various places, including his central Kolkata residence, since then. Even now, 24 young men and some families who have not been able to return to their homes are staying at his house.

Maji had given, and is still providing, financial assistance to many families whose houses and shops have been ransacked and looted by alleed Trinamool gangsters.

He has also boosted the morale of party workers and supporters and organised them into resisting and repulsing the Trinamool’s attacks at many places. Maji personally oversaw the ‘reopening’ of BJP party offices which had been forcibly shut by Trinamool goons at many places.

It is because of this exemplary courage that he displays, and his firm commitment to Dharma and Hindutva, that Maji is looked upon as a ‘Bahubali’ by many. And deservedly so.