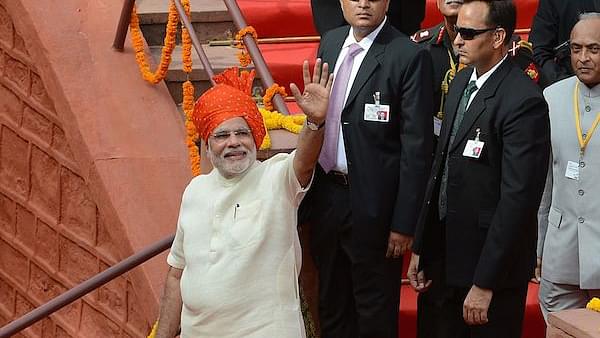 There is no doubt about it - Prime Minister Narendra Modi’s best Independence Day speech was his very first one two years ago. He was just months into the job, he didn’t have any baggage and he could only speak about what he planned to do and his vision for the country. It was not just Modi’s best but, perhaps, one of the best among all prime ministers in recent memory.

Modi’s second 15 August speech saw him a bit apologetic, a bit on the defensive as he trotted out his government’s achievements for the neglected sections and sectors and pointedly remained silent about industry.

But his third speech today was something even his oratorical skills couldn’t rescue.

Prime Ministers’ Independence Day speeches are meant to be self-congratulatory listings of the achievements of the government of the day. Barring Indira Gandhi’s and Modi’s speeches, most have been soporific, with only the expectation of some major policy announcement hidden in them - keeping only journalists awake and alert.

But Modi’s 90-minute-plus long recounting of every success from inflation control to foreign policy (packaged as a speech not about achievements but explanation of work culture) was not riveting at all - certainly a first for a Modi speech. There were the usual spiels about moving from symbolism to substance, isolated to integrated development and from entitlement to empowerment.

Some of this trumpet-blowing was perhaps necessary because Modi’s detractors are at pains to present a picture of India being taken back to the dark ages and completely obliterate positive vignettes that this government has managed to paint. Even so, this was not his last Independence Day speech - he still has two more to deliver - and so one would have expected a more forward-looking and agenda-setting speech.

And yet, some key themes stood out. There was the emphasis on moving from swaraj (independence) to su-raaj (good governance). But this, too, got reduced to a narration of key government initiatives. Faster printing of railway tickets, quicker income tax refunds and faster implementation of infrastructure projects are all about efficient governance. Efficient governance is just one part of good governance. Good governance is about the state responding to people’s unmet needs, about making people feel safe and secure and feel assured of a certain minimum quality of life. Financial inclusion through the Jan Dhan Yojana and the growing reach of direct benefit transfer of welfare payouts has certainly helped but there are a number of areas where the state continues to fail its citizens. Policing is one area that comes readily to mind.

This is not something Modi or the central government can do alone. States and local governments will have to come on board. If Modi had issued a clarion call for administrative and police reforms, it would have given his speech a definite edge. Perform, Reform and Transform is not possible without this.

Talking about how an invigorated India could not be possible through just economic growth, and required a reinvigorated society, that social justice is the foundation of such a society and that social evils have to be fought against was a powerful message in the light of the recent incidents involving cow vigilantes and Dalits. Modi did speak about how the chalta hai/hota hai attitude to social evils had to end, quoting Ramanujacharya speaking against caste discrimination. If social attitudes are deep-rooted, greater force is needed to uproot them, he very rightly said. He certainly was right in exhorting every citizen to fight this, because social evils cannot be merely legislated away. But citizens have to find support from the state machinery; that is why administrative and police reforms are important.

Can good governance be possible when the state’s energies are frittered away in too many areas? At one point, Modi lamented about the state interfering in areas where it should not and running away in areas where it should. But hopes that this could mean a re-ordering of government priorities were dashed to the ground when, minutes later, he spoke about how his government had reinvigorated the public sector and patted it on the back for the turnaround in the performance of three PSUs - Air India, BSNL and Shipping Corporation. If there are three areas where the government should no longer be, it is certainly the first two. This is a sure shot way of undermining su-raaj.

Modi said su-raaj of every institution of democracy does not live up to its responsibility. Could that be a message to the judiciary? But that message should also go to legislatures where often the first assault on su-raaj happens in the form of passage of bad laws.

Modi may have missed setting out how exactly he hopes to achieve su-raaj, but perhaps his actions till next year’s speech will give an indication.