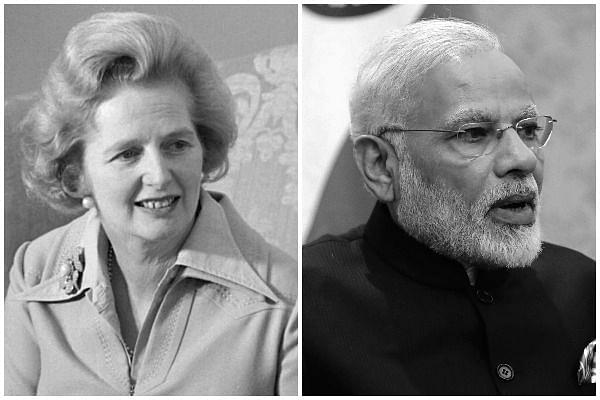 Now that the results are out and Prime Minister Narendra Modi has led the National Democratic Alliance (NDA) to a convincing victory, my mind races back to first re-election of Baroness Thatcher in summer of 1983 and the similarity in circumstances leading to re-election of both these conviction politicians.

Until about six months before the re-election, the establishment in UK was shocked by the rapid dismantling of the established social order. However, there was not enough to show in terms of employment and economic growth. Polls showed declining popularity for both leaders and the establishment was gleefully waiting for her to be despatched to oblivion.

Lot of her critics feel that Thatcher’s higher margin of victory in 1983 was possible only due to the Falklands war, which resulted after Argentina took over the small British isle of Falklands. She led from the front and dispatched the Task Force, matched her diplomacy with military might and gave the military full support and political air-cover to win a difficult war. Similarly, in the case of PM Modi, as he wins by a larger margin, his critics say that but for the Pulwama attack by Pakistan which led to the Balakot air strike, he would have lost the re-election.

But in both cases while the elite, especially in the media, had been condescending to the ‘grocer’s daughter’ and ‘chaiwala’, the common folks were thinking differently. In fact, these war-like situations cemented Thatcher and Modi’s positions as national icons and heroes.

The Falklands and the bravery of SAS/Paras in the Northern Ireland and other parts of the world (some overt and many covert) in case of Thatcher; and surgical strikes in Myanmar and Pakistan have endeared Modi and instilled national pride in the common folks. In both cases, the left liberal media looked upon it as jingoism and dangerous for the country. Both leaders would most likely have won their re-elections anyways based on their vision and record of delivery and of course both were lucky in the aspect of their opponents. Michael Foot for Thatcher (at least an intellectual although completely ineffectual) and ‘mahamilawat’ for Modi.

Both leaders came into office when their country’s reputation was in tatters, economy not doing very well and the country being held hostage to vested interests.

In the case of Maggie, it was the ultra-left wing and militant trade unions who made Britain the “sick man in Europe” with a three-day work week due to strikes; the country was also rocked by terrorism by the IRA. Taxation was at an extreme high of 80 per cent and the lowest rate of taxation was 33 per cent. All these hurt the national pride, and symbolised Britain’s descent into economic doldrums.

In Modi’s case, the challenges were similar. Foreign investors were worried about retroactive taxation, there was a small tax base and a sense of directionlessness in policy.

Both leaders were unlikely to be in office as prime ministers considering their backgrounds. In 1979, it was not the norm to have women MPs, let alone women as cabinet ministers or a prime minister, especially a grocer’s daughter from a quintessential middle class English background.

Modi, born into a poor OBC family, left home really early, joined the RSS, lifted, himself by the bootstraps and came up as an effective organiser at the grass-roots for the mostly upper caste-dominated BJP.

Both of them had transformative first terms which included taking rather unpopular and systemic changing decisions which pitted vast sections of the established media against the supposed “usurper”. This made their narratives even worse in the eyes of the mostly left-liberal media.

Baroness Thatcher believed that people need a helping hand and all people want to fundamentally improve their lot in life. She introduced the Housing Act of 1980 and gave the right to buy council housing – transforming Britain as a land of homeowners, opening up opportunities for the working and lower middle class to own their homes. PM Modi on his part unleashed series of programmes to empower the poor and give them dignity and improved public services where over 37 crore Indians or 370 million people have benefited from schemes launched by the Modi government. It was these labhaarthis (those who benefited from the various schemes of Jan Dhan bank accounts, Swaach Bharat, the toilets, the electrification programmes, the Pradhan Mantri Awas Yojana, the cooking gas scheme) who carried him to this massive victory.

Baroness Thatcher changed the taxation structure and reduced taxation and increased the tax base. The top rate reduced from 80 per cent to 60 per cent and the lowest rate from 33 per cent to 30 per cent for starters. With money from tax cuts in their pockets, shoppers began to rediscover the "feel good factor". Modi also worked hard to increase the tax net, reduce taxation and simplified the complex tax structure by bringing in the Goods and Services Tax (GST).

In essence, Thatcher transformed taxation, encouraged and empowered the working class and middle class and unleashed aspiration. PM Modi, through the Mudra Scheme, through Startup India, by direct transfers rather than doles, transformed the governance approach from that of a mai baap ki sarkar to that of a government that caters to the needs and aspirations of the common citizens. Both Modi and Thatcher believed in creating a nation of job creators and not job seekers. Startups became vogue in Modi’s India and Maggie openly encouraged the Asian corner shops as engines for the growth of the economy.

Aside from the domestic policies, both the leaders were successful in transforming the mindsets of countries that had lost their confidence in dealing with terrorism and external threats of aggression where countries such as Pakistan and Argentina were threatening them respectively. Thatcher called the Soviet bluff and the Argentinian bluff on Falklands and Modi called Pakistan’s bluff on nuclear weapons to the dismay of many world leaders and went on to do what he had to, to destroy terrorists that harm and/or kill Indians. Both brought forth a sense of pride in their respective countrymen.

Interestingly, both PMs were accused of bringing in social disharmony and ruining the social fabric of their countries. Both were conviction politicians and stood by their beliefs.

Baroness Thatcher’s second term was when she brought policies that changed Britain forever. Let us see what the second term of PM Modi heralds.

In the long term, Thatcher has been proven right on Europe, on terrorism and a variety of other things, although her legacy of removing social climbing ladders and not focusing on public services but intently focusing on inflation did do some substantial damage in terms of people’s lives.

Modi is far more pragmatic, and although a conviction politician, he has embraced the centre with a centre-left tinge when it comes to lifting people out of poverty without making them dependent on dole.