Modi’s Evolution: From Pradhan Sevak To Chowkidar To Reforms Pracharak 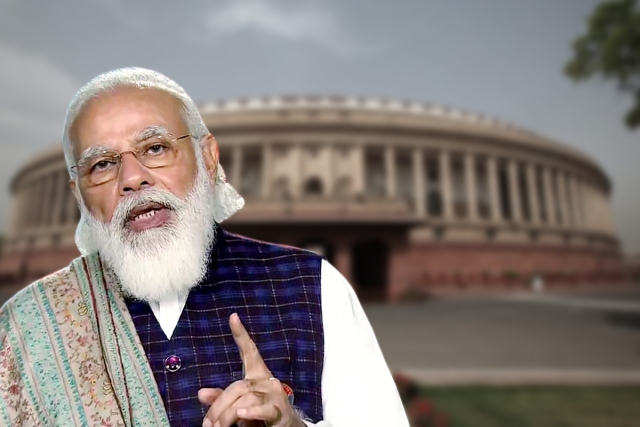 In two days this week, on 8 February in the Rajya Sabha, and on 10 February in the Lok Sabha, Prime Minister Narendra Modi delivered a masterclass in leadership and political chutzpah.

Widely seen as embattled over three reformist farm laws, Modi, far from throwing in the towel, went the whole hog to defend the laws, and held up a mirror to the disruptionists among them who were trying to make the farmer protests about something other than the farm laws.

While no one can presume that the standoff with the farm unions will end well with a compromise that keeps the reforms intact without anyone losing face, what was remarkable about the Prime Minister’s speech was his robust defence of the private sector and need for reforms in multiple spheres.

Not only did he bat for farm reforms, but he also warned that chronic abuse of private businesses was harmful to the nation.

In an indirect reference to the repeated demonisation of two of India’s big businessmen, (Gautam) Adani and (Mukesh) Ambani, the Prime Minister had this to say: “To use improper words against the private sector may have got votes for a few people in the past but those times are gone. The culture of abusing the private sector is not acceptable any longer.”

That Rahul Gandhi remained tone deaf goes without saying. In his speech yesterday (11 February), he reverted back to his refrain that the Prime Minister was beholden to cronies. Rahul talked about “Hum do, hamare do” to indirectly insinuate that Modi and Amit Shah were in cahoots to benefit Adani and Ambani. Clearly, Rahul’s learning curve has flattened as he has aged.

But Rahul Gandhi’s tone-deafness to reality is a digression here. What matters is what Modi said, and two of his other statements are worth quoting here:

He said: “Let us not see wealth creators with suspicion. Only when wealth is created, wealth will be distributed... Wealth creation is absolutely essential. Those who create wealth are India’s wealth and we respect them.”

This is a Prime Minister who has abandoned povertarian rhetoric – a staple in India’s political journey so far, where business persons are publicly abused but privately courted for election funds and other favours.

The Prime Minister also made his strongest pitch yet for private entry into new areas and for privatisation of public sector units. While the public sector was needed in many spheres, babus could not be running companies efficiently, he said.

He asked rhetorically: “Will the babus do everything? If one becomes IAS, will he/she do everything like running fertiliser industries, chemical industries or flying a plane... what are we going to achieve by handing over our country to babus? If babus belong to our country, so do the youth (who work in the private sector)”.

This is the clearest statement yet from the Prime Minister that the bureaucracy needs reform, and its focus area cannot be the running of public sector companies.

Defending the farm laws, Modi made a pitch for reforms in all fields. He said:

The status quo mentality will destroy the country. Agriculture is the basis of much of our economy and culture; our festivals are tied to agricultural cycles. We cannot neglect the sector and must do something now. As our population rises, land fragmentation will increase. We must, therefore, reform the sector and ensure that our farmers have the options to sell and grow their crops. Our ‘annadata’ (food providers) should be prosperous and it’s our responsibility to give them the opportunity to be so.

This Lok Sabha speech marks the culmination of a phase in Narendra Modi’s political and personal evolution. The Hindutva icon of 2002 became a development protagonist in 2007 and a messiah of the poor in 2014.

Starting 2018, when the drive against black money and the enforcement on the bankruptcy code saw a decline in business confidence, a new Modi started emerging.

In June 2018, Modi met leaders of India Inc before the general elections of 2019 to reassure them about India’s future, and followed this up with his Independence Day speech of 2019, where he extolled the contributions of “wealth creators”. Modi is now clearly the man with reformist credentials.

His speech in the Lok Sabha shows that he is willing to play the role of “reforms pracharak”, willing to sell the idea of reforms to the citizen despite the odds. If he does nothing else but sell the reforms India needs till his term ends in 2024, Modi will probably go down as India’s best Prime Minister ever.

In the remaining 27 months of his second term, he could well forge ahead of Jawaharlal Nehru, Indira Gandhi, Narasimha Rao and Atal Bihari Vajpayee as the man who transformed India.

A man who spent 15 years of his life as an RSS pracharak from 1973 to 1988 before he took on a political role in the BJP’s Gujarat unit, Modi has come full circle.

In 2014, Modi promised to be the country’s Pradhan Sewak, and serve as a Chowkidar to guard its national wealth. He is now Pradhan Pracharak for economic and social reforms.