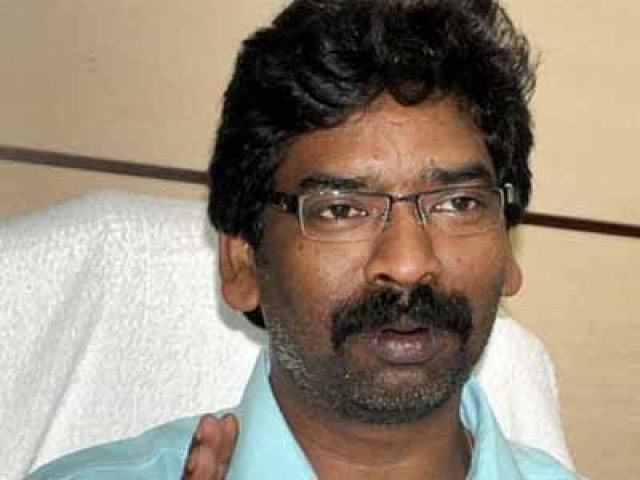 If the BJP wins Jharkhand, it will only be the beginning of a long arduous journey in a state where corruption and lawlessness are ingrained in the fabric.

No party in Jharkhand can say it did not get a chance to rule the state. The BJP ruled it for 86 of the 169 months, that the state has been in existence since 2000. Shibu Soren ruled it for 10 months, his son Hemant Soren for 17 months and Congress backed and controlled Madhu Koda ruled the state for 23 months. Nothing much changed. Yet, there is hope among the people that things will turn out for the better. The state’s highest voters’ turnout till now at 66 per cent is an indication of this aspiration and also a challenge before Prime Minister Narendra Modi, if the BJP actually gets a chance to form the next government.

Such a high turnout normally means that people have come out and voted either to defeat someone or to elect someone. Since there was an absence of either vengeance or support to any group during the campaign, neither of these can be said to be true. There could be a different reason for such a vote ― people have come to vote for a stable government in the hope that it would deliver. They have clearly fallen for Modi’s agenda in the absence of any other credible alternative politics. People had limited choice in the state.

This explains why the exit polls too have shown the BJP as winning in Jharkhand. People have rejected instability, corruption and nepotism. Now they look towards the BJP with hope that a different culture will permeate governance and deliver results. In fact, they look towards Modi to keep his eyes on Jharkhand to ensure that it gets a good leadership.

When young, Babulal Marandi was so violent against exploitation by local money lenders that he had picked up a sickle to kill one. He had fashioned himself on Shibu Soren, called “Guruji” by his followers. Marandi was later picked up by then BJP ideologue K.N. Govindacharya to lead the party. Marandi got his chance too, but failed to live up to the expectations. He failed like his “Guruji”. Others who followed him provided the leadership but failed to rise to the challenges that the new state offered.

In 14 years, the state has witnessed nine chief ministers and three terms of President’s rule. Jharkhand was carved out of Bihar as the country’s 28th state on 15 November 2000. First Chief Minister Babulal Marandi ruled for 16 months; he was succeeded by Arjun Munda. The BJP has been in power in the state four times ― thrice under Arjun Munda and once under Marandi. JMM chief Shibu Soren has been the chief minister thrice for two terms of five months each and one term on 11 days. His son Hemant Soren has been in the saddle since July 2013.

The state has the distinction of having a lone MLA as chief minister ― Madhu Koda who was involved in a multi-crore scam and loot of the state treasury. He led a ragtag coalition of non-BJP parties and was supported by the Congress. The reign of unchecked corruption and loot under Koda went on for 23 months. Five of his ministers were charged in corruption cases and sent to jail.

The bane of Jhakhand has been the absence of a visionary leadership, who could steer the state to progress and prosperity. A rich state with 40 per cent of the country’s mineral reserves could easily achieve better results. Thanks to the growth in the tertiary sector, Jharkhand has been able to maintain its status as a revenue surplus state. The bad news is, industries are shutting down and the manufacturing sector has suffered heavy losses. Modi’s plank of “Make in India” will need special focus in Jharkhand more so since he has promised jobs locally to the people.

Corruption, lethargy of administration and absence of a good law and order machinery have ensured that those who could afford to, have left the state for greener pastures. Tribal militancy is on the rise. This new tribal assertion is diverting the youth from turning productive and more integrated with the workforce.

Power, not ideology, has been the glue that has brought political parties together in Jharkhand. This has brought politics to a new low. Money earned through ill-gotten means both by politicians and bureaucrats have manifested in their palatial houses, lavish lifestyles and real estate investments. Real estate prices have skyrocketed and have become a haven for black money investment.

There are only two kinds of people in Jharkhand ― those who are benefiting from the system by participating in the loot and those outside, bewailing an unfair system. If you ask anyone which party can bring change, they say in one voice ― Modi. Nobody knows how the change will come, though.

The biggest menace are the Maoists. Beyond 5 km of state capital Ranchi in all directions runs the writ of Maoists. As the sun sets, the police recede in barracks and the militants take over. In smaller towns, local leaders have gained legitimacy as Maoist sympathisers or accomplices. Everyone in the locality knows who is what, but none dares to speak for fear of violent reprisals.

If the state plans any major police action, the Maoists are the first to know. A local leader of a Maoist-affected district wondered how the state can then succeed to rein in these mercenaries. Will there be a leader strong enough to take on the Maoist menace that is not only holding up the state’s progress but also pushing it backward?

Then there is also the problem of the mining mafia and their alliance with the state administration. Whatever discipline you may impose, you cannot prevent pilferage of coal. The local mafia has complete control over who runs the trade. The police are happy making themselves richer through a protection racket. Their only goal is to prevent its immediate adverse impact on the people.

People of Jharkhand had voted overwhelmingly for the BJP in 2014 Lok Sabha elections. The party won 12 of the 14 Lok Sabha seats. Modi captured their imagination as a leader who could deliver good governance. Going by that count, the BJP should win a majority of the 81 assembly seats as well. The state has been voting strangely at the local level. Family ties and local agenda counted more than a pan-state level agenda. So, no party could bet on winning the majority.

At the start of the campaign, the situation was not very clear. The Jharkhand Mukti Morcha, BJP and Congress were poised at the same level. None was sure to put the bet on any one party. On the eve of the first phase of polls, Chief Minister Hemant Soren said that there was “no Modi wave” in Jharkhand.

Things gradually changed after a bombardment of rallies by Modi, BJP president Amit Shah and other central leaders of the party. Modi addressed a rally each in all parliamentary constituencies. They have all drawn huge crowds. The prime minister has promised them deliverance, saying that the government at the Centre was for the poor and that the poor of Jharkhand must vote for the BJP for stability and good governance. He spoke at these rallies on how a step such as opening a zero balance bank account had helped the poor in the country.

If Modi is voted in Jharkhand as well, the BJP will face an uphill task. To bring governance to a place where few things move without paying bribes will be a major challenge. There is not even one known honest leader who has the capacity to hammer down transparency and good governance in the face of stiff opposition from power brokers. The state police is ill-trained or ill-equipped to deal with Maoist violence. The bureaucracy, used to co-option by the ruling elite, is not inclined for change.

Modi looks at things more positively. Most Jharkhand watchers would like to be proved wrong in their assessment; they wish to believe they were looking from the wrong end of the telescope. Who Modi nominates to lead will be his first major challenge.