National Herald Case: Why Sonia And Rahul Gandhi Need To Be Afraid 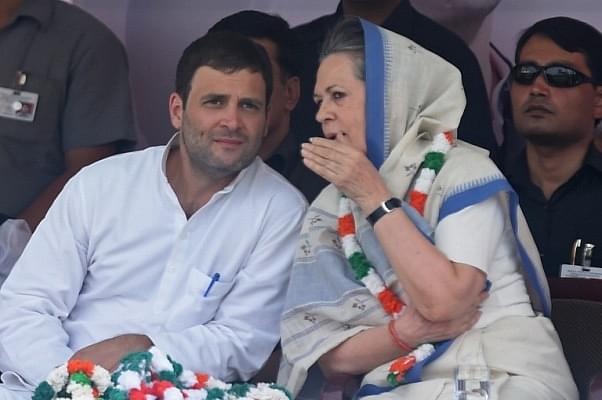 The Rs 5,000-crore scam involving Sonia and Rahul Gandhi looks like an open-and-shut case, if Subramanian Swamy’s allegations are true. So why has the BJP-led government been dithering over it? Such inaction could cost the party dearly.

After shocking observers in August by saying it failed to put a finger on any kind of evidence against accused Congress leaders in the National Herald case, the Enforcement Directorate (ED) has decided to reopen the related files, rekindling hopes in the rival political camp of pinning the Dynasty on the mat.

To the uninitiated, this is how the alleged scam shaped up.

What Is The Case?

Then in March 2011, Sonia Gandhi and Rahul Gandhi floated a firm called Young India Limited (some newspapers report the name as “Young Indian”), with mother and son each holding 38 per cent stake. This new firm proposed to buy the liabilities of AJL, which amounted to Rs 90.21 crore, for Rs 50 lakh to be taken out of the Congress coffers. Allegedly, the party also paid an additional Rs 1 crore for renovation of Herald House, situated at 5A Bahadur Shah Zafar Marg (the road in Delhi known as the “Press Area”). This is only one of the many properties AJL owns; its entire real estate wealth is estimated to be worth between Rs 1,600 crore and Rs 5,000 crore.

This amounts to misappropriation of property and criminal breach of trust, according to petitioner Subramanian Swamy. The metropolitan magistrate who heard him out agreed that there was indeed a prima facie case against the Nehru-Gandhis.

How Tax Payer Money Was Used To Promote National Herald

The goodwill the Congress enjoyed during the freedom struggle, Swamy says, helped AJL collect huge donations and buy properties at will. After becoming India’s first Prime Minister, “He (Jawaharlal Nehru) used government power to give National Herald land to build new buildings, (get) bank loans at cheap rates, etc and the company grew. Property-wise it grew very well. It had land all over India, huge amounts of land, buildings, etc.”

“But nobody was reading the newspaper. People said, ‘Why should we read Congress news? We will read other newspapers.’ The company started making losses. By 2008, it had accumulated a debt of Rs 90 crore. And at that time, National Herald decided ‘we can’t continue like this’, and they closed down the company. Once they closed down the company, Sonia Gandhi and Rahul Gandhi together put up (Rs) 5 lakh and created a new company called Young India,” Swamy said.

He continued, “And this Young India…Sonia Gandhi has signed; she is a director; she has 38 per cent, Rahul has 38 per cent; he has also signed. And there are two other directors also who have the remaining 24 per cent. One is Oscar Fernandes, the other is Motilal Vora.” Both are senior Congress politicians.

How Congress Party Funds Were Milked

Swamy said YI would tell National Herald that it would “arrange for loans for them to pay for these debts and YI would take the responsibility of discharging or clearing those (Rs) 90 crore (worth of) loan. National Herald will be free of debt. YI passed a board resolution. Motilal Vora was asked to go and speak to the newspaper.”

That is, Vora told Vora that Vora’s new company would clear the debt of Vora’s old company and, in return, Vora’s old company would transfer all its shares to Vora’s new company. “That meant that Rs 5,000 crore worth of property of National Herald would go to Young India. Young India had only Rs 5 lakh paid-up capital, but would get Rs 5,000 crore worth of property,” Swamy said.

“Sonia Gandhi then told Motilal, ‘Please ask the treasurer of the Congress to hold a meeting and give (Rs) 90 crore from the party fund to National Herald. Now the treasurer of the Congress was also Motilal Vora. So, Young India director Motilal Vora called up the president of the Congress, which was Sonia Gandhi, and Rahul Gandhi, and another general secretary Oscar Fernandes, who was also a director.” They then held a meeting of the party, Swamy alleged, and decided to give Rs 90 crore to National Herald. A resolution was passed to that effect, he said.

The next day, Swamy alleged, Sonia Gandhi opined that National Herald, which had rendered yeoman service to the nation during the freedom struggle, might not be in a position to pay the loan. So, Swamy said, the Congress president decided to declare the amount of Rs 90 crore as a “sick loan” or “non-performing asset” and write it off. Then another resolution was passed by the Congress, writing off the loan, Swamy alleged.

If this entire story narrated by Swamy is true, it means Sonia and Rahul Gandhi’s company became the owner of Rs 5,000 crore worth of property without paying anything for it. That is a financial scandal indeed.

The scandal acquired a bigger proportion when Young India rented out the Press Area property, allegedly acquired for free, for all kinds of government services and earned about Rs 60 lakh a month in the process. As a matter of fact, that government was led by the Congress, too. Since the government runs on taxpayers’ money, it implies Rs 60 lakh went out of ordinary citizens’ pockets every month to enrich Sonia and Rahul Gandhi’s company. This is beside the illegality involved in the act by the Congress, a political party, of lending money for commercial purposes. Swamy has, therefore, challenged the Congress under Section 29A to C of the RPA (1951) and Section 13A of IT Act (1961).

At the magistrate court, Swamy deposed as a witness in July, accusing Sonia Gandhi, Rahul Gandhi, Oscar Fernandes and Motilal Vora of “fraud, (offences under Section 420), breach of trust, conspiracy,” etc. “If convicted, they will go to jail for 27 years,” Swamy asserted.

How The Congress Fought Back

However, reminiscent of his infamous “zero loss” conjecture in the 2G spectrum scam, Kapil Sibal has defended the Dynasty in the court, calling it an internal matter of the company YI,questioning Swamy’s locus standi in the case as the BJP leader is not even a shareholder of the companies involved in the deal. While Sibal’s defence attracts ridicule, what flummoxes observers is the ED’s flip-flop on the issue.

Last month, when the agency said it could not figure out what was wrong in the deal, Swamy saw “political influence from the Congress to close the case”. But Secretary in the Department of Heavy Industries and Public Enterprises Rajan S Katoch, who was additionally the ED director till last month, was an appointee of this NDA government,enjoying the third extension of his service as ED head since August 2014. While he has been removed from ED now, does this not mean that bureaucrats even of the NDA’s choice can do the UPA’s bidding in the government?

Swamy feels otherwise. He attributed Katoch’s ‘lethargy’ tothe babu’s proximity to Congress general secretary Digvijaya Singh. It seems that the Congress has spawned so many lackeys in the decades that it ruled the country, that the NDA can hardly identify any bureaucrat as ‘safe’ and entrust him with the task of cornering the Dynasty.

Even theCBI has not initiated a thorough probe to ascertain whether the AJL-YI deal amounted to cheating and misappropriation of funds yet. And the Income Tax department is studying the monetary transactions involved in the acquisition.

Is The Judiciary Being Too Slow?

What is transpiring in the judiciary concerning this case also is befuddling. Even as a magistrate’s court is hearing the case, the Delhi High Court has intervened in the matter and the Supreme Court has said it couldn’t fast-track the case.On 1 August last year, the High Court had readily accepted Sibal and Abhishek Manu Singhvi’s plea to summon Swamy instead for an explanation of his case.

In the same month a few days later and then again in December last, it issued a stay order on the summons served to the Nehru-Gandhis. After the lower court decided to hear the case again on 9 December, 2014, the High Court’s Justice V.P. Vaish recused himself from hearing the case on 12 January this year, saying the schedule did not suit his roster. He asked for a transfer of the case to a different bench and got it. While petitioner Swamy was concerned about the delay it would cause, the High Court refused to entertain his plea.

When a hassled Swamy approached the Supreme Court to get some reprieve against a delay that appeared unnecessary, the highest court of the countrydismissed his plea, redirecting him to the high court.

To the lay, these legal technicalities of stays, long gaps between hearings and the collective act of the judiciary of forcing a petitioner to run from pillar to post comes across as anything but a sound justice delivery system. Worse, these actions make the masses look at the judges’ decisions with suspicion.

Politically, the procrastination on the case would hurt the BJP more. Its supporters are still not sure what took the ruling party so long to revoke Robert Vadra’sno-frisking privilege at airports. It is also not clear why the party had to wait for its government to be formed in Haryana to begin investigating the Damadji (Son-in-law) they had attacked through pre-election pamphleteering.

Even before Manohar Lal Khattar’s dispensation replaced Bhupinder Singh Hooda’s in Haryana, the ED and IT department, which are part of the Union government, could have initiated action against him. The ED woke up finally to one of many murky deals — theBikaner “land grab” case — involving Vadra yesterday. How does the BJP explain the hold-up? If it says action in 2014 would have been construed as vendetta or witch hunt, but it won’t be so in 2015, that would be really funny.

In the political arena, voters don’t buy the official line that the judiciary is independent; they say the party they voted for could not fix the party they voted against. The inability of the Narendra Modi government to succeed in courts will work in its supporters’ minds over and above its refusal to terminate UPA government’s populist and leakage-ridden MGNREGA and Food Security Act and amend the ridiculous Right to Education law.

Already, conspiracy theories are doing the rounds to explain how J. Jayalalithaa, who everybody had decided was corrupt since 1996, was declared innocent in 2015, and how suddenly there is no talk of Trinamool Congress’s Saradha scam. These “compromises” are to shore up support for the NDA in the Rajya Sabha, many reckon. But why the BJP should have a backroom deal even with the Congress is something no conspiracy theorist can explain.

But potential voters can turn indifferent in 2019, not caring for credible explanations. Popular right winger Subramanian Swamy’s non-inclusion in the Cabinet, his act of  lending credence to the voices against Finance Minister Arun Jaitley  and his act of floating the Virat Hindustan Sangam will only add to the disillusionment. If you cannot give him a post, at least give him the justice he seeks. Or, have the courage to say his case has no merit.