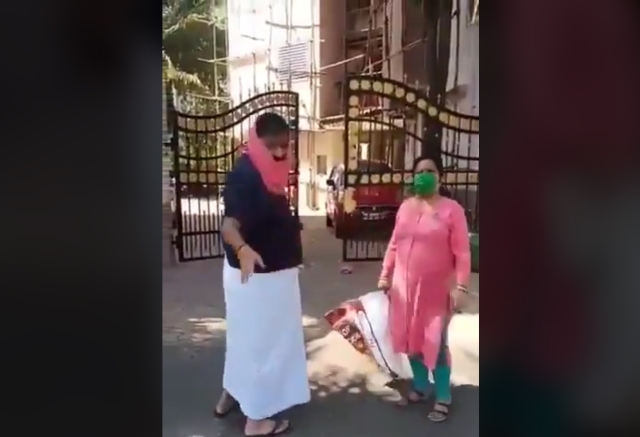 Screengrab of the video that was recorded by the delivery man

The state of Maharashtra, and especially its capital city Mumbai, are witnessing a surge in the number of positive Coronavirus patients. The Mumbai metropolitan region has been ordered to follow the lockdown. However, home delivery of goods are being allowed.

On 21 April, a Mumbai resident named Gajanan Chaturvedi was booked under IPC section 295 (malicious act of outraging religious feelings) for allegedly refusing to take delivery of a parcel from a Muslim delivery man. The first information report (FIR) was filed at Kashimira police station on the statement of the delivery man named Barkat Patel.

Several publications such as Outlook India, Business standard and The Week published the report put out by news agency PTI. Several newspapers such as the Indian Express also reported it.

“A 51-year-old man who refused to collect groceries from a delivery man after learning that he was a Muslim was arrested in Mumbai on Tuesday, hours after his Islamophobic comments were recorded on video by the employee,” said the Indian Express report.

Chaturvedi has been released on bail.

On 24 April, he put out a video statement presenting his side of the story, saying that he was not given a proper hearing before the FIR, which was filed under pressure. In the video, Chaturvedi, 51, also says that he never mentioned religion.

(Chaturvedi gave the statement in Hindi which has been translated by Swarajya, as below):

In the beginning, Chaturvedi says that someone has lodged an FIR against him under IPC 295. He further states that FIR has been lodged under someone’s pressure, but he doesn’t know who is behind it. He says the police should have heard his version before registering the case, and the FIR has been filed without knowing the truth.

“My elder daughter lives in Hyderabad. She had ordered something online to be delivered at out house. The man came with a parcel. I, along with my wife, went downwards to take it. However I did not like the man‘s behaviour. He was sitting on the scooty. With one hand, he was checking his mobile and with another, he was scratching his face which was not covered by the mask. He was not even wearing gloves.

“I got tensed as it is the times of a pandemic. It’s a time when people are not touching even their own faces. I asked where he had come from. He said, Naya Nagar. I said, how can you come from Naya Nagar as it is said to be a place with a high number of positive cases and people are not even allowed to go out from there. I said do one thing, take it back. I am not taking it.

“He asked why I am not taking it. I said it’s because the area he had come from, was a highly infected area and you are also constantly touching your face. I turned to go back inside my house when he started making a video. In the video, he was saying that I am not taking the parcel because he was a Muslim. However, not even once did I mention religion.

“Tell me, if even once did I mention that I was not taking the parcel because he was a Muslim? I told him he can say whatever he wants to, but I will not take it as my safety is in my own hands. If I become positive, my children will also become positive. I told him he should show his own face in the video too, which would have revealed that he was not wearing a mask, but he did not do so. Now tell me, why I was wrong. He then went and filed the FIR.”