No Surprises Here: Meghalaya Has Been A Communal Cauldron Since Four Decades Before The Forced Removal Of Ganesha From NIT Campus 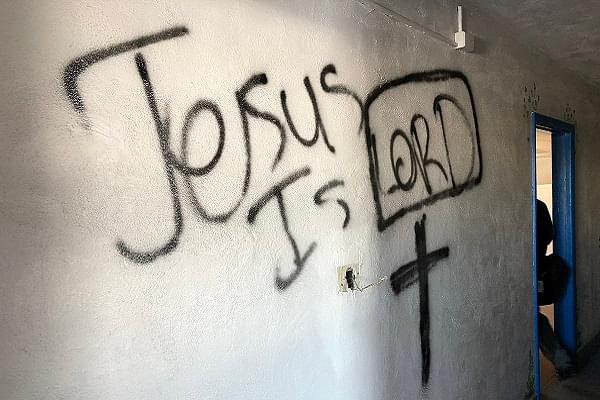 One of the messages scribbled on temple walls (@Billy_Kobin/Twitter)

Religious intolerance is not new to the Christian-majority hill state of Meghalaya. The removal of a murti of Lord Ganesh from the Centrally-funded National Institute Of Technology (NIT) in Meghalaya is but the latest in a series of displays of religious intolerance.

Religious intolerance had been rearing its ugly head for many decades in Meghalaya, the ‘abode of clouds’ (as the state was named by S P Chatterjee, a professor emeritus of Calcutta University). In fact, even before the state was carved out of Assam, instances of the Christian clergy instigating the tribals to oppose religious functions of Hindu non-tribals used to abound.

Since these incidents were minor in nature, they were never officially documented.
The first major incident of religious intolerance in the hill state where Christians form 74 per cent of the population happened on 22 October 1979.

A couple of young Khasi boys (Khasis are one of the three major tribes in the state) desecrated a murti of Goddess Kali that was being readied for immersion a day after Kali Puja at a community puja pandal in the largely residential neighbourhood of Laitumkhrah of state capital Shillong.

A scuffle broke out after the desecration and it soon blew up into a full-scale attack on Bengali Hindus.

The dorbar shnong (tribal village council) imposed a fine on Bengali Hindus, asked businessmen from the community to close their establishments, urged Khasi house-owners to evict Bengali Hindu tenants and even banned worship by Hindus in any place other than temples.

The state government did nothing to stop this blatant travesty of the law.

Khasi vigilantes started targeting Bengali Hindus and many were attacked, injured, maimed and killed, and their homes and business establishments looted.

The most horrific attack took place at a village called Laitlyngkot on the road between Shillong and Dawki on the Indo-Bangladesh border.

Eight Bengali Hindus on a Shillong-bound bus from Dawki were asked to disembark and stoned to death.

The attacks and persecution of Bengali Hindus led to an exodus of over 20,000 members of the community in 1979-1980. What emboldened the murderous mobs of Khasi youngsters, who were believed to have been egged on by the evangelical Church, was the immunity from prosecution that the state accorded to them.

Since 1979, not a single person guilty of rioting, assault, murders, rapes and other crimes directed against Bengali Hindus, or Hindus from other communities like Marwaris, Gorkhas, Gujaratis, Sindhis etc, has been prosecuted.

When matters got out of hand in October 1979, the state government imposed a curfew which was observed in violation.

Ultimately, the Assam Rifles and CRPF had to be deployed to restore law and order. However, the state police did not prosecute any of the hundreds of rioters who were responsible for attacks on Hindus.

After 1979, the hatred and discrimination against, and the persecution of Dkhars (the Khasi term for non-tribals) became institutionalised. And attacks on Dkhars, all of them Hindus, became a regular feature nearly every other year.

A sinister pattern emerged: youth organisations like the Khasi Students’ Union that have been notoriously anti-Dhkar would give a call for ousting Bangladeshi infiltrators or would find a reason to launch an agitation.

This would be the signal to launch attacks on Hindus belonging to different communities.

Over the past four decades, a large number of Hindus have been forced to leave Meghalaya.

Ironically, though anti-Dkhar agitations and movements in Meghalaya have always crystallised from the anti-foreigners’ (read: anti-Bangladeshi infiltrator) rhetoric, Muslims have not been targeted. And while the Muslim population has registered a steady increase in the state, the number of Hindus has declined sharply.

The rise of insurgency in Meghalaya from the early 1990s exacerbated matters for Hindus in the state. The insurgents, initially handled with kid gloves by the state administration, targeted businesses run by Hindus and started extorting huge sums of money from them.

Even professionals like doctors and lawyers and the salaried class in the government and private sectors was not spared.

It was only when matters got out of hand and the insurgents started targeting the indigenous tribals of the state that the state government launch a hard offensive against the groups.

The tumultuous decades from the early 1980s onwards saw a number of restrictions imposed on Hindu festivals, especially Durga Puja celebrations. State authorities would restrict the ‘visiting hours’ for Puja pandals (usually from morning till early evening), the number of dhakis (traditional drummers) who could perform, the use of loudspeakers and even the number of devotees who could stay overnight in the Puja pandals.

But the hostility of Christian Khasis was not limited only against Hindu non-tribals. Allegedly backed by the Church which saw the Seng Khasis (followers of the traditional faith of the tribe) as the last hindrance to their evangelism, the Khasi Christians have often been at odds with their brethren (read this).

Many attempts have been made by Christian Khasis backed covertly by the Church and the state to impose curbs and discourage Seng Khasi festivals and functions.

Religious intolerance thus has a long and inglorious history in Meghalaya. The forced removal of the murti of Lord Ganesh is but just the latest manifestation of this intolerance.

The argument advanced by those who forced the NIT director to remove the murti is that a religious object has no place in a government-funded institution. However, portraits of Jesus and the crucifix can be seen in many government offices and institutions in the state.

A legal advocacy group — the Legal Rights Observatory — has urged the state government to remove all religious symbols from all government institutions in the state.

The group has cited the case of the Civil Hospital in Shillong where copies of the Bible are kept beside the beds of patients. There are many statues of Jesus erected on government lands in the state, one prime example being a towering one (see map) just at the entrance to Shillong.